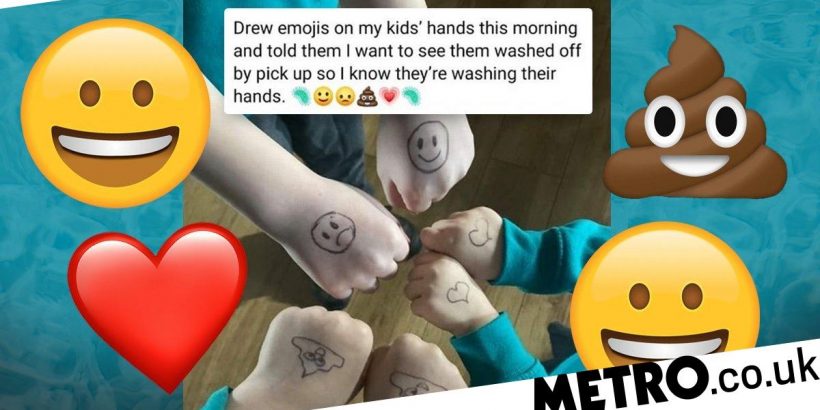 A mum has come up with a clever trick to help protect her kids from coronavirus by getting them to wash their hands more.

The woman shared her simple idea in the Facebook group Hinch Army Cleaning Tips, and hundreds of people have liked it and said they were going to try it themselves.

The mum posted a picture of her three children holding out their hands – each hand had a cute emoji drawn on them.

‘Drew emojis on my kids’ hands this morning and told them I want to see them washed off by pick up so I know they’re washing their hands,’ she wrote on her post.

Parents can get creative with what they draw, and kids can even pick their favourite emoji to make sure they’re engaging with the game.

The handy tip comes amid the outbreak of the coronavirus pandemic across the globe, and official guidance says that frequent hand washing is the best way to protect yourself and others from germs.

But kids are less likely to respond to official guidance from the Government, so this emoji tip is a good way to get them washing their hands for a more fun reason.

The original post on Facebook has now amassed more than 4,000 likes, and parents are heaping praise on the idea.

‘This is a good idea just to see how well they get washed!!’ enthused one woman.

‘Just spoke to my son about when he washes his hands at school and he said they only have to wash them before dinner,’ added another concerned parent.

Someone else wrote; ‘everyone should be doing this! Adults too lol.’

Although one mum does think she might have spotted a flaw in the plan.

‘Great idea! Although my wee guy would want to keep the poo emoji,’ hmm… good point.