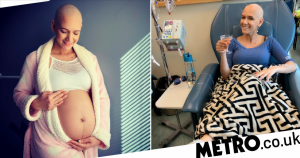 Sangela Martins went for her first pregnancy appointment at 11 weeks and was relieved to see a healthy baby.

But just three weeks later, another scan showed a tennis ball-sized cyst on her left ovary.

And just two weeks after that, it had grown to the size of a basketball.

Sangela says her baby saved her life as it meant she was diagnosed and treated with ovarian cancer quickly.

Sangela has now been given the all clear and both mum and baby are doing well.

Sangela, a nanny, said: ‘When my husband Jay, 30, and I found out we were pregnant, we were super excited because we were about to celebrate my first daughter, Maya’s, birthday and thought a new brother or sister would be the best gift for her.

‘I went to visit my family in Brazil as that’s where I’m originally from, came back, and had my first pregnancy appointment and everything was really good.

‘Then I went for my 14 week checkup and the nurse noticed a tennis ball-sized cyst, and said to keep an eye on it.

‘It was shocking because I was at the doctors almost three weeks before and all of a sudden it had appeared.’

At first, doctors were not sure what was wrong or how it would affect her pregnancy.

She added: ‘I was thinking about what could happen to my baby more than myself.

‘I had surgery to remove the cyst and ovary at 17 weeks, and after two hours of waking up I was put in the waiting room and told I had ovarian cancer.

‘It was scary because all the hormones in my body that were keeping my baby healthy were actually feeding the cancer, and the monster was right next to her.

‘After a month of recovery from the surgery, I had nine sessions of chemo and the toughest part was when my hair started falling out.

‘But when that was over, my hair started growing back and started to regain my strength, so I was more focused on the baby and recovering.

‘The moment she came into the world the first thing I said was ‘we did it’.

‘If it wasn’t for her, I wouldn’t have had an ultrasound and found out about the cyst – by the time they would have found it if I wasn’t pregnant, it would have spread.’

When doctors first found the growth on Sangela’s ovary in early October 2019, they decided to monitor it, but two weeks after the appointment she began to suffer excruciating back pain.

The mum struggled to sleep through the aches and called the doctors before her next pregnancy checkup, who then found the cyst had shockingly doubled to the size of a basketball.

Sangela said: ‘One night my back was hurting again, and I was holding onto the walls because my body was shaking in pain – the cramps were so bad it felt like I was about to give birth.

‘My husband took me to the emergency room and mid-way through the hour-and-a-half journey there, all of a sudden the pain stopped, it was crazy.

‘After waiting in the emergency room, doctors said the cyst had ruptured and the liquid that was in it had spread around my body, but it was going to be fine and I just needed some rest.

‘I still had an appointment with a specialist the week after where they took a blood test and found my cyst had a solid part inside, but they didn’t yet know if this was cancerous or just a germ cell tumour.

‘I sat in my car bawling my eyes out for three hours because I was thinking, if I did have cancer, who would raise my daughter if me and my baby didn’t make it.

‘It all happened so quickly and I didn’t have time to soak it in but I was trying to be strong because if my baby came to save me, I had to save her too.’

Sangela had urgent surgery in late October 2019 at 17 weeks to remove the cyst for testing and she received the devastating diagnosis of ovarian cancer the same day.

But the strong mum powered through two months of intense chemotherapy starting in November 2019, and has been in recovery ever since and will now attend checkups and scans every six months.

Sangela added: ‘Doctors told me there weren’t many cases of pregnant women with ovarian cancer, which made me feel alone because I didn’t know what was going to happen.

‘I wanted to share my journey and hopefully help someone else who’s alone to feel more positive.

‘My doctor has told me to think twice about having more kids and strongly suggested I have my other ovary removed because the cancer could come back, which I do want to do.

‘It has been a long and scary journey, but one that brought me to believe in myself like I never did before.

‘I’m very thankful to be here with my daughter and I will always say that she saved my life.’

Do you have a story to tell? Get in touch at [email protected]