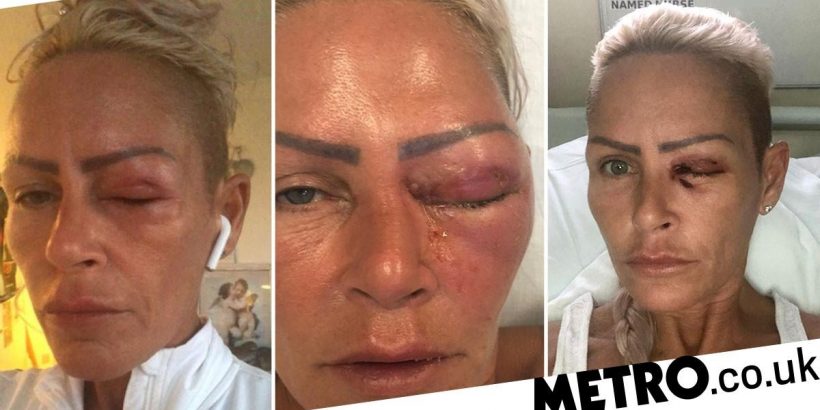 Mum Claire Taylor thought little of it when she caught herself on a car door and sustained a tiny cut to the corner of her left eye.

But within 36 hours, the 47-year-old’s face had swollen dramatically and she had become delirious, drifting in and out of consciousness.

The only other person at home with Claire, from Essex, was her daughter Carmen, then six, who did not realise how ill her mum was.

But luckily Carmen managed to open the door to a friend of Claire’s – who had become concerned after hearing how groggy she sounded on the phone – and paramedics were called.

She was blue-lighted to hospital and diagnosed with cellulitis – a potentially serious infection affecting the deeper layers of the skin.

Despite medics fearing she would lose her left eye, they managed to save it – but Claire has been left with ongoing balance problems after the build-up of fluid and pressure affected her brain.

Since the accident last summer, Claire, has now rebuilt her life and become a fashion designer.

Claire said: ‘If my friend hadn’t decided to check on me, I believe without a doubt I’d be dead.

‘Poor Carmen would have been in the house with me. It doesn’t bear thinking about. She was petrified and didn’t want to look at me for a while when my eye was still swollen.

‘I’ve spoken to her since and explained how to call 999 and what to say and now I want to spread the message to other parents that it’s important kids know what to do in an emergency.’

When she first got the cut, Claire had gone to the pharmacy to buy a cream to keep the area clean.

But by then, the cellulitis infection had already set in. Later that afternoon, she decided to take Carmen for a bike ride, during which the little girl accidentally kneed Claire in the eye.

When she woke up the next day, Claire was delirious and thankfully her friend came to check up on her and was able to call an ambulance.

Hospital tests showed that the levels of infection in Claire’s blood were extremely high and she was diagnosed with orbital cellulitis – a serious infection and inflammation of the soft tissue surrounding the eye.

She said: ‘At that point, I hadn’t looked in the mirror, so didn’t realise how swollen my face was.

‘I was so delirious that I could see and hear things happening around me, but was virtually unconscious.

‘At first, I wasn’t responding to treatment and a few days later, I heard a medic say: “This girl’s going to lose her eye.” I’m not easily scared, but I was petrified at that moment.’

Still believing she was going to lose her eye, Claire managed to be positive, even designing her very own prosthetic from her hospital bed.

She added: ‘I’m quite a roll with the punches kind of person, so I thought, “Okay, I’ll lose my eye. But I’ll have the most amazing false eye in the world.”

‘I wanted it to be really glam and different, covered in Swarovski crystals.’

Thankfully, Claire’s eye was saved, and after eight days, she was discharged.

But Claire was still left with some balance and vision problems, which slowed her recovery and meant she didn’t feel anything like herself for another three months.

‘The vision in my right eye is fine, but I can’t see people or things at all if they’re on my left-hand side,’ she said.

‘I’ve also still got balance problems to this day. At first, I was really weak and fatigued. I’d pass out on the sofa and sleep for hours on end.’

Being so gravely ill reaffirmed Claire’s belief that life must be lived to the full and gave her the motivation to realise a long-standing dream and design her own fashion line.

Do you have a story you want to share?