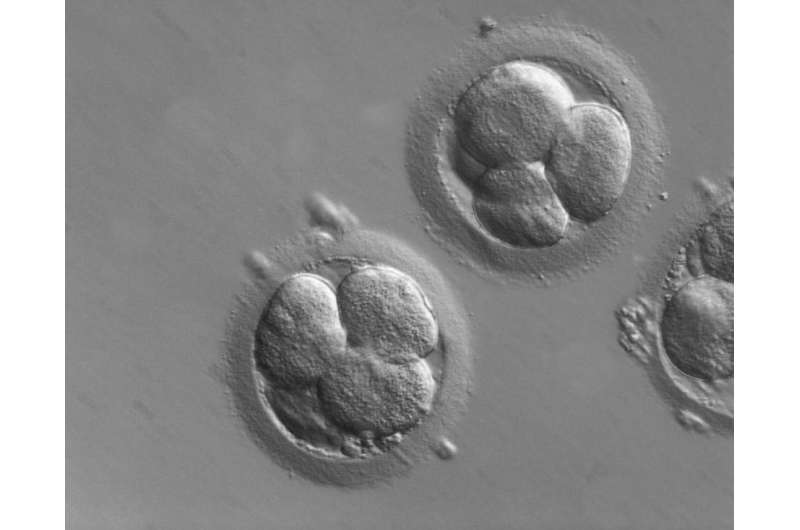 Many state legislatures are seriously considering human embryos at the earliest stages of development for legal personhood. Total abortion bans that consider humans to have full rights from the moment of conception have created a confusing legal domain that affects a wide range of areas, including assisted reproductive technologies, contraception, essential medical care and parental rights, among others.

However, an important biological feature of human embryos has been left out of a lot of ethical and even scientific discussion informing reproductive policy—most human embryos die before anyone, including doctors, even know they exist. This embryo loss typically occurs in the first two months after fertilization, before the clump of cells has developed into a fetus with immature forms of the body’s major organs. Total abortion bans that define personhood at conception mean that full legal rights exist for a 5-day-old blastocyst, a hollow ball of cells roughly 0.008 inches (0.2 millimeters) across with a high likelihood of disintegrating within a few days.

As an evolutionary biologist whose career has focused on how embryos develop in a wide variety of species over the course of evolution, I was struck by the extraordinarily high likelihood that most human embryos die due to random genetic errors. Around 60% of embryos disintegrate before people may even be aware that they are pregnant. Another 10% of pregnancies end in miscarriage, after the person knows they’re pregnant. These losses make clear that the vast majority of human embryos don’t survive to birth.

The emerging scientific consensus is that high rate of early embryo loss is a common and normal occurrence in people. Research on the causes and evolutionary reasons for early embryo loss provides insight into this fundamental feature of human biology and its implications for reproductive health decisions.

Intrinsic embryo loss, or embryo death due to internal factors like genetics, is common in many mammals, such as cows and sheep. This persistent “reproductive wastage” has frustrated breeders attempting to increase livestock production but who are unable to eliminate high embryonic mortality.

In contrast, most embryo loss in animals that lay eggs like fish and frogs is due to external factors, such as predators, disease or other environmental threats. These lost embryos are effectively “recycled” in the ecosystem as food. These egg-laying animals have little to no intrinsic embryo loss.

In people, the most common outcome of reproduction by far is embryo loss due to random genetic errors. An estimated 70% to 75% of human conceptions fail to survive to birth. That number includes both embryos that are reabsorbed into the parent’s body before anyone knows an egg has been fertilized and miscarriages that happen later in the pregnancy.

An evolutionary drive for embryo loss

In humans, an evolutionary force called meiotic drive plays a role in early embryo loss. Meiotic drive is a type of competition within the genome of unfertilized eggs, where variations of different genes can manipulate the cell division process to favor their own transmission to the offspring over other variations.

Statistical models attempting to explain why most human embryos fail to develop usually start by observing that a massive number of random genetic errors occur in the mother’s eggs even before fertilization.

When sperm fertilize eggs, the resulting embryo’s DNA is packaged into 46 chromosomes—23 from each parent. This genetic information guides the embryo through the development process as its cells divide and grow. When random mistakes occur during chromosome replication, fertilized eggs can inherit cells with these errors and result in a condition called aneuploidy, which essentially means “the wrong number of chromosomes.” With the instructions for development now disorganized due to mixed-up chromosomes, embryos with aneuploidy are usually doomed.

Because human and other mammal embryos are highly protected from environmental threats—unlike animals that lay eggs outside their bodies—researchers have theorized that these early losses have little effect on the reproductive success of the parent. This may allow humans and other mammals to tolerate meiotic drive over evolutionary time.

Counterintuitively, there may even be benefits to the high rates of genetic errors that result in embryo loss. Early loss of aneuploid embryos can direct maternal resources to healthier single newborns rather than twins or multiples. Also, in the deeper evolutionary history of a species, having a huge pool of genetic variants could occasionally provide a beneficial new adaptation that could aid in human survival in changing environments.

Although required in some states, early embryo loss is typically not documented in the medical record. This is because it occurs before the person knows they are pregnant and often coincides with the next menstrual period. Until relatively recently, researchers were unaware of the extremely high rate of early embryo loss in people, and “conception” was an imagined moment estimated from last menstruation.

Errors that occur during chromosomal replication are essentially random, which means development can be disrupted in different ways in different embryos. However, while both early embryos and late fetuses can become inviable due to genetic errors, early and late abortions are regulated very differently. Some states still require doctors to wait until the health of the pregnant person is endangered before allowing induced abortion of nonviable fetuses.

Since so many pregnancies end naturally in their very earliest days, early embryo loss is exceedingly common, though most people won’t know they’ve experienced it. I believe that new laws ignoring this natural occurrence lead to a slippery slope that can put lives and livelihoods at risk.

Between 1973 and 2005, over 400 women were arrested for miscarriage in the U.S. With the current shift toward restrictive abortion policies, the continued criminalization of pregnancies that don’t result in birth, despite how common they are, is a growing concern.