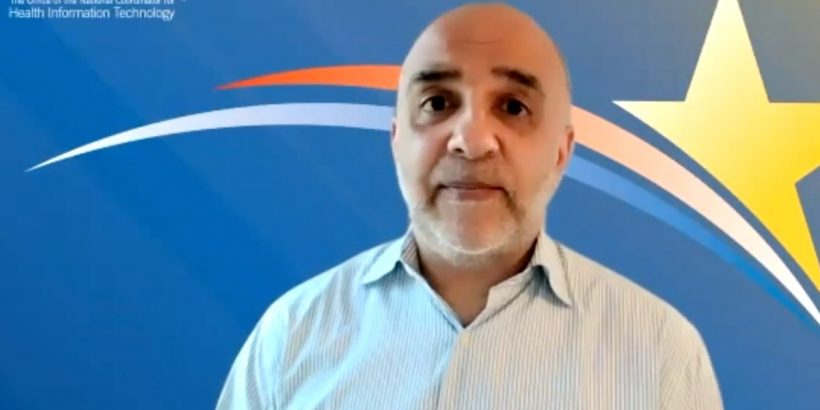 Although the state of the pandemic has been looking better in the United States recently, National Coordinator for Health IT Micky Tripathi says we’re not out of the woods yet.

But technology can help ensure a more seamless response moving forward, he said.

One job for inter-agency task forces, he noted, will be considering: “What are the challenges we experienced in the pandemic? What are those gaps, and how do we characterize them, and what does that say about the investments we should make in the future?”

During a presentation at the DirectTrust Summit 2021 this week, Tripathi recognized the leaps and bounds the country has achieved when it comes to data-sharing and interoperability and outlined the goals his agency has for keeping up the momentum.

“We’ve really in a very short time – but with a lot of money and a lot of blood, sweat and tears – we’ve gotten that foundation laid” for modernizing the country’s health system, he said.

Now, “we need to figure out what we want to do with the foundation,” he said.

One overarching goal will be to make infrastructure available to serve users’ immediate needs.

“How does that foundation – the basic health IT systems, interoperability capabilities, the ability to have apps – all of that together, how do we sort of think about that as the portfolio we want to build on?” he said.

“So that users at the end of the day have a full awareness of the kinds of capabilities that are available to them – so their first instinct isn’t to say, ‘Let me just fax that, it’s a lot easier,'” Tripathi laughed.

When it comes to the info blocking rules – which are causing some confusion among providers – Tripathi said the agency is moving forward with outreach on education and preparation, as he said he would be during our recent interview with him.

More important than ensuring compliance alone, he said, is helping organizations realize the opportunities the rules can present.

“There is an obligation on the part of everyone in the ecosystem” to do their part toward more seamless information exchange, said Tripathi.

Regarding TEFCA, ONC is “thinking hard about where we are and how TEFCA can be an enabler for improving interoperability in a variety of ways,” he said.

“What is it that we want out of networks? How can TEFCA be an enabler of all of that?” he continued.

In addition, his team “takes very seriously” the “coordinator” aspect of the agency’s title, he noted.

“A wider variety of federal agencies are getting involved and thinking about the things they can do with health IT to support their missions,” said Tripathi.

The challenge, of course, is “making sure that isn’t a cacophony of disparate voices tearing apart the industry by going off in different directions,” he added.

Overall, he said, “we have to keep focusing on things that the user finds valuable.”