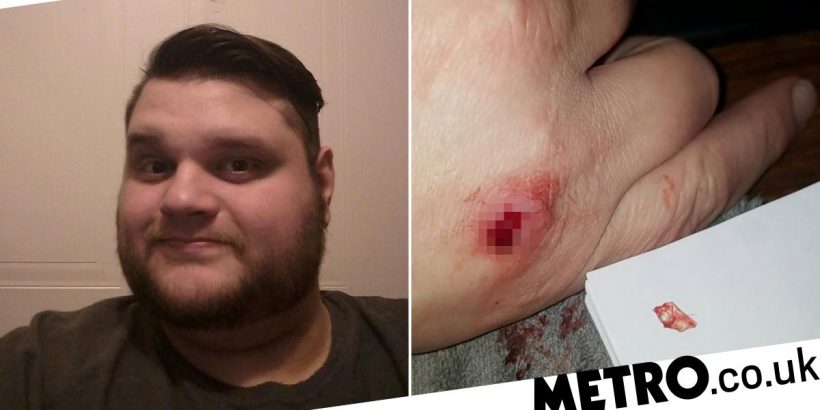 A man who survived a car crash has just pulled a shard of windscreen glass from his hand – nearly four years after the accident.

Albert Wisdom, 30, spotted a lump poking out of a cut in his hand.

The pizza delivery driver from Alabama, U.S, tugged it to the surface and after pulling it out, he realised it was a shard of glass which had been there since 2017.

Four years ago he was involved in a traumatic road accident where his hand went through the windscreen of his truck.

Albert explained: ‘I scraped my hand and looked down to see it poking out of the cut – I couldn’t believe it.

‘It’s mind-boggling that it was in my hand for so long.

‘After the accident was a really dark time for me, because I used to have nightmares and flashbacks to the moment of the crash.

‘All my other injuries are healed now, so that was the last thing reminding me of the accident – and now I feel I have some closure.’

The car crash in early 2017 saw Albert’s car collide head-on with a drunk driver while on his way to a night shift.

The accident, which took place on a motorway near his home in Cullman, Alabama, left him unable to walk properly for more than a year.

Albert said: ‘I remember waking up in the driver’s seat and seeing blood everywhere.

‘For nearly a year after the accident I was having flashbacks where I would relive that moment.

‘It was a really dark period, because after that I had to learn how to walk again and I didn’t know if I’d ever fully recover.’

Albert’s right leg was left shattered and needed surgery, and his hand was left in tatters.

He pulled the glass out on December 27.

Albert added: ‘It’s pretty crazy how the body works, that glass was just in my skin for years without me even noticing.

‘After I began to notice it, I’d see it all the time, whenever I was out driving I’d see the lump on the back of my hand and it would remind me.

‘Now I can walk again, I no longer have nightmares or flashbacks, and it feels symbolic now the last piece of glass has come out, so I can move on from what happened.’

Do you have a story you want to share?