In a small clinical trial, patients with major depressive disorder (MDD) who were given two doses of psilocybin along with psychotherapy showed a reduction in depressive symptoms. The psychedelic’s therapeutic effects persisted for up to 4 weeks with minimal side effects. 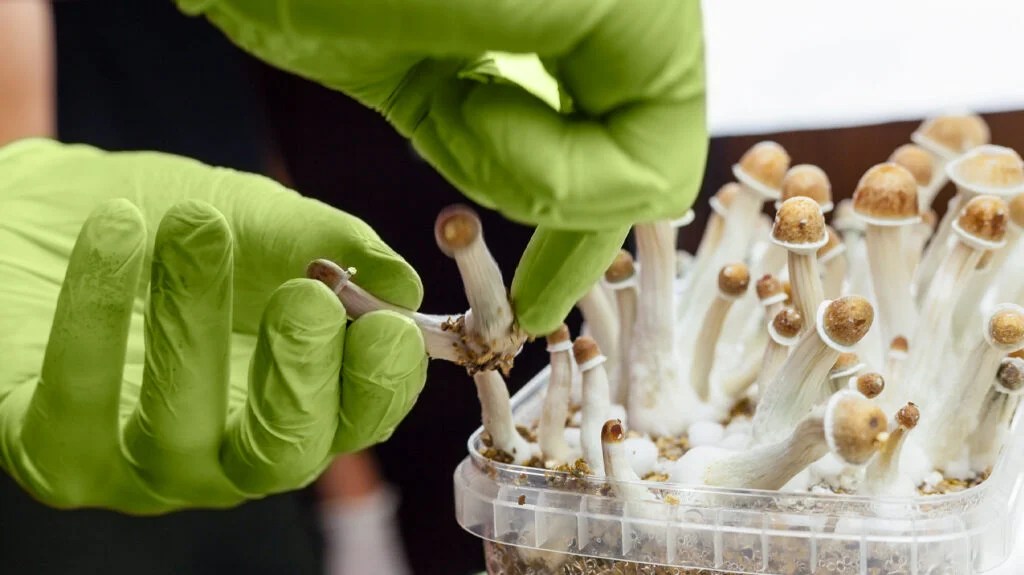 Psychedelics are known for their hallucinogenic properties, but their mind-altering effects may also benefit people with depression.

According to the National Institute of Mental Health, about 17.3 million adults in the United States have experienced at least one depressive episode.

New antidepressants are ketamine-like drugs that show a high therapeutic response. A 2014 meta-analysis in Psychopharmacology reports that roughly 0.5 milligrams per kilogram of ketamine effectively reduced depressive symptoms. These effects also lasted 2–3 days after treatment. However, there are some drawbacks.

While currently approved by the Food and Drug Administration (FDA), there are some short-term side effects to consider when using ketamine, such as feeling strange or bizarre, numbness, and difficulties speaking.

There is growing evidence of psilocybin’s antidepressant properties. A study in the Journal of Psychopharmacology demonstrateda single psilocybin dose that produced an antidepressant and anxiolytic response in cancer patients, which lasted for 5 years.

Compared with ketamine, psilocybin has lower addictive properties, which would be beneficial as a potential add-on for current treatments. However, clinical research evaluating this substance in combination therapies is limited.

Recently, researchers at Johns Hopkins University published an article contributing to the research investigating the effectiveness of psilocybin-assisted therapy for depression.

“These data expand the findings of previous studies involving patients with cancer and depression, as well as patients with treatment-resistant depression, by suggesting that psilocybin may be effective in the much larger population of MDD,” write the study authors.

From August 2017 to April 2019, the researchers of the current study recruited adults with MDD who were not taking antidepressant medications and had no history of psychotic disorder, suicide attempts, or hospitalizations. The scientists randomly assigned a total of 24 participants to an immediate or a delayed treatment group.

The psychedelic-assisted therapy lasted for 8 weeks, with 18 in-person visits and 2 days for psilocybin treatment.

Participants in the immediate treatment group began the psilocybin treatment during an 11-hour supportive psychotherapy session. The researchers allowed for a 1.6-week break between the first and second doses. In contrast, the delayed treatment group waited 8 weeks before receiving psilocybin-assisted therapy.

Reduction in severity of depression

At the time of enrollment, participants had a score of 23 in the GRID-Hamilton Depression Rating Scale (GRID-HAMD), which indicates moderate depression. After a 1-week and 1-month follow-up, participants in the immediate treatment group dropped to a score of 8, indicating mild depression.

In the entire cohort, 67% reduced the severity of their depressive symptoms 1 week after psilocybin treatment. This percentage grew to 71% when researchers followed up after 4 weeks.

Limitations from the clinical trial design

Several limitations exist that could challenge the usefulness of the study results. The research had insufficient minority representation, as recruitment leaned towards non-Hispanic whites.

This is important because while white people typically report more cases, the American Psychiatric Association note that Black and Hispanic Americans are more likely to experience depression for more extended periods. In response, the researchers acknowledge the need for future studies to validate this proof of concept in more representative populations.

The study also fails to address the long-term effects of psilocybin treatment. Unlike the investigation on cancer patients, which had a 5-year follow up, the current research followed up after only 1 month.

There were also variables in the study design that could question psilocybin’s effectiveness as an antidepressant drug. One comes from a lack of a placebo group. Placebos are essential in determining whether a person truly benefitted from the drug and not from outside factors. For this reason, the safety of using psilocybin remains unknown.

Overall, the authors find their clinical trial supports the use of psilocybin-assisted therapy for MDD.

“Although the rapid antidepressant effects of psilocybin are similar to those reported with ketamine, the therapeutic effects are different. Ketamine effects typically last for a few days to 2 weeks, whereas the current study showed that clinically significant antidepressant response to psilocybin therapy persisted for at least 4 weeks, with 71% of the participants continuing to show a clinically significant response (≥50% reduction in GRID-HAMD score) at week 4 of follow-up.”