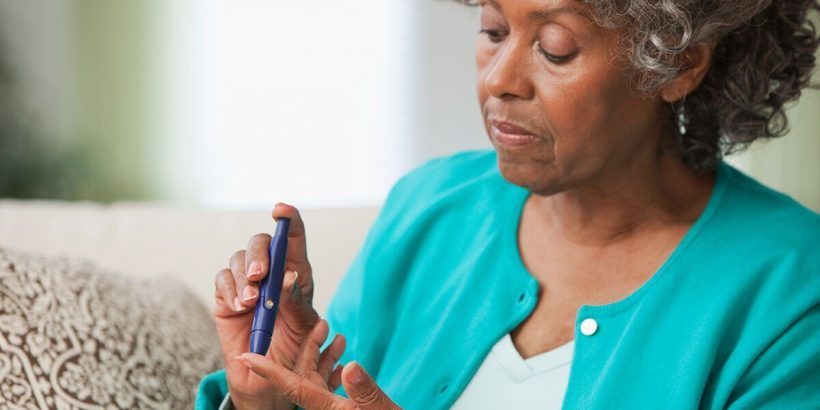 Type 2 diabetes can be a 'devastating diagnosis' says expert

Diabetes is a serious and lifelong medical condition. In both type 1 and type 2 diabetes, the level of sugar – or glucose – in your blood becomes too high. Therefore, it’s vitally important for people with diabetes, or prediabetes, to try to keep their blood sugar levels down.

Patients with diabetes are often advised to eat healthy and well-balanced diets that keep sugar and salt to a minimum.

But a new study has now proved eating fewer carbohydrates can have a positive effect on blood sugar in people with prediabetes and diabetes who aren’t being treated with medications.

Prediabetes refers to having blood sugar levels that are higher than usual but not as high as those with diabetes.

Those with prediabetes are at high risk for diabetes.

As part of the research, by Tulane University in the US, the team compared two groups.

One was put on a low-carb diet and the other stuck to their usual diet.

After six months, the low-carb diet group had greater drops in haemoglobin A1c, a marker for blood sugar levels, when compared with the group who ate their usual diet.

In a university release, lead author and assistant professor of epidemiology – Kirsten Dorans – explained: “The key message is that a low-carbohydrate diet, if maintained, might be a useful approach for preventing and treating type 2 diabetes, though more research is needed.

“We already know that a low-carbohydrate diet is one dietary approach used among people who have type 2 diabetes, but there is not as much evidence on effects of this diet on blood sugar in people with prediabetes.

“Future work could be done to see if this dietary approach may be an alternative approach for type 2 diabetes prevention.”

The study, which was published in the JAMA Network Open journal, involved participants whose blood sugar ranged from prediabetic to diabetic levels and who were not on diabetes medication.

It is also worth noting that fats made up around half of the calories eaten by those in the low-carb group, however, they were mostly healthy monounsaturated and polyunsaturated fats such as those found in foods like olive oil and nuts.

Around five million people in the UK are currently living with diabetes and a further 13 million at risk of the condition.

Type 2 is far more common than type 1, accounting for about 90 percent of cases.

It is not known what causes type 1 diabetes, but the blood sugar spike occurs when the body cannot produce enough of a hormone called insulin, which controls blood glucose.

Whereas the raised blood sugar levels in type 2 diabetes patients are usually caused by being overweight or not exercising enough.

According to Diabetes.co.uk, “normal” blood sugar levels are between 4.0 to 5.4 millimoles per litre (mmol/L) when fasting.

And up to 7.8 mmol/L two hours after eating.

For people with diabetes, blood sugar level targets are four to seven mmol/L before eating.