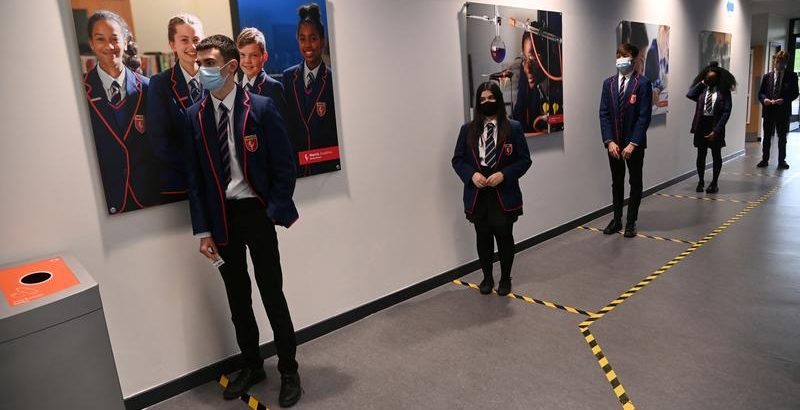 LONDON (Reuters) – Students at Harris Academy in south London are happy to put up with regular COVID-19 testing if it means an end to two months of home schooling and a chance to see friends again.

Schools have been shut for most students during England’s third national lockdown which began on Jan. 5, but are set to reopen on Monday.

“(I’m) looking forward to the interaction with both pupils and staff, and also it’s easier to learn in school,” student Tom Adams, 15, said on Friday, as he returned to school to be tested ahead of reopening next week. “I find it’s harder at home.”

The students will take three tests three to five days apart at the school before moving to home testing, and they can return to school after the first test if it is negative.

The government then plans to provide test kits to use twice weekly at home.

Although the rapid COVID-19 test kits are less reliable than PCR tests, which must be read in a lab, they throw up more false negatives than positives, meaning if someone returns a positive test result, it is likely to be accurate.

“I’m a lot more confident, as I know that people that have tested positive won’t come in, and that will make it a lot more of a safe environment at school and allow school to stay open,” Eddie Taylor, 15, said.

“I don’t think anyone wants to go back to home-school.”

Prime Minister Boris Johnson has said that getting children back to school is a priority as the third lockdown eases, and officials have pointed out the costs of keeping them closed.

“I would say it’s the most important thing for young people to be back in schools and continuing with their education,” Ciara Warnock, principal of Harris Academy in Beckenham, south London, said.

“I think the loss to learning has been quite significant, but also really to support their well-being and their mental health. We know that within school they really thrive.”