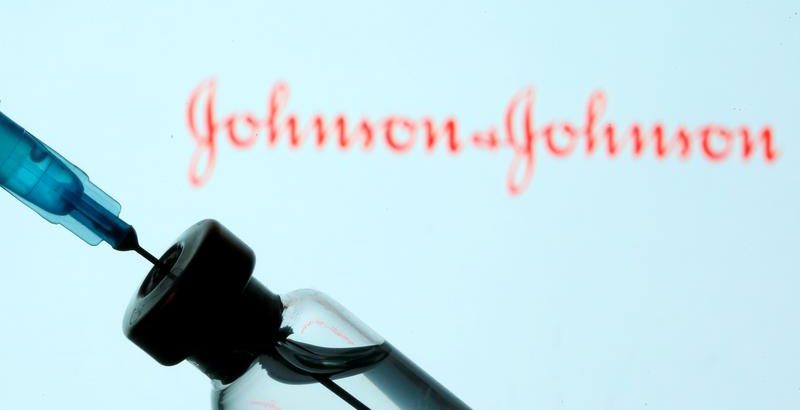 (Reuters) – Johnson & Johnson on Friday said its single-dose vaccine was 72% effective in preventing COVID-19 in the United States but a lower rate of 66% was observed globally in the large trial conducted across three continents and against multiple variants.

FILE PHOTO: A vial and sryinge are seen in front of a displayed Johnson&Johnson logo in this illustration taken January 11, 2021. REUTERS/Dado Ruvic/Illustration/File Photo

In the trial of nearly 44,000 volunteers, the level of protection against moderate and severe COVID-19 was 66% in Latin America and just 57% in South Africa, where a particularly worrying variant of the novel coronavirus is circulating.

Those results compare to the high bar set by two authorized vaccines from Pfizer Inc/BioNTech SE and Moderna Inc, which were around 95% effective in preventing symptomatic illness in pivotal trials when given in two doses. Those trials, however, were conducted mainly in the United States and before the broad spread of new variants now under the spotlight.

J&J’s main study goal was the prevention of moderate to severe COVID-19, and the vaccine was 85% effective in stopping severe disease and preventing hospitalization across all geographies and against multiple variants 28 days after immunization.

That level of prevention “will potentially protect hundreds of millions of people from serious and fatal outcomes of COVID-19,” Dr. Paul Stoffels, J&J’s chief scientific officer, said in a statement.

The company plans to seek emergency use authorization from the U.S. Food and Drug Administration next week.

Public health officials have been counting on the J&J vaccine to increase much-needed supply and simplify the U.S. immunization campaign.

Unlike the Pfizer/BioNTech and Moderna vaccines, J&J’s does not require a second shot weeks after the first or need to be kept frozen, making it a strong candidate for use in parts of the world with weak transportation infrastructure and insufficient cold storage facilities.

Several studies have emerged this month showing that a South African variant of the coronavirus has mutated in areas of the virus that are key targets of vaccines, reducing their efficacy.

“What we are learning is there is different efficacy in different parts of the world,” Stoffels said in a telephone interview.

Importantly, though, in a sub-study of 6,000 volunteers in South Africa, Stoffels said, the J&J vaccine was 89% effective at preventing severe disease. Ninety-five percent of cases in the South Africa portion of the trial were infections with the South African variant.

A mid-stage trial of a Novovax Inc coronavirus vaccine in South Africa also showed lower efficacy in the country. It proved to be 60% effective among volunteers who didn’t have HIV. In a separate, late-stage trial in the UK, the vaccine was 89.3% effective.

In the J&J trial, which was conducted in eight countries, 44% of participants were from the United States, 41% were from Central and South America and 15% were from South Africa. Slightly more than a third of the volunteers were over age 60.

There were no serious adverse events among those who received the shot, the company said. Full results will be published in a peer-reviewed journal.

J&J’s vaccine uses a common cold virus known as adenovirus type 26 to introduce coronavirus proteins into cells in the body and trigger an immune response.

The Pfizer/BioNTech and Moderna vaccines use a new technology called messenger RNA (mRNA) that requires it to be stored in a freezer.

The news of another safe and effective vaccine comes as the United States has surpassed 430,000 COVID-19 deaths and with hospitals in many states still struggling to keep up with patients despite recent declines in new infections.

Concerns about fresh surges in the United States have also grown due to the presence of a more contagious coronavirus variant first discovered in the UK and news of the arrival of the South African variant on Thursday in South Carolina.

The U.S. vaccination program got off to a slow start in December and has accelerated to around 1 million shots per day nationwide.

U.S. President Joe Biden has promised that at least 100 million shots will be administered in his first 100 days in office, but concerns about supply disruptions have added uncertainty to that target.

The United States has an agreement to buy 100 million doses of J&J’s vaccine for $1 billion. The company said in a statement the vaccine would be ready immediately upon emergency approval but Stoffels declined to specify how many doses. The government also has the option of purchasing an additional 200 million doses.

J&J has said it plans to deliver 1 billion doses in 2021 and will produce the vaccine in the United States, Europe, South Africa and India.

U.S. trial results for the vaccine from AstraZeneca Plc and Oxford University are expected in early February, opening up the possibility of a fourth vaccine option. It has already been approved in the UK, Europe and many countries based on results of a separate trial.

Novavax is also discussing with the FDA whether its data is sufficient to apply for emergency use authorization.

J&J is studying the effects of its vaccine given in two doses at two months apart, but results of that trial won’t be available until this summer, Stoffels said.