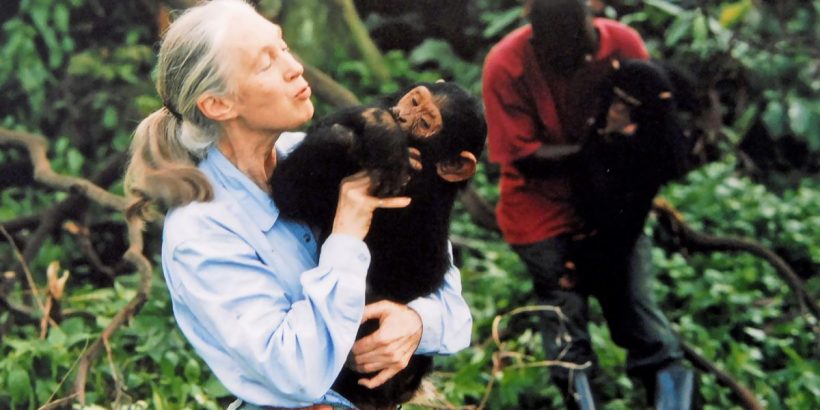 Primatologist Jane Goodall said that humanity must “drastically change our diets” and our treatment of wild and farmed animals if we want to avoid future pandemics after COVID-19 subsides.

“Our disrespect for wild animals and our disrespect for farmed animals has created this situation where disease can spill over to infect human beings,” Goodall said on June 2 in an online event hosted by the campaigning group Compassion in World Farming, The Guardian reported.

“If we do not do things differently, we are finished,” she said. “We can’t go on very much longer like this.”

Goodall pointed to habitat destruction, the farming and consumption of wild animals, illegal wildlife trafficking and factory farming as risky practices that could fuel the next pandemic. These practices have triggered disease outbreaks in the past, according to The Guardian.

Habitat loss, mainly caused by deforestation, drives animals into new environments and leads to both a mingling of diverse animal species and increased interaction with nearby humans, Mongabay reported. “Irrespective of whether humans are going into forest areas or animals are coming to human settlements due to deforestation, viruses are being exchanged,” Rajan Patil, an associate professor of epidemiology at SRM Institute of Science and Technology in Chennai, India told Mongabay.

For example, Patil’s research team found that several Nipah and Hendra virus outbreaks were linked to fruit bats that relocated to human settlements following destruction of their natural habitats, according to a 2018 report in the journal Annals of Tropical Medicine and Public Health.

So-called wet markets, where wild animals may be sold alongside domestic animals and produce, also act as prime sites for disease transmission between animals and people, Goodall wrote in a commentary for Mongabay, published May 4.

Initially, scientists suspected that COVID-19 may have emerged from Wuhan’s Huanan Seafood Wholesale Market in China, as several dozen vendors and customers became infected with the virus following a superspreader event in late December. More recent data suggests that the outbreak did not originate at that market, specifically, but likely began circulating elsewhere and earlier in the year, Live Science reported.

Regardless of where COVID-19 first emerged, wet markets worldwide provide the “perfect environment for viruses to spill over from their animal hosts into humans,” as both animals and humans can be exposed to feces, urine, blood and other bodily fluids from many species in one place, Goodall wrote. “It is clearly of great importance that the ban on trading, eating and breeding of wild animals for food should be permanent and enforced,” but to do so sustainably also requires that new sources of income be established for those who stake their livelihoods on the trade, she added.

Importantly, “it is not only in China that wildlife markets have provided the ideal conditions for viruses and other pathogens to cross the species barrier,” she wrote. Many wet markets exist in Asian countries beyond China, Goodall wrote, and wet markets also appear in Africa and Latin America, Vox reported. More broadly, the sale of bushmeat, meaning meat from wild animals, poses risks beyond the context of wet markets and likely spurred outbreaks of HIV-AIDS in Africa, for example, she wrote.

Animals at wet markets may also be illicitly sold as pets, for their fur or for use in traditional medicines, she added. “The use of some wild animal products for traditional medicine is thus far still legal in China (though rhino horn and tiger bones are banned),” Goodall wrote. The practice of farming brown bears and sun bears for their bile also remains legal and could contribute to disease spread, she said.

Bears farmed for bile are often kept in small cages, exposed to a variety of pathogens and contaminants due to poor hygiene standards, and given large doses of antibiotics that can give rise to drug-resistant superbugs, Goodall wrote. The same standards of care can be seen in intensive industrial farming, otherwise known as factory farming.

“The diseases commonly known as ‘bird flu’ and ‘swine flu’ resulted from handling poultry and pigs,” and the coronavirus that causes Middle East respiratory syndrome (MERS) may have emerged from infected domestic dromedary camels, she wrote.

During the Compassion in World Farming event, the European Union (EU) commissioner for health and food safety Stella Kyriakides noted that the EU aims to curb the dangers of factory farming through new agriculture and biodiversity strategies and the European Green Deal. These initiatives focus on reducing pesticide use and supporting sustainable farming and breeding practices, while ensuring that food remains affordable, The Guardian reported.

“One of the lessons learnt from this crisis is that we must change our ways,” Goodall said during the event. “Scientists warn that to avoid future crises, we must drastically change our diets and move to plant-rich foods. For the sake of the animals, planet and the health of our children.”