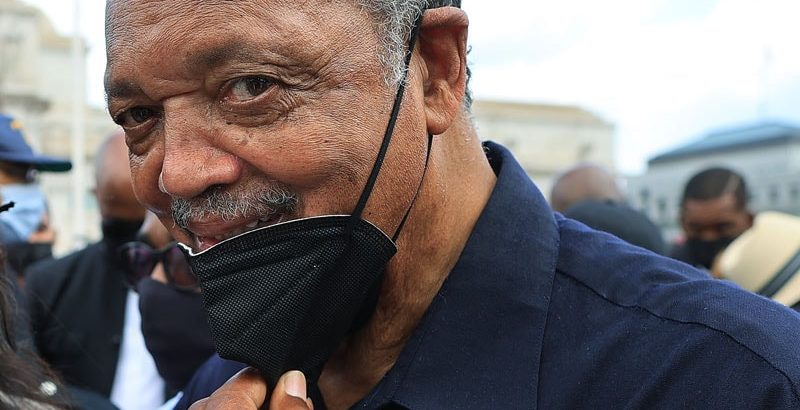 CHICAGO (AP) — The Rev. Jesse Jackson was released Wednesday from a Chicago facility a month after he was hospitalized for a breakthrough COVID-19 infection and intensive physical therapy for Parkinson’s disease.

The civil rights leader and his wife, Jacqueline, were first hospitalized at Northwestern Memorial Hospital last month. Jesse Jackson, 79, was vaccinated for COVID-19, but his 77-year-old wife was not. She required oxygen and a brief intensive care unit stay before she was released this month.

The reverend’s case was less severe, and about a week after he was first hospitalized for COVID-19 treatment, he was transferred to a physical therapy hospital. He briefly spoke to reporters Wednesday, accompanied by doctors and therapists who worked with him at the Shirley Ryan AbilityLab.

Jackson said he did not have any shortness of breath or respiratory issues, but it did affect his Parkinson’s and his ability to walk and talk.

“The shot protected me from death,” he said of the vaccine.

Doctors and other medical staff described a regimen of about 60 to 90 minutes of daily physical therapy, along with occupational and speech therapy, saying the civil rights leader who has remained active since disclosing his Parkinson’s diagnosis in 2017 was full of energy and upbeat during his treatment.

Before he left the hospital for home, he playfully confirmed with the medical team: “So I can march again?”

Despite his illness and gallbladder surgery this year, Jackson has remained active and continued traveling in his advocacy for voting rights and other causes.

He has encouraged COVID-19 vaccinations, particularly for Black people, and got his first shot publicly at an event in January. However, he told The Associated Press last month that his wife of nearly 60 years wasn’t vaccinated because she had an undisclosed “pre-existing condition” that worried family members. Generally, public health experts strongly encourage people with existing health conditions, such as cancer or diabetes, to get vaccinated as they are at increased risk for severe illness.

Since her release from the hospital, though, Jacqueline Jackson has become a “true advocate for everyone” to get vaccinated, according to son Jonathan Jackson.

“We know it is a miracle that both of our parents are now COVID-19 survivors, and we thank God for his healing,” Jonathan Jackson said in a Wednesday statement. “We also pray for the millions of people who have been infected with this virus and pray they too will also overcome.”