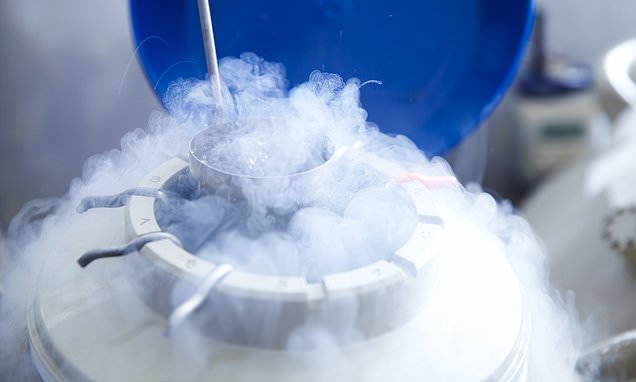 IVF success rates could be doubled by transferring frozen embryos to the womb a day earlier, research suggests.

Currently, medics tend to transfer a thawed embryo into the woman seven days after she goes through ovulation.

At this point, the womb lining is at its thickest, ready for a fertilised egg – or an IVF embryo – to attach and start growing.

But a study of hundreds of IVF procedures revealed women who had the transfer six days after ovulation were more likely to get pregnant.

Forty-five per cent of women who had a frozen embryo transferred a day earlier than standard went on to have a pregnancy beyond 24 weeks.

In comparison, the rate was just 29.1 per cent for women who had it on the seventh day, according to the researchers at the Oxford Fertility clinic. 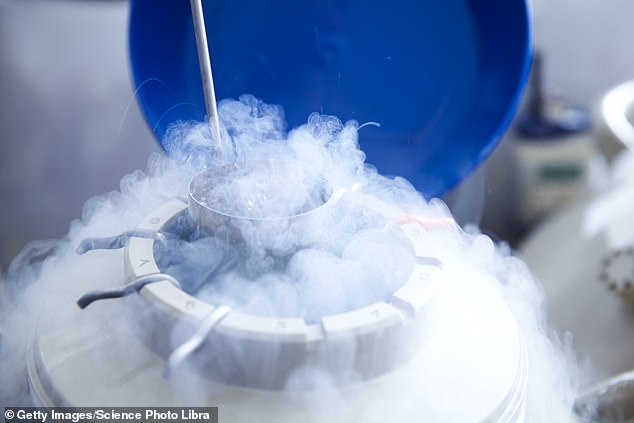 The success rate of IVF ‘almost doubles’ when a frozen embryo is transferred to the womb just one day before the standard procedure, a study suggests. (Stock, frozen eggs and embryos)

Debate around the best time to transfer a frozen embryo into the womb is ongoing, and this is the latest study to analyse birth rates.

It compared the success of transfer on day six and seven, after there had been a dramatic rise in levels of luteinizing hormone (LH).

LH triggers ovulation, which is the release of the egg from the ovary, and a build-up of the womb lining, preparing the body for pregnancy.

An embryo, an egg fertilised by a sperm in a petri dish, is transferred to the womb two to five days after being made during IVF.

For thousands of women, good quality embryos are left over. These can be frozen and thawed for use in the future.

Frozen embryos can be thawed and transferred in a natural menstrual cycle, or in a hormono-regulated one. Both treatments are equally effective, the NHS says.

The natural cycle option avoids medication, which can have side effects, and relies on predicting the women’s natural hormones.

The women’s cycle is monitored for around four weeks.

Medics look for a surge in the luteinizing hormone (LH) in urine and the blood.

For the purpose of frozen embryo transfer, medics define the day of the LH surge as ‘day one’.

LH triggers ovulation, which is the release of an egg from the ovary into the fallopian tube. Ovulation happens around 10 hours after LH increases and typically happens about 13–15 days before the start of each period.

The womb lining also begins to thicken at this point, preparing for a potentially fertilised egg.

A few days after the LH surge, the womb is prime for an egg – or IVF embryo – to attach.

Data from 561 frozen embryo transfers were involved in the study, which will be presented at the Fertility 2020 conference in Edinburgh.

The success rates stayed true even when the experts took into account the women’s ages and other factors that may affect their pregnancy chances.

The miscarriage rate – how many women got pregnant but then lost the baby – was the same in both groups.

The research, led by Professor Tim Child, medical director at Oxford Fertility, adds to evidence that the day of transfer is important.

Dr Jane Stewart, chairwoman of the British Fertility Society, said the findings were not strong enough to implicate how clinics pick the day of embryo transfer. It varies between each clinic and IVF patient.

Dr Stewart said: ‘This research seeks to answer an important question about the timing of embryo transfer when using frozen embryos.

‘At present, it doesn’t justify a change in clinical practice. It does add an important element to the body of knowledge on this issue.’

The study only looked at women who had their thawed embryos transferred during their natural cycle, as opposed to a hormono-regulated cycle.

In a hormono-regulated cycle, the woman’s ovaries and her hormones are effectively ‘switched off’.

She is then medicated with synthetic hormones to prepare the lining of the womb so the embryo can attach.

The natural cycle option avoids medication, which can have side effects, and relies on predicting the women’s natural hormones.

Medics monitor the woman’s hormones so they can implant the embryo at the right time when the womb lining is thick enough.

Both treatments are equally effective, the NHS says, but come with their disadvantages.

One disadvantage to the natural cycle option is that the timing of ovulation is outside anyone’s control.

The ideal day for embryo transfer may fall on a day when the IVF clinic is not open or able to provide treatment.

Professor Child said the findings also show how successful IVF is using the natural cycle method as opposed to the drug-regulated method.

He said: ‘This research not only reveals the best time for implantation in a natural cycle, when the body is most ready to receive an embryo.

‘But [it] also demonstrates how we can achieve very good pregnancy rates with a natural, drug-free treatment.

‘You don’t need to be subjecting women to medications, hormones and pessaries.’

Professor Child added that there was an ‘assumption’ by some clinicians and patients that medications are needed for a frozen embryo transfer.

‘We’ve shown that that’s not the case,’ he said.

HOW DOES IVF WORK?

In-vitro fertilisation, known as IVF, is a medical procedure in which a woman has an already-fertilised egg inserted into her womb to become pregnant.

It is used when couples are unable to conceive naturally, and a sperm and egg are removed from their bodies and combined in a laboratory before the embryo is inserted into the woman.

Once the embryo is in the womb, the pregnancy should continue as normal.

The procedure can be done using eggs and sperm from a couple or those from donors.

Guidelines from the National Institute for Health and Care Excellence (NICE) recommends that IVF should be offered on the NHS to women under 43 who have been trying to conceive through regular unprotected sex for two years.

People can also pay for IVF privately, which costs an average of £3,348 for a single cycle, according to figures published in January 2018, and there is no guarantee of success.

The NHS says success rates for women under 35 are about 29 per cent, with the chance of a successful cycle reducing as they age.

Around eight million babies are thought to have been born due to IVF since the first ever case, British woman Louise Brown, was born in 1978.

The success rate of IVF depends on the age of the woman undergoing treatment, as well as the cause of the infertility (if it’s known).

Younger women are more likely to have a successful pregnancy.

IVF isn’t usually recommended for women over the age of 42 because the chances of a successful pregnancy are thought to be too low.

Between 2014 and 2016 the percentage of IVF treatments that resulted in a live birth was: