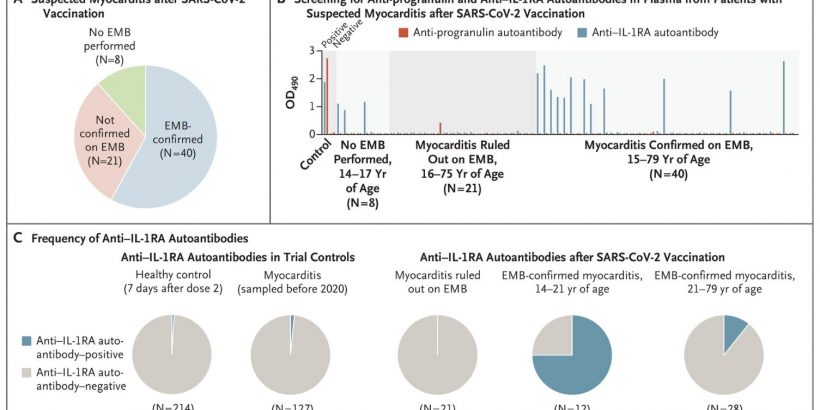 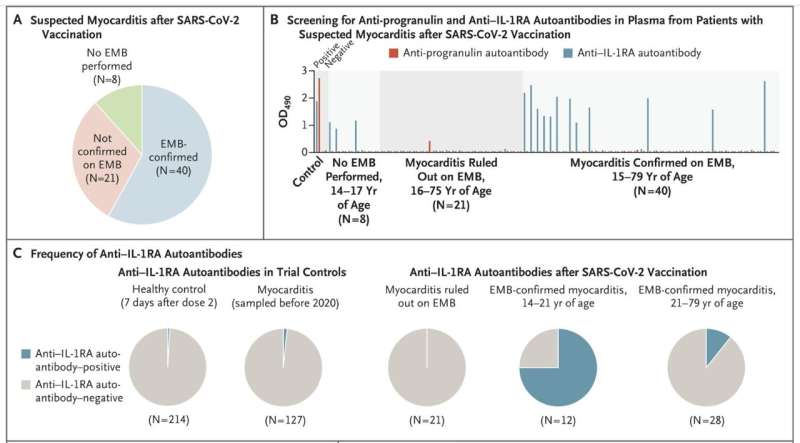 Myocarditis as a very rare side effect of mRNA vaccination against SARS-CoV-2 particularly in male adolescents and young men was described just recently in an Israelian study. It usually occurs in a close temporal context after mRNA vaccination and often shows a milder course compared with classical viral and noninfectious myocarditis.

In the current study, blood samples from male and female patients (age 14 to 79 years) were analyzed, most of whom also had a myocardial biopsy. In particular, in male adolescents and young men with histologically confirmed myocarditis, autoantibodies against a key endogenous anti-inflammatory agent called interleukin-1 receptor antagonist were detected.

Interleukin-1 (IL-1) is an important signaling molecule involved in alerting and mobilizing the immune system during infections. However, in case of prolonged or high IL-1 release, inflammatory responses can get out of control.

“Especially with regard to inflammations of the pericardium, myocardium, and vessels, we already know about the central importance of IL-1. However, our immune system can normally cool down inflammatory responses by itself, and especially highly potent signaling molecules such as IL-1 have natural counterparts that can, if necessary, slow down excessive inflammatory reactions,” explains the immunologist Christoph Kessel, Ph.D., who heads the Translational Inflammation Research Center of the Department of Pediatric Rheumatology and Immunology at Münster University Hospital (UKM).

The interleukin-1 receptor antagonist (IL-1-Ra) is one such natural antagonist that can block the docking site for IL-1 on the cell surface and thus shuts down the signaling pathway.

“However, in patients with myocarditis, we found an atypical form of IL-1-Ra, which carries a specific chemical modification in form of an additional phosphorylation. The immune system then interprets this as an unknown, potentially harmful structure and thus starts to produce antibodies against it. These then deplete and neutralize IL-1Ra as a major inhibitor of inflammation and can thus pave the way for unrestricted IL-1 signaling,” says Dr. Lorenz Thurner, MD, head of a research group at the José Carreras Center of the Clinic for Internal Medicine I of Saarland University Hospital (UKS) in Homburg, which focuses on misdirected immune reactions in cancer or autoimmune diseases.

“Initial observations in the very rare cases of myocarditis following SARS-CoV-2 vaccination occured out of coincidence and in association with our previous studies identifying such autoantibodies in both MIS-C and severe and critical courses of COVID-19,” Thurner continues.

“In any case, it must be stressed in this context that vaccinations against SARS-CoV-2 are save and have prevented countless severe courses of disease and saved millions of lives. We are firmly convinced that the benefit of mRNA vaccinations with the resulting protection against severe SARS-CoV-2 infections and serious complications far outweighs the risk of mild myocarditis, which can be caused by the overall very rare IL-1Ra autoantibodies we have described,” says Karin Klingel, MD, Head of Cardiopathology and Infectious Diseases Pathology at the University Hospital Tübingen.

“Collectively, this research project could only be achieved through a highly interdisciplinary team effort, that made participation in the project both so exciting and successful,” says Jochen Pfeifer, MD, of the Pediatric Cardiology Department at Saarland University Hospital (UKS).

Taken together, the present study is of particular importance as it contributes to a better understanding of the potential underlying mechanisms in a very rare concomitant of SARS-CoV-2 mRNA vaccination. However, despite this substantial gain in knowledge, many questions remain yet unanswered and the team is currently working on addressing those.