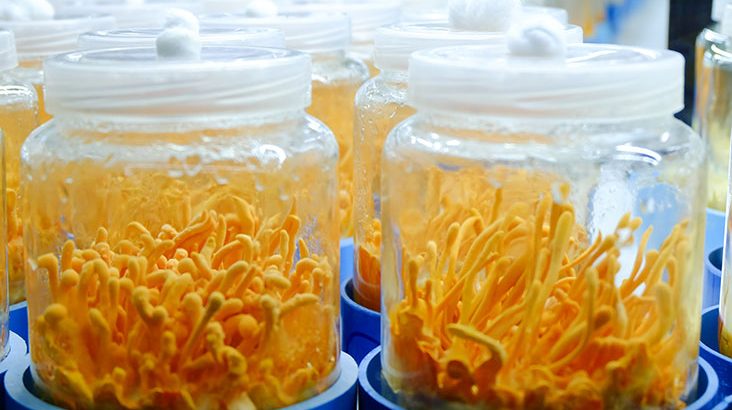 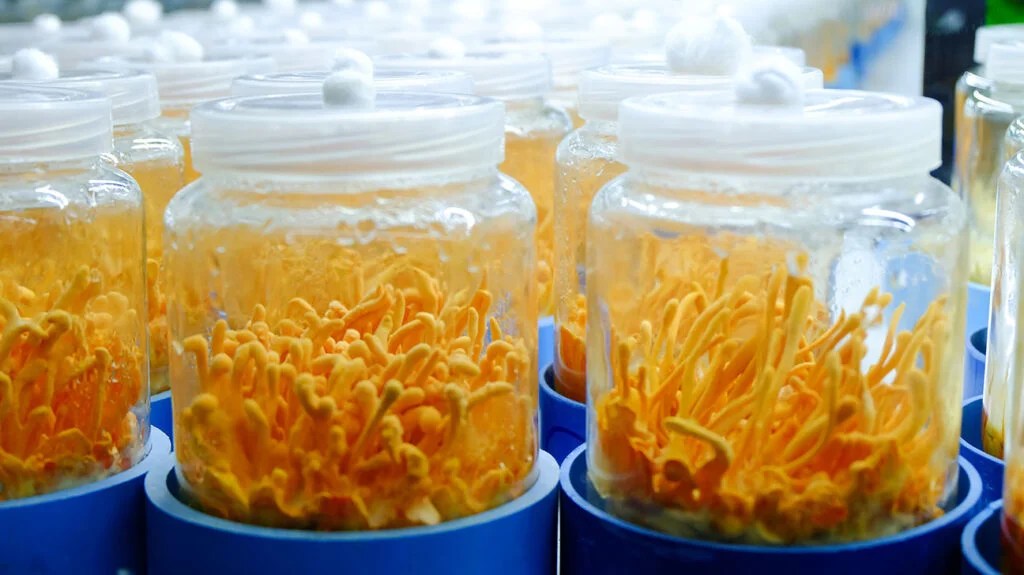 Cordycepin is a key compound of the mushrooms and has been linked to potential anticancer effects.

Cordyceps mushrooms are typically collected in the wild and are difficult to find in large quantities. When grown in lab conditions, they are typically grown off of grains.

In the wild, insects are a direct source of nutrients for cordyceps. In a recent study, researchers observed cordyceps growth on six different insects.

They found that although cordyceps grew largest on mealworms and silkworm pupae, they produced the highest levels of cordycepin on rhinoceros beetles.

“The cultivation method of Cordyceps suggested in this study will enable the production of cordycepin more effectively and economically,” lead author Mi Kyeong Lee, Ph.D., of the College of Pharmacy at Chungbuk National University, South Korea, said in a news release.

“However, securing edible insects is not yet sufficient for scale-up to an industrial level. It is also thought that more efficient production may be possible through the use of other insects, which needs to be demonstrated by further study.”

The study was published inFrontiers in Microbiology.

For the study, the researchers observed cordyceps growth on six insects:

While cordyceps grew on all six insects, the growth and shape of the resulting mushrooms differed among them.

After 35 days of growth, the researchers noted that mushrooms grew largest on silkworm pupae and mealworms, followed by Japanese rhinoceros beetle and crickets, and lastly, white-spotted chafer larvae and grasshoppers.

However, they noted that cordyceps size did not necessarily correlate with cordycepin content.

Cordycepin content was highest among cordyceps grown on Japanese rhinoceros beetles. Mushrooms grown on these beetles had 34 times more cordycepin than those from silkworm pupae.

They then investigated whether certain kinds of fats may influence growth. In doing so, they noted that a higher oleic acid content was linked to more cordycepin output.

Next, the researchers conducted experiments on oleic acid in gene expression linked to cordycepin production.

They found that genes linked to cordycepin biosynthesis were highest in mushrooms grown with oleic acid.

Consistent with increased levels of cordycepin-related genes, they also found that oleic acid treatment increased cordycepin content by 51.4% compared to mushrooms grown without this fatty acid.

Some studies have shown that cordyceps can increase antioxidant levels in older mice and may have anti-aging effects. Another study noted that cordyceps might extend the lives of fruit flies.

Studies of human cells and mice have found that the mushroom may also inhibit cancer tumor growth and have applications in conditions including lung cancer, skin cancer, and colon cancer.

While promising, most research into cordyceps has been conducted in cell or animal models and further study is needed to confirm whether the results may translate to humans.

“Cordyceps is a unique type of mushroom,” Shiuan Chen, Ph.D., chair of the Department of Cancer Biology and Molecular Medicine at California-based cancer research center, City of Hope, not involved in the study, told MNT:

“The therapeutic potential of these mushrooms has not been definitively demonstrated through an FDA-approved clinical trial. Increased production of cordyceps may offer the possibility to evaluate them in a clinical trial, which would require a good amount of this type of mushroom.”

Dr. Chen noted that while cordycepin may be useful in humans, human trials must be conducted for conclusions to be made.

When asked about the findings’ limitations, Dr. Chen said:

“The authors reported a positive correlation between oleic acid content and cordycepin production. What is needed would be a functional assay to demonstrate the correlation of the content of the chemicals and the biological activity in vitro or in vivo.”

“It is fine if the purpose of the paper is just to report an increase in cordyceps mushroom production in mealworms. It is premature to suggest the utility in medical use,” he added.

“This could be an important technical advance in harvesting biochemicals from these fungi. The finding that growing the fungi on different substances ranging from grains to insects suggests that it may be possible to enrich some types of chemical compounds preferentially for large-scale production. This story reminds me of penicillin, where its antimicrobial effect was discovered in the late 1920s, but it was not till the 1940s that sufficient amounts could be made for clinical testing.”

Cornelia De Moor, Ph.D., associate professor in RNA biology at Nottingham University, not involved in the study, remained more cautious about the findings.

“I’m not sure this is a groundbreaking study. Growing cordyceps on insects will make it much more expensive. Extracts of cordyceps grown on cereals can easily reach these levels of cordycepin,” Dr. De Moor said.

“It would only be worth it if other health-promoting compounds were produced at higher levels, and proof of that is lacking. It would be more important if the finding that fatty acids can influence cordycepin production were proven to translate to culture on a cheaper substrate.”