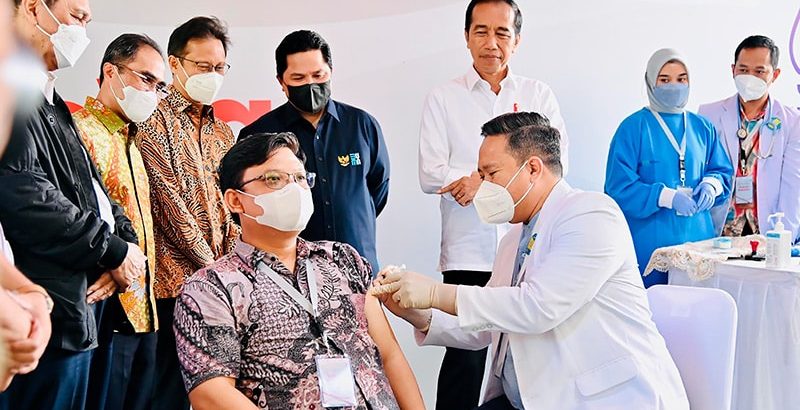 President Joko Widodo announced the vaccine brand, IndoVac, as a new milestone of Indonesia’s pharmaceutical industry that will manufacture primary series vaccines, booster vaccines and vaccines for children, which have been in development since November 2021.

“From now on, we can produce our own COVID-19 vaccine,” Widodo said in an unveiling ceremony in West Java’s Bandung city. “And so we have independence in vaccine matters.”

During the ceremony, 15 residents who had not received any COVID-19 vaccine got their first IndoVac jabs.

Indonesia’s Food and Drug Authority greenlighted emergency use authorization of IndoVac in September, with an efficacy above 80% after two shots. The vaccine passed an audit by the country’s highest Islamic body that the shot is fit for consumption by Muslims — a particularly important factor in the world’s most populous Muslim nation.

IndoVac, made by inserting the genetic code for the antigen into yeast cells, is developed by state-owned pharmaceutical company Bio Farma in collaboration with U.S.-based Baylor College of Medicine, a private, independent health sciences center in Houston, Texas.

Widodo said Bio Farma plans to produce 20 million doses of primary series vaccine this year and 40 million doses next year as the company expands its facilities. In 2024, production may further increase to 120 million doses per year, depending on demand and the market.

As of Thursday, 73% of Indonesia’s 234.6 million people eligible for shots were fully two-dose vaccinated, and about 27% had a first booster dose while just 0.3% had a second booster.

Indonesia had largely recovered from its delta surge, which was among the worst in Southeast Asia. Last July, a then-record of about 56,700 daily new cases saw the delta variant overwhelming hospitals on the main island of Java. In February, omicron set a new high of over 63,900 new infections.

Though cases dropped steeply at the end of March and into April, they have recently been rising again with around 1,800 cases a day in the past week.

Overall, Indonesia has reported more than 6.4 million infections and 158,263 deaths from COVID-19. The actual numbers are widely believed to be higher.