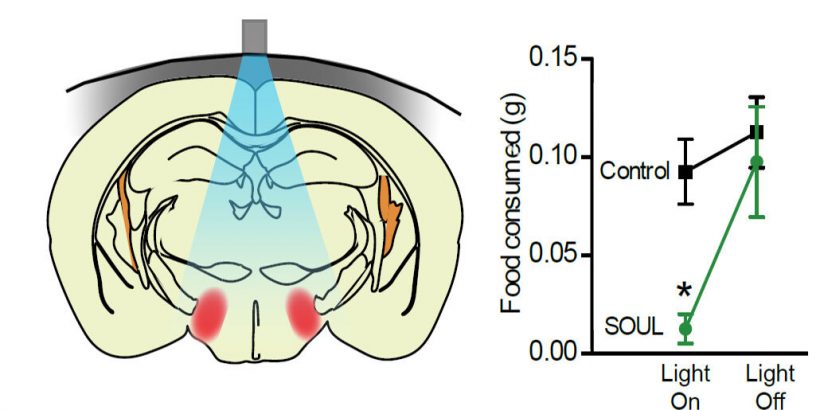 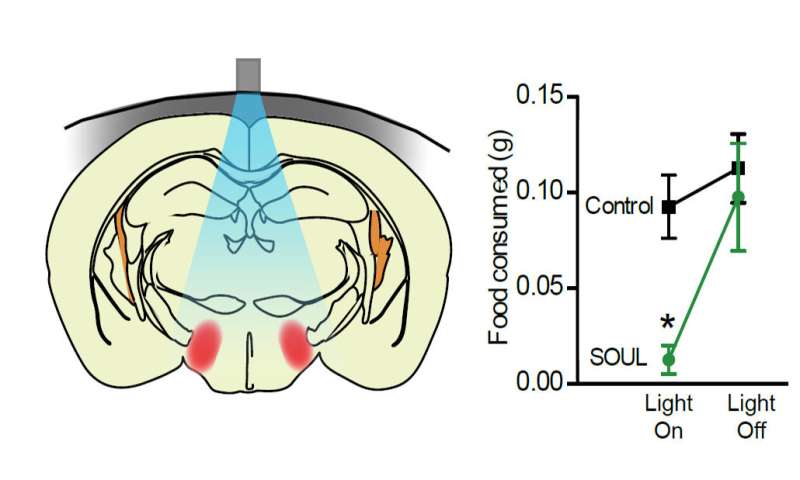 A minimally invasive optogenetic technique that does not require brain implants successfully manipulated the activity of neurons in mice and monkeys, researchers report April 29th in the journal Neuron. The researchers first genetically engineered neurons to produce a newly developed, extremely light-sensitive protein called SOUL. They then demonstrated that it is possible to shine light through the skull to alter neuronal responses throughout the entire mouse brain, and through a thick membrane called the dura to reach superficial regions of the macaque brain.

“This new tool will allow neuroscientists to apply optogenetics in animal experiments while ensuring that the brains being studied are minimally damaged during the experiments,” says co-senior study author Guoping Feng of the Massachusetts Institute of Technology (MIT). “In particular, monkey models are critical for our understanding of high cognitive function and its dysfunction in brain disorders such as schizophrenia and Alzheimer’s disease, and for developing treatments for these devastating brain disorders.”

Optogenetics is a method that involves using light to activate or deactivate neurons that are genetically modified to produce light-responsive proteins called opsins. This approach has allowed neuroscientists to examine the causal role of different types of neurons in a variety of behavioral and cognitive processes. But one major drawback is that this technique typically requires the implantation of optical fibers, which can cause brain damage and inflammation and increase the risk of infection.

“Prior to our study, a few studies have contributed in various ways to the development of optogenetic stimulation methods that would be minimally invasive to the brain,” says co-senior study author Robert Desimone of MIT. “However, all of these studies had various limitations in the extent of brain regions they could activate. One major novelty of our study is that it is the first to demonstrate a method to activate any mouse brain region independent of its location with light from outside the skull.”

In the new study, the researchers used the light-sensitive protein SOUL to manipulate the activity of neurons in the lateral hypothalamus—one of the deepest regions of the mouse brain. They did so by shining light through an optical fiber positioned above the intact skull. To confirm that the approach was working, they also monitored neuronal responses in that brain region using electrophysiological recordings.

The delivery of blue light stimulated the neurons and disrupted feeding behavior, which is controlled by the lateral hypothalamus. In addition, orange light deactivated the neurons and restored normal food consumption. Further analysis confirmed that this approach did not cause brain inflammation or injury.

The researchers had to modify their technique in macaques, which have much thicker skulls than mice. They delivered light through an optical fiber placed outside the dura—a thick membrane made of dense tissue that surrounds the brain. These experiments showed that SOUL can be used in monkeys to alter neuronal responses in cortex—the outer layer of neural tissue in the brain. According to the authors, no prior study had demonstrated an optogenetic method with such minimal invasiveness in macaques.

Surprisingly, the technique was able to induce and disrupt local field potential oscillations—rhythmic, synchronized electrical activity of neurons. Until now, it has been very difficult to manipulate oscillations to study their causal role in brain functions.

“These oscillations are believed to be very important for many functions of the brain, including memory, attention, sleep, and decision-making,” says co-first author Diego Mendoza-Halliday of MIT. “It was exciting to discover that our new opsin can be used as a method to turn on and off these brain waves at will, since it will allow us to better study the role of these waves in multiple brain functions.”

Moving forward, SOUL-based optogenetics opens many new avenues of research. For example, this approach could shed light on early brain development, which is especially susceptible to severe tissue damage caused by long-term optical fiber implants. Due to its superior light sensitivity, SOUL can be used to control neuronal responses in larger-scale neural circuits involved in various brain functions. Moreover, SOUL remains active for more than 30 minutes, allowing scientists to study longer-term behaviors of freely moving animals that are not restricted by optical fibers.

For their own part, the researchers will work on improving the sensitivity of SOUL so they could manipulate neuronal activity through the thick skulls of large animals to reach deeper brain regions. In addition to revealing the causes of neurological and psychiatric disorders in animals, this approach could one day be used for the treatment of these disorders in humans.