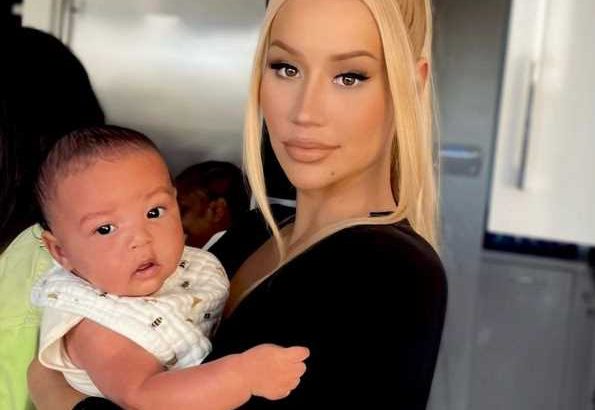 Iggy Azalea’s son is ready for his closeup!

Four months after revealing that she had welcomed her first child, a son named Onyx, the 30-year-old rapper gave her fans their first glimpse at her bundle of joy.

In one photo shared on Instagram over the weekend, Azalea balances her baby boy on her hip while posing in a form-fitting black dress with a matching corset.  Another image shows Azalea cradling Onyx in her arms while they both shoot the camera a fierce look.

Fittingly, the new mom simply captioned the sweet images with an angel emoji. Over the weekend, Azalea also announced that she had split from fellow rapper Playboi Carti.

Azalea hinted at the breakup in a pair of cryptic messages shared on her Instagram Story Friday. “You lost a real 1,” she wrote in one message, according to The Shade Room, adding in another, “People take loyalty for granted & that’s why I’d rather be alone.”

She later clarified her previous messages, writing, “What I meant last night was that I’m raising my son alone & I’m not in a relationship.” Azalea and Carti met in 2018 while she was touring overseas and started dating shortly after.

Three months after they confirmed their romance, the musicians decided to move in together, with Carti, 24, confirming the big step in their relationship in a summer 2019 cover interview with Fader.

"Once I started talking to her, I just cut off everybody. It was over with," he shared with the outlet, explaining how he and Azalea had moved to Atlanta from Los Angeles together. "I support everything she does."

Things seemed to heat up that July for the couple when the "Fancy" rapper stepped out flaunting a massive diamond ring on her left hand. Fans instantly started speculating that the pair were engaged, though the pair never addressed it themselves.

Azalea first announced the birth of her child in June.

"I have a son,” she wrote in a message on her Instagram Stories at the time. "I kept waiting for the right time to say something, but it feels like the more time passes, the more I realize I'm always going to feel anxious to share news that giant with the world.”

The star then shared that she wishes to "keep his life private but wanted to make it clear he is not a secret.”

"I love him beyond words," she added. A month after sharing the happy news, she revealed her son’s name in a sweet audio recording of herself talking to her little one.

"Baby boy, are you going to say something to me?" Azalea — born Amethyst Amelia Kelly — asks her child in the recording as the baby coos.

When a fan remarked how their gemstone-themed names "go so well together" in the comments section, the rapper replied, "We besties forever."