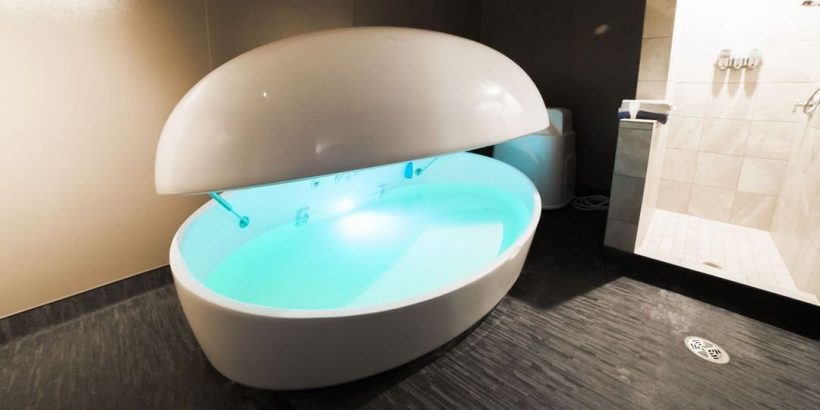 My ears tingled as I leaned my head back into the water. I was in a giant man-made egg filled with salty liquid, with only artificial purple light and quiet surrounding me. The woman who gave my orientation recommended that everyone spend “their first float in silence”—so I figured I’d follow directions. Closing my eyes, I relaxed, letting my body succumb to its watery fate.

This was the beginning of my experience trying out sensory deprivation therapy, otherwise known as float therapy.

Before I ended up in that purple-hued pod (I was at Float Seattle!), I had stumbled across an article about this whole concept online that talked about how the admittedly strange-sounding activity could be a great tool for sports recovery. And being an avid runner, I was immediately intrigued and wanted to learn more.

Float therapy involves floating (duh) in lukewarm water meant to match your body temp mixed with magnesium sulfate (aka Epsom salt). The idea behind is it that it (allegedly) helps your body enter a deep state of relaxation, so your brain can enter a place of rest and repair. The magnesium sulfate is useful for joint repair and is anti-inflammatory, and floating in it allows the stuff to enter the body through the skin and, in turn, help your muscles relax—similar to how you would in a homemade Epsom salt bath. As someone who is often sore from working out and could probably benefit from a recovery soak, I thought, wow, sounds nice.

Medical professionals are researching float therapy from all sorts of angles. Research suggests that float therapy can be a good stress outlet for folks teetering on the edge of burnout, and even help ease symptoms of anxiety and depression. Float therapy may even help people with chronic-pain conditions, like arthritis, separate studies suggest. (More research needs to be done to solidify these findings and explain why these potential benefits are possible, but it’s safe to try for most people—proven benefits or not!)

One of the people at the forefront of this research is Justin Feinstein, PhD, clinical neuropsychologist and director of the Float Clinic and Research Center at the Laureate Institute for Brain Research. He studies the effects of float therapy in people with moderate to severe anxiety. Float therapy is “a unique way to help people access states of mindfulness,” Feinstein explains. “It puts the nervous system in a reset”—and in turn, can improve your mental health in the short term.

The way that people can experience this is through the careful arranging of everything in the float therapy environment. The goal is to minimize every outside sensation, so that the person experiencing float therapy is only left focusing on what they are feeling (their heartbeat, breathing, being alive, etc). That’s why the room is as silent and dark as possible, and why the water and air temperatures match that of the skin. Feinstein also found that people’s health markers can even change when they are in a float. “We found that blood pressure goes down 10 to 15 points during the float,” he says.

He also agrees that float therapy can also be a great recovery tool for athletes. Athletes are also filled with anxiety and stress, and float therapy “can help [athletes] get back down to baseline,” he adds.Epsom salt does offer those anti-inflammatory benefits, but the main way that float therapy helps is by altering the effect of gravity. In other words, you don’t need to put any effort into floating, and without having to work against gravity, the muscles are able to recover easier, Feinstein explains.

Something especially cool: Apparently the full relaxation effect of float therapy does not even set in until an hour after the float—and your state of relaxation could even last for a full 24 hours afterward. This is why, in addition to being a great recovery tool, Feinstein says he recommends float therapy as a short-term solution for people with anxiety or depression.

But, because I tend to be skeptical about almost everything, I figured I should try it out for myself.

A quick internet search revealed there was a studio that offered float therapy only 15 minutes away from me. Given that I was primarily interested in the potential muscle recovery benefits, I went on an intense tempo run the day before to make sure I was really putting float therapy to the test.

As predicted, I walked into Float Seattle feeling the kind of soreness that likes to say hi after every stair you climb up. But I was feeling immediately more at ease when I got inside the waiting area. Rather than the clinical environment of a doctor’s office waiting room, the lobby reminded me of the lounge at a high-end spa: squishy couches positioned in front of framed photos of abstract art, ginger tea brewing at a station in the corner, and nature sounds wafting throughout the space.

Upon my arrival, I had to complete a quick orientation. A woman who worked there walked me over to the pod where I would have my float. She explained how the water had tons of Epsom salt mixed in, how to open and close the top, how to position my body when floating, and what I needed to do before getting in the water. She also let me know that music would play when it was time for my session to end—then left the room.

Like at most pools, I was required to shower before getting in the water. At the location I went to, there was a shower right in front of the pod. Shampoo and conditioner and body wash were all provided. The woman recommended cleansing in lukewarm water towards the end of your shower to prepare yourself for the water in the pod being a little cooler than your usual shower temp.

After my rinse, I got in the pod and closed the top over my head using a handle inside. At first, all I could think about was how…not spa-like it felt. I knew that the water wouldn’t be super hot, but I was expecting an experience a little bit like being in a hot tub. But in the pod, it almost felt like I was in a womb. (I mean, I was naked inside an egg with water.) I also found myself wondering how much of the hour I had left.

But eventually I stopped counting the minutes. I slowly started to feel less self-conscious and aware of the fact that I was exposed and trapped in the small space. (FWIW, you can wear a swimsuit if you want, but I opted not to in order to enhance the experience.) I stopped thinking about how the fluid kept drifting in my ears, or how to position my body in the least-weird way. I turned off the light. I closed my eyes. All of my thoughts seemed to sink to the bottom of the pod.

Once I mentally let go of anxiousness and insecurity about the experience, it felt like the music chimed only minutes later. But when I put my watch back on, I realized I had actually been in the pod for over an hour.

After my session, I also felt totally ready to take on another tough run—and my mind felt calm.

Every muscle in my body felt relaxed during and after my soak. I’d compare it to how you might feel after, say, a three-hour (!) massage. When the employee at the front desk asked how I liked the experience, all I could do was nod with a daydreamy expression and sip at my cup of ginger tea.

It’s hard to remember another time I truly just let myself literally lay back and think about nothing. Even when I’ve tried meditating, I’ve usually just spent the time stressing about how I was stressing. Beyond physically repairing my body, I felt amazed at how mentally calm and clear the experience made me. Hey, maybe it was just placebo—but I felt good.

Want to try float therapy yourself? It’s totally safe for most people.

You can even try float therapy if you’re pregnant. The only people I would say should use caution are those with claustrophobia. However, because you lift the top of the pod at any time, you might be fine after you get used to the atmosphere.In addition, Feinstein says that he’s never actually tested on anyone using a closed pod because people with severe anxiety generally don’t want to try it if they are enclosed in a space.

Instead, he has simply made sure the room had the same effects that the enclosed pod would (sound-proofing the space, removing light, etc.). So you might even be able to find somewhere that provides the experience without being put in a small space. You can also talk to your doctor or therapist first if you’re at all unsure about whether float therapy is a good fit for you.

The only issues I had with float therapy were the price and the amount of time it took. While there are constantly offers to take advantage of, a float at Float Seattle costs $39 during their “happy hour,” or $69 normally. In addition, the entire experience takes about 90 minutes—not including the time to get there and back.

Ultimately, while it sounded strange at first, float therapy ended up being a great way to recover and relax, and I definitely see myself going back for a second try.