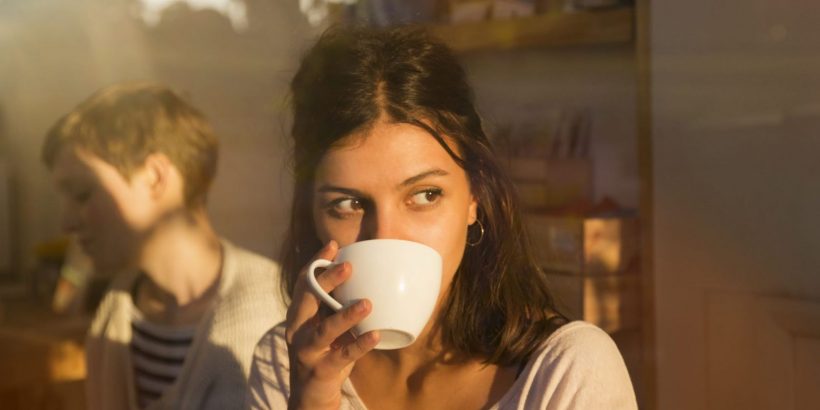 Writer Emmie Harrison-West used to drink up to eight cups of tea and two mugs of coffee a day. Growing sick of daily anxiety attacks, she decided to ditch the caffeine. But has it helped with her mental health?

Rubbing my eyes at my desk, I felt my heart erratically beating out of my chest. My breath was laboured and caught in my throat. It was 3pm on a Wednesday; I hadn’t showered, my hair was plastered over my face, I ached all over and felt exhausted.

The familiar sense of dread of feeling unaccomplished and useless started to set in, and I began to panic. Shaking uncontrollably with fear and anxiety, tears pricked my eyes.

It was happening again.

I looked at my desk, desperate for a distraction from my work notes – unintelligible to-do lists, pages of scrawled affirmations and priorities – and spotted coffee cups. Two, maybe three, stained mugs nestled beneath the chaos. Something needed to change.

Back in April, I gave up caffeine. Every day, I’d usually have two coffees, and six cups of tea (sometimes more). I was sleeping terribly. I found that I was staying awake until the early hours with panic and anxiety symptoms, going over every single wrong thing I’d ever said or done in my life to date; how I was a terrible friend/wife/daughter/sister, and never feeling fully rested.

Like so many of us, I told myself that I needed hot caffeinated drinks to keep going – to stay awake and help me work. Coffee was my crutch.

Even when I felt the familiar wave in my chest that bubbled up to my throat until I found myself choking on anxiety, I dragged myself to the kitchen to pop the kettle on. I thought a cuppa would help me unwind when, in fact, I was drowning in fear.

But in reality, it was making me ill. I was tired, moody and the least productive I’d ever been in all of my 29 years – constantly trudging up to the toilet with bladder problems while managing a relentless tide of nausea. I couldn’t find the willpower or motivation to exercise, either, and it felt really debilitating.

Is your coffee habit doing your mental health more harm than good?

It turns out I’m not the only one. According to YouGov, one in eight Brits say that they feel tired ‘all of the time’, and to combat this, the UK consumes 98 million cups of coffee a day – contributing to over 1 billion daily coffee drinkers globally.

Except, according to Hannah Braye, nutritional therapist at Bio-Kult, reaching for caffeine when we’re stressed is actually doing us more harm than good.

“Stress can leave us feeling exhausted and in need to unwind,” Braye tells Stylist. “However, reaching for stimulants such as caffeine and alcohol is a bad idea.

“Caffeine has been shown to amplify cortisol production, even hours after drinking it, and alcohol and other drugs can affect our mood by interfering with our neurotransmitters and reducing the absorption of important nutrients (which we need more of in times of stress).”

And those fluttering feelings of panic in your chest? “Caffeine also causes the brain chemical, adenosine to be blocked, increasing alertness and at the same time triggering the release of adrenaline,” according to Braye. “This is known to increase energy and consequently bring on panic, keeping you wide awake.”

Studies have shown that more than four cups of coffee a day is the minimum needed to trigger a caffeine-induced anxiety attack. “In each of us, we have a ‘flight, fight or freeze’ response,” according to Sas Parsad, founder of The Gut Co. “This is an instinct that is a positive response to anxiety that is designed to keep us safe from danger. When it occurs at inappropriate times or is fuelled by substances, it can be distressing.

“Too much caffeine can trigger this response through increasing anxiety as caffeine stimulates this part of our brain,” Parsad adds.

Caffeine can be healthy – in moderate doses

It is worth saying that moderate coffee and tea consumption can be really healthy. Not only are they rich in antioxidants (as well as essential nutrients magnesium and potassium), but caffeine can also help to stimulate the liver, increase circulation and can help reduce the risk of type 2 diabetes.

A recent study even found that coffee drinkers tend to live longer, whether they took sugar in their morning cup of joe or not. There’s also evidence that the antioxidants found in caffeine can lower the risk of coronary heart disease, various types of cancer (including breast, liver, head and neck), strokes, Alzheimer’s and Parkinson’s. But drinking it every day didn’t feel like it was doing me much good.

Going cold turkey on caffeine: why you need to cut down gradually

So, around three months ago, I decided to take matters into my own hands and gradually started to cut down on tea, to see if it helped. Over the course of a few weeks, I moved down to two cups a day alongside my usual cups of coffee, but I was still shocked to find that some black tea boasted just as much caffeine as coffee. I’d always thought having a tea was a break from a caffeine-laden coffee, but I couldn’t have been more wrong.

On a bad day, I could be putting away up to 1,000mg of caffeine (healthcare organisations recommend 400mg – that’s about four cups of coffee) – and, at the weekend, I could sink two or three espresso martinis with friends in one night. What was that doing to my body and mind?

Well, especially for those with general anxiety disorders (that’s apparently one in six of us), caffeine can exacerbate feelings of panic instead of helping with concentration, mental clarity and an energy boost. In reality, coffee is a central nervous system stimulant, hindering the brain from releasing chemicals that make us sleepy and flooding it with dopamine instead, so it’s no wonder that it aggravates and maintains anxiety symptoms if we’re already pretty sensitive to it.

If you’re already struggling with anxiety, caffeine can exacerbate those symptoms.

So I went cold turkey. I cut it out completely. No coffee and no tea. Decaf and fruit only. I won’t lie, it was horrendous. For the first 48 hours, it felt like I was in Trainspotting with the worst come down of my life cutting out the world’s most socially acceptable psychoactive drug. I felt sick, shivery, sweating, slept terribly and had banging headaches.

According to Anna Mapson, registered nutritional therapist and owner of Goodness Me Nutrition, this isn’t recommended. “If you’re going to cut down on caffeine, start slowly reducing over a few days, don’t go cold turkey,” Mapson says. “Withdrawal symptoms can include headaches, migraines, shaking, nausea and severe tiredness.

“You might try going half decaf bit by bit, or reducing the size of your coffee gradually over a few days,” she suggests. “Also be aware of caffeine in energy drinks, cola, dark chocolate and some supplements as this can all add to your daily caffeine intake.”

But, as they say: it gets worse before it gets better. Now, I’m the best I’ve ever felt.

I’m having the deepest sleep I’ve probably ever had, and as a result, I have more energy to boss both my work and my fitness routine time and time again. My skin seems clearer. I’ve found myself eating better, I pee much less, and even my hair and nails seem stronger. What’s better is that my anxiety and panic symptoms are so much more controllable.

My anxiety triggers are easier to spot earlier, and I’m not constantly teetering on the edge of a panic attack. I’m more able to practise steady, mindful breathing – without the caffeine-induced mist blurring my concentration or common sense. I’m more in control.

I have ‘a nice coffee’ if I’m out at the weekend, which makes me go a bit hyper as I’m much more prone to the side effects of the caffeine buzz. I talk faster and reap the benefits of the short burst of energy, but for once I can control it. Since having a coffee is rare for me, I can embrace it, rather than let it rule my everyday life like I once did.

Caffeine hangovers are real, and here’s how they impact your fitness regime

I haven’t touched tea, either, preferring decaf (which is a big deal for a northerner who once drank six cups of builder’s brew a day).

While I can’t deny both the benefits and pleasures of a good cup of coffee, I can safely say that giving up my daily rituals have changed my life – for the better. I’ve never slept better or felt healthier. I just wish it hadn’t taken me 29 years to realise it. I’ll never go back.