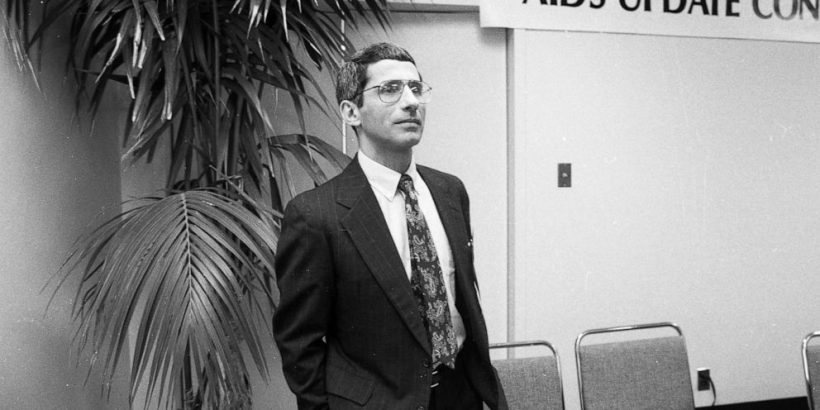 It’s a document that Dr. Anthony Fauci, the nation’s top infectious disease expert and arguably the most public face of the COVID-19 pandemic, remembers well.

“I literally got chills up and down my spine,” said Dr. Anthony Fauci, who was then rising star at the National Institutes of Health (NIH). “I said, I don’t know what’s going on here, but this is a new disease.”

That mysterious illness — now known as human immunodeficiency virus (HIV) — shaped the careers of a generation of scientists and doctors, and revolutionized a new era of activism and social justice reform. And it is an ailment that the medical and scientific community continues to confront in the U.S and around the world even as it battles COVID-19, another novel disease.

“It’s just extraordinary that we’re living through two historic outbreaks of infectious diseases that are now occurring simultaneously,” said Fauci – who steered the NIH through both crises and is now 80 years old. “It’s not easy,” Fauci added. “You have to focus on what your job is and the enormity of the responsibility and the enormity of the task ahead.”

Once ‘a death sentence’

It took decades of tireless work and advances, but now people with HIV — once a death sentence — are able to live happy and healthy lives in many cases.

“My diagnosis used to be a death sentence,” said Cecilia Chung, a director at the Transgender Law Center who was diagnosed with HIV 30 years ago. “Now because of the progress in science we are living, and living longer.”

Despite the advances, and unlike COVID-19, there is still no vaccine for HIV despite decades of research. And without treatment, people die — the virus is still claiming thousands of lives each year in the United States and just under 700,000 lives worldwide.

Some 1.2 million people are living with HIV in the United States, 14% of whom don’t know they have the virus, according to the CDC. Some 38 million are living with the disease around the world.

HIV and COVID have a number of parallels, including a disproportionate impact on minorities and those who have substandard healthcare. But COVID-19 quickly mobilized a national effort to battle it, resulting in highly effective and safe vaccines in record time and treatments that have helped ease the death toll, all in a matter of months rather than decades.

Now, many activists and researchers worry that the COVID-19 pandemic could result in a step backward for HIV because early data indicates that fewer people are getting tested and treated.

“I worry a lot about the underlying health of the nation and of people with HIV,” Dr. Rochelle Walensky, the CDC director, told ABC News. Walensky was herself a prominent HIV researcher prior to assuming her role at the helm of the CDC.

For those who lived through those early days of the HIV epidemic, it was a period marked by chaos and fear. Dr. Kevin De Cock, former director of the CDC Division of HIV/AIDS Prevention, recalls panic and havoc with patients being abandoned in hospitals and denied access to food and healthcare workers terrified they would contract HIV.

It was not until 1983 that the virus causing the illnesses and deaths was identified, and 1985 that a test for HIV became widely available. The tides began to turn in 1987 when the first treatment, azidothymidine (AZT) garnered approval as the first of dozens of antiretroviral treatments now available.

Today, there are highly effective drugs to keep the virus at bay. And for those who are HIV negative, there are daily pills and monthly injections that can prevent infection, even after unprotected sex and other high-risk exposures.

Fauci believes these therapies can bring the United States closer to its goal of eradicating the epidemic by 2030.

Scientists and experts alike say these medical advancements would not have been possible without the work of activists and reformers.

“It was a disease primarily killing a disenfranchised population — gay men,” said Phill Wilson, founder of The Black AIDS Institute. According to Wilson, scientific and political efforts were propelled by activists holding them accountable.

“Literally nothing happened that wasn’t driven by activism – including the science and especially the science,” Wilson said.

De Cock said HIV activism led to coalitions between leaders and community members. “The formation of coalitions was very important — coalitions who in otherwise other spheres of life would never see or talk to each other,” De Cock said.

And Chung highlighted the activists from ACTUP, a group that pushed the Food and Drug Administration (FDA) and the CDC to be more transparent, involve the HIV community and to safely approve drugs faster.

“Right now what we are seeing is that the COVID vaccine benefited from HIV activism and rallying for vaccines and treatments to be fast tracked,” she said.

Disparities in both epidemics

There are other parallels between the COVID-19 pandemic and HIV. People who can’t access treatment still die of HIV and it is still is a leading cause of death in some countries.

Here in United States, people living in the South, people of color and other marginalized groups, particularly the transgender Black population, are those most disproportionately impacted.

“HIV in this country started in a cohort of patients and ultimately it resulted mostly in the most vulnerable and the most stigmatized, the racial and ethnic minority,” Walensky said. “It’s the same thing that happened with COVID-19.”

According to Wilson, disparities in access to medical care — combined with medical mistrust — is a recipe for inequity.

“With misdeeds conducted in the past — how syphilis was dealt with for Black communities, and mistrust with the way power has been exercised in a racist way in institutions of power, the police, the electoral process, the war on drugs — it all contributes to medical mistrust,” Wilson said.

Chung, who advocates for transgender rights, pointed to not being included in HIV research.

“It wasn’t until the last 8 or 9 years that we began to analyze HIV data for transgender people,” Chung said.” And the science community needs to understand that beyond transgender people, there are also gender nonbinary people for which the data may look different.”

She also pointed to the criminalization of HIV in many states. For instance, in Indiana, an HIV-positive person can be punished for spitting, which advocates say discourages people from seeking care.

“We thought that at this point, because of the science, that people would recognize how irrational these laws are,” Chung said.

Light at the end of the tunnel

But both scientists and activists remain hopeful that there is a light at the end of the tunnel, and eradicating HIV is still possible.

“We have 40 years of experience behind us,” Wilson said. “So we know that we can do better because we have done better – and this means we have the muscles and understanding of how to do better.”

According to Wilson, it’s not enough to fight the virus. It’s about fighting racism, sexism and as he puts it, “all the isms” — rooting out the societal and systemic factors that have allowed a preventable viral disease to flourish.

“Knowledge is not enough,” said De Cock, who encourages focus on issues that often co-occur with those who have HIV, such as substance use and mental health issues.

“History has a way of repeating itself unless we learn from it,” Walensky said.

Chung argues for rebuilding the knowledge and training foundation — from sex ed in schools to gender and sexual diversity training in workplaces. She advocates for reform of outdated HIV criminalization laws and prison systems that fuel — rather than prevent — infectious disease.

“We are now living through a historic pandemic, the likes of which we haven’t seen in over 100 years,” Fauci said. “But we also need to focus on the fact that we have not eliminated HIV by any means.”

“If we maximally implement the many interventions we already have in a very proactive way, we could really reach the goal of ending it as a true epidemic in this country.”

Dr. Divya K. Chhabra is a writer and psychiatrist in New York City. Sony Salzman is the coordinating producer of ABC’s medical unit.