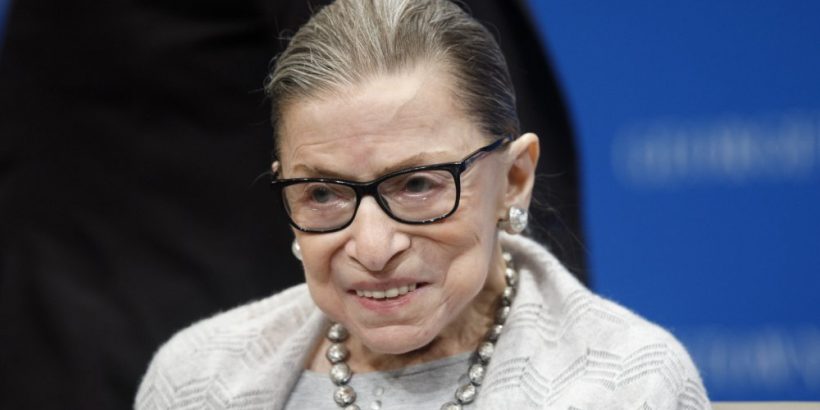 Most of us struggle over the idea of trying to fit a regular workout into our weekly schedules. And in a foreword in her trainer’s book, she wrote (via The Times of Israel): “I am often consumed by the heavy lifting Supreme Court judging entails, reluctant to cease work until I’ve got it right. But when time comes to meet with Bryant, I leave off and join him at the gym for justices.”

But even in her 80s, Supreme Court Justice Ruth Bader Ginsburg manages to put us all to shame by finding time to break a sweat twice a week with her trainer, Bryant Johnson. Ginsburg began working with Johnson in 1999, at the advice of advice of her late husband, Martin Ginsburg, because, as she put it then (via Politico), “I looked like a survivor of Auschwitz.” They’ve been working out together since then, except for between 2004 to 2007 when Johnson was deployed to Kuwait.

The RBG Workout is a full-body routine

Given that Ginsburg is closer to 90 than she is 80, we can be forgiven for wondering what goes into that workout, and whether it’s enough of a workout for the rest of us. But the woman we refer to as “The Notorious RBG” appears to be as determined to keep fit as she is to keep going on the bench.

The routine, as outlined in Johnson’s book The RBG Workout, is a full-body routine. It kicks off with a five-minute warm up and light stretches, and segues into a strength-training session that covers push-ups, planks, chest presses, squats, and hip abductor exercises, followed by more stretches to cool down (via Business Insider). Ginsburg is as tough as they come, but Johnson is realistic about the role he needs to play from time to time: “I’m kind of like the security blanket, the lifeguard,” he said. “I’m just here making sure nothing happens.”

RBG works out to opera music

While we’d be pumping out music that may do wonders for our heart rates, Ginsburg likes to work out to the soothing sounds of the PBS NewsHour… and if she works out at any other time except 7 p.m., she’ll elect to tune into cable news. Johnson also tells The Times of Israel that they don’t talk much during their routines, and aside from learning to enjoy PBS NewsHour, Johnson has also learned to appreciate the other selections on Ginsburg’s workout playlist: classical music. As Ginsburg tells Stephen Colbert in an interview about The RBG Workout, she says (via YouTube), “I mostly listen to opera recording.”

While Johnson describes the Supreme Court Justice as being “as tough as nails” and never having used the word “can’t,” he also says Ginsburg may be learning to live within her limits. He said he once spotted Ginsburg eyeing up a pair of boxing gloves Supreme Court Justice Elena Kagan left behind. The trainer asked, “Are you into that?” The Notorious RBG replied, “No, we’ll just leave that.”