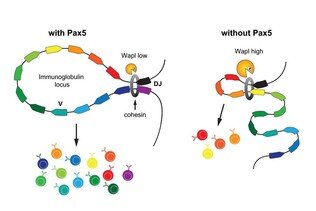 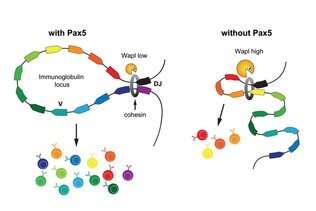 It has long been known that the acquired immune system can generate a vast antibody (immunoglobulin) repertoire by gene recombination in developing B-cells. However, it was not understood how the different immunoglobulin gene segments can meet each other in the three-dimensional space of a B-cell nucleus to undergo recombination, thus generating a functional antibody gene. Scientists at Vienna’s Research Institute of Molecular Pathology (IMP) have now discovered that the transcription factor Pax5 plays a central role in this process by promoting the interaction of immunoglobulin gene segments through cohesin-mediated loop extrusion. These novel findings have been published by Nature today.

When our body is confronted with a foreign intruder, a bacterium or virus such as the novel coronavirus SARS-CoV-2, it has several defense mechanisms in place. The innate immune system provides the first line of defense, acting fast and trying to contain the initial infection. Subsequently, the adaptive immune system kicks in to eliminate the pathogen within the next two weeks. Its potent weapons are highly selective and, in some cases, provide life-long protection from the infectious agent.

B-cells are a main pillar of our adaptive immune system. They develop in the bone marrow and later circulate in the blood stream. B-cells are responsible for the production of antibodies that are directed against invasive pathogens (so-called antigens). Each B-cell is highly specific to one antigen. Antibodies are large protein molecules, also known as immunoglobulins, that are secreted into the blood. They are also made in a membrane-bound form, which is present on the surface of B-cells and is therefore referred to as B-cell receptor (BCR).

To be able to combat a wide variety of antigens, B-cells are able to generate an enormously high diversity of B-cell receptors, probably in the order of 1011. This number by far exceeds the number of 20,000 genes present in the human genome. The solution to this problem lies in the modular structure of the receptor. Its variable region—the part that recognizes the antigen—consists of V, D and J gene segments that can be combined in almost endless ways by random recombination during B-cell development. Importantly, the 200 V gene segments are spread out over a long DNA stretch in the genome. However, all of these V gene segments have to participate in the V(D)J recombination process in order to generate a diverse B-cell receptor repertoire. To this end, all V gene segments need to physically interact with a D segment to undergo recombination, which is achieved by contraction of the immunoglobulin gene locus by folding into loops.

In 2004, Meinrad Busslinger and his team at the Research Institute of Molecular Pathology (IMP) discovered that the transcription factor Pax5 plays an essential role in the formation of these long loops that are formed during early B-cell development (see Figure). Sixteen years later, the Busslinger team has now elucidated how Pax5 regulates this loop formation (Hill et al., Nature, 1 July 2020). Part of this work was performed in collaboration with the group of Jan-Michel Peters (IMP), who recently published in Science that the ring-like protein complex cohesin is the motor driving chromatin loop extrusion.

“In our experiments with transgenic mice, we found that cohesin-mediated chromatin loop extrusion does indeed occur over the entire immunoglobulin locus in developing B-cells. Since the locus spans a vast 2.8 Megabase-long DNA region, the loops end up being considerably longer in B-cells compared to most other cell types where looping serves to organize and compress the genome,” explains Louisa Hill, a Ph.D. student and first author of this study.

The length of a loop depends on cohesin, which acts as the loop extrusion factor. As long as cohesin resides on chromatin, it continuously extrudes a chromatin loop until the process is actively halted by removing cohesin from the chromatin by the cohesin-release factor Wapl.

The amount of Wapl controls the residence time of cohesin on chromatin and thus determines the length of the chromatin loops in a given cell, as previously shown by the Peters group. The Busslinger group now discovered that Pax5 represses the Wapl gene and thus lowers the Wapl protein amount in developing B-cells, which leads to extra-long chromatin loops across the immunoglobulin locus, resulting in the participation of all V gene in V(D)J recombination (see Figure). As a consequence, the chromatin loops in the entire genome of the developing B-cell are also enlarged, indicating that the entire chromosomal architecture is altered to ensure that a diverse antibody repertoire can be generated to fight all possible infections.

“Our research has shown for the first time that Wapl protein levels are regulated to control an important biological process such as V(D)J recombination,” says Meinrad Busslinger, Senior Scientist and Scientific Deputy Director of the IMP.