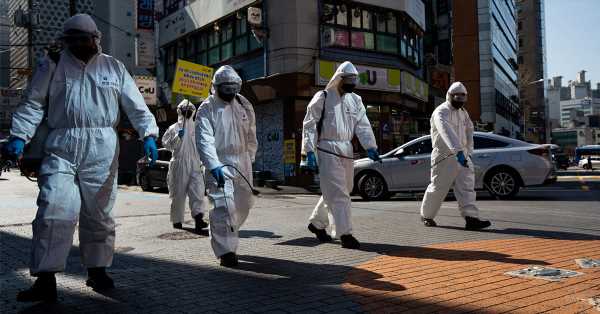 The COVID-19 outbreak was identified in South Korea and in the United States on the same day.

In the more than 2 months since then, South Korea has reduced its rate of new daily cases to one-tenth of its peak while the United States likely won’t see that peak for weeks.

South Korea is also tentatively planning to re-open some public facilities as early as next week.

The United States, on the other hand, is likely to have social distancing measures until at least the end of April.

The reasons for the disparity in the two countries’ outcomes have to do with more than just size, experts say.

It has more to do with the United States missing a critical window to ramp up testing and implement precautionary procedures to get on top of the virus.

The United States has more than six times the population of South Korea, but it’s reporting more than 15 times the number of confirmed COVID-19 cases and deaths.

Cities across the country are locked down, a last-ditch step that South Korea was able to avoid.

Experts say things might be different in the United States if the country had taken earlier actions — about a month or two ago — closer to what South Korea did.

Examining this alternate reality might also shed light on where the United States can go from here and whether at least parts of the country can still learn from and catch up with South Korea.

On January 19, a man checked into an urgent care clinic north of Seattle, Washington, put on a mask, and sat in the waiting room.

The 35-year-old nonsmoker had experienced a cough and a fever for the previous four days. Twenty minutes later, he was taken to an examination room.

A battery of tests for various illnesses came back negative. A test for COVID-19 came back positive.

On the same day (January 20 in South Korea), a woman, also 35, at Incheon International Airport outside Seoul with a fever.

Like the man at the Seattle clinic, she had arrived from Wuhan, where she lived. She was taken to a hospital, where she also tested positive for COVID-19.

“It’s one person coming in from China. We have it under control. It’s going to be just fine,” President Donald Trump told Americans on January 22.

The officials told the companies they needed them to develop tests for the coronavirus and that they’d rapidly approve new tests.

A week later, the first test was approved.

In early February, the U.S. Food and Drug Administration (FDA) approved a coronavirus test developed by the Centers for Disease Control and Prevention (CDC).

However, it would prove unreliable and mostly unusable.

“We bought ourselves some precious time early on when we closed travel to and from China. That was very important because we reduced introduction. So, we were really in excellent shape at that time,” Dr. William Schaffner, an infectious disease expert at the Vanderbilt University School of Medicine in Tennessee, told Healthline.

“But we were hampered shortly thereafter because our capacity to test was so curtailed, both on the public and private side,” Schaffner added. “So we didn’t know how widespread the virus was in our country because there wasn’t testing.”

It wasn’t until late February that new kits were distributed by the CDC and the FDA loosened regulations to allow hospitals and labs to use their own coronavirus tests on patients.

In the meantime, community transmission had begun in both countries.

“At that point (of community spread), we couldn’t test widely to see how widely the coronavirus had penetrated into the U.S.,” Schaffner said. “That gave the virus a running start.”

On February 28, President Trump told Americans that the coronavirus is “going to disappear. One day, it’s like a miracle, it will disappear.”

As in other countries, that surge in cases led to waits at hospitals in South Korea cities hit hard by the virus.

It also caused concerns over shortages of medical equipment, including face masks.

However, the scope of those challenges was recognized in early March and the spread of the virus was largely contained. About 70 percent of confirmed cases were located in the vicinity of one city.

Experts say this was the critical window that defined the countries’ divergent responses.

“This would have been the time to test widely,” Schaffner said. “But we simply didn’t have the capacity at that time.

South Korea was testing before community spread was even confirmed to be occurring in the country, Schaffner noted.

“What they decided was a combination of widespread testing along with follow-up of all positives,” he said. “As a consequence, they were able to find infections and reduce or even abort widespread transmission.”

In early March, South Korea closed schools. They also encouraged people to work from home as well as the closure of offices and the cancellation of public events.

Due to these measures and their proactive “test and trace” strategy, South Korea avoided having to implement the sort of mandatory lockdowns implemented in places such as Wuhan, Italy, and now many urban areas in the United States.

At the end of February, South Korea had 3,700 confirmed cases and the United States had 74.

Five days later, on March 3, the number of new cases identified each day in South Korea peaked at 851. The United States had identified 118 cases total.

That was after a one-day jump of 2,853 new confirmed cases. South Korea’s total jumped by 93 new cases that day.

It wasn’t until March 25 that the United States finally caught up with South Korea in terms of raw number of tests conducted.

By that time, the death rate in the United States had already surpassed that of South Korea — people in the U.S. had died from COVID-19 versus in South Korea.

“[South Korea] does provide a counterfactual example of what could have happened if we had tested early and, more importantly, acted on that information,” Dr. Thomas Tsai, MPH, who has helped build models around healthcare system capacity in the United States at Harvard’s Global Health Institute, told Healthline. “We stayed on the sidelines watching the and the Seattle outbreak, and most of the states and federal government did nothing.”

“I think the scenario could have looked very different if we had more testing earlier,” Tsai added.

“Probably by today we will have done more tests than South Korea did in 8 weeks, in the last 8 days,” Birx said at a virtual town hall hosted by Fox News March 24.

She said that was because the federal government has “transformed the testing process.”

South Korea had tested 1 in 130 people as of Monday morning.

“We’re still at a much smaller number proportionally. The time to rest on our laurels is not today,” Tsai said last week. “We’re very much still in the very early days.”

Because of the “running start” the virus got in the United States “we’ve been playing catch-up in defining where the virus is, in terms of hot spots, cold spots, warming spots,” Schaffner said. “We know we have a big hot spot in New York and a bunch of warm spots, and the rest of the country is warming up.”

South Korea was “able to put a halter on this horse and rein it in… but we weren’t able to get the halter on — and didn’t know where it was running,” he said.

South Korea is preparing for schools, churches, gyms, and entertainment venues to possibly reopen at the start of next week.

President Trump said Sunday that the United States’ restrictive limits on movement will stay in place for at least 4 more weeks.

Schaffner noted that a better goal for the United States might be to try to catch up with where China has been in terms of impacts rather than South Korea at this point.

Even there, “I don’t think we can get quite as low as China because we weren’t as comprehensive at introducing social distancing.”

Schaffner does think the current distancing will reduce transmission and provide a benefit, but he notes that those benefits will likely be uneven across such a large country.

New York and other “warm spots” may be tough but, “I think we can avoid Italy over much of this country.”

More than 11,000 people have died in Italy from the outbreak.

“For those states who are likely days or a few weeks behind (New York City), they should learn the same message we didn’t learn from South Korea earlier,” Tsai said.

“You can’t look at the numbers and throw your hands up,” Tsai said. “Destiny is not written in stone. Every single day we have the agency to change that growth curve” of infection and hospitalization rates.

Late 2020: Preparing for the next one

In a way, the timeline of South Korea’s fight against coronavirus began in the late summer of 2015.

The government was criticized for a slow response and that outcry has been widely seen as the cause for regulations and actions that allowed for such a rapid response to this new coronavirus.

In that sense, perhaps this is just the start of the U.S. timeline in the fight against the next novel coronavirus or other health crisis.