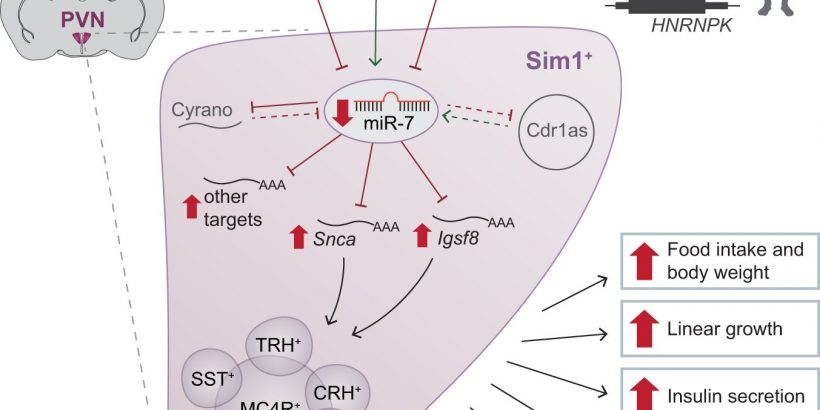 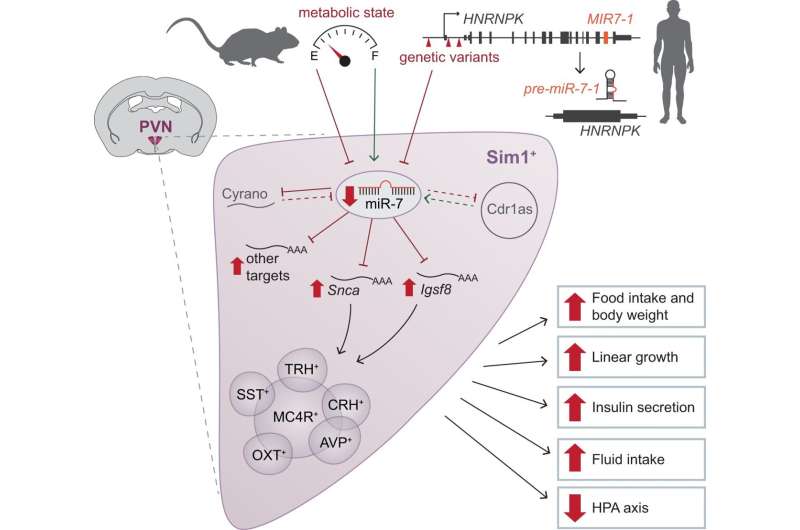 Heredity plays a role in how strongly we are predisposed to put on excess weight. In recent years, researchers have extensively examined which genes and gene variants play a role in this, and have identified roughly one hundred obesity susceptibility genes. However, genome-wide association studies have shown that less than half of all cases of hereditary obesity can be explained by these genes. The other half are the result of factors that, although part of our DNA, are not genes in the classical sense. Epigenetic information would be one example of such a factor.

A group of researchers led by Professor Markus Stoffel from the Department of Biology have now identified a further non-classic genetic risk factor for hereditary obesity: an endogenous microRNA molecule known as microRNA-7. Their research appears in Nature Communications.

Like genes, the blueprints for microRNA molecules are part of our chromosomes. But while genes act as the building instructions for proteins, the information contained in microRNA is not translated into protein form. Instead, the microRNA molecules act in our cells in the form of RNA. “MicroRNA-7 is the first microRNA for which we’ve been able to demonstrate an association with obesity,” Stoffel says.

Effect on mice and humans

Together with his team, Stoffel bred mice in which microRNA-7 was missing in certain nerve cells of the hypothalamus, the control center between the endocrine system and nervous system. These mice demonstrated a pathologically increased appetite and became obese.

The ETH researchers were also able to demonstrate such a link in humans. Together with scientists from the University of Cambridge, they analyzed genomic and medical data, including the anonymized data held in a British database relating to 500,000 people. This allowed Stoffel and his colleagues to show that people with genetic variations on their chromosomes near the blueprint for microRNA-7 are heavier and bigger than average. The consequence of these genetic variations is that the above-mentioned nerve cells of the people affected produce less microRNA-7.

For Stoffel, it was no surprise that this effect can be observed in both mice and humans. As he points out, microRNA-7 is a molecule that emerged very early in the evolutionary history of the animal kingdom and has survived to this day. It persists unaltered in very many animal species—from nematodes, to all vertebrates and human beings.

“Up to now, it was unclear why genetic variations were only able to provide an explanation for less than half the causes of hereditary obesity,” Stoffel says. “Our study now shows that it’s not enough to look for the answer solely in the genes that encode information for proteins. The parts of DNA outside the genes also have to be examined, such as the regions containing the blueprints for microRNA.”

In theory, at least, these new findings could also be used in medicine. There are already RNA-based drugs that use the mechanisms of action of microRNA molecules in the body. It may one day be possible to develop a treatment for people who are obese as a result of their hypothalamus producing insufficient amounts of microRNA-7. Treatment for the converse case would also be conceivable—delivering more microRNA-7 for people with a predisposition to pathological low body weight.