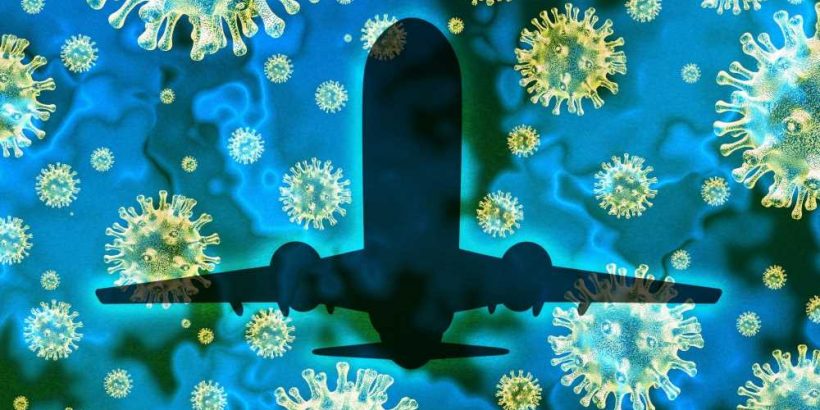 Many studies have indicated that air travel was integral to the long-distance spread of severe acute respiratory syndrome coronavirus 2 (SARS‑CoV‑2). It was observed that UK citizens who returned from mainland Europe such as France, Spain, and Italy, rather than China, were responsible for introducing SARS-CoV-2 into the UK. Sequencing studies have highlighted approximately 1,300 independently-introduced virus lineages in the UK during early 2020, which led to the first COVID-19 wave. It was estimated that 0.02% of infected passengers arrived during this period out of 8 million passengers. However, this was lower compared to the 1.3% of passengers who left Wuhan during the pandemic's beginning, which caused the rapid spread of the disease throughout the world.

During the start of the second COVID-19 wave, transmission from passengers on a flight from Greece to Ireland was also reported since the attack rate was 10 to 17%. Moreover, this transmission was found to occur irrespective of the use of face masks and enforcement of social distancing. Many epidemiological and modeling case studies have confirmed that infection can spread to multiple passengers on a flight from one infected person. Additionally, the transmission of other respiratory pathogens has also been observed within crowded airport terminals, suggesting that one infected person can infect several people traveling to multiple destinations.

Although international flights were stopped to prevent the spread of the virus, it led to significant job and economic losses in most countries. Consequently, there is an urgent push from the travel industry to reopen international air routes. However, in order to ensure public health protection, this must be done responsibly, practically, and economically. To achieve this, effective disease surveillance and control are necessary, as well as the development of cost-effective and practical surveillance technologies. The public's support is also crucial for programs involving isolation and quarantine.

An increase in screening measures at the airport entry is observed to be ineffective and highly resource-demanding. While several national disease surveillance strategies are available, effective ways to estimate disease entry from overseas travelers are limited. However, the continuous import of SARS-CoV-2 variants in the UK suggested that the current surveillance strategies are not entirely effective both at the point of entry and departure. Several countries have implemented quarantining of passengers for 10 to 14 days on arrival to resolve this problem.

However, self-quarantining is effective only if people obey the quarantining policies. Obedience is a socially learned behavior where people comply with fundamental social norms or formalized laws, while disobedience is when people refuse to obey such laws. Individuals who refuse to follow quarantining policies due to disobedience are also more likely not to follow other health advice to prevent the spread of COVID-19. The risk of infection increases for them and others as a result.

A new study under review at the Scientific Reports journal and currently posted to the Research Square* preprint server aimed to analyze the increased risk of COVID-19 spreading due to human behavior associated with travel among UK air travelers that have flown during the pandemic. 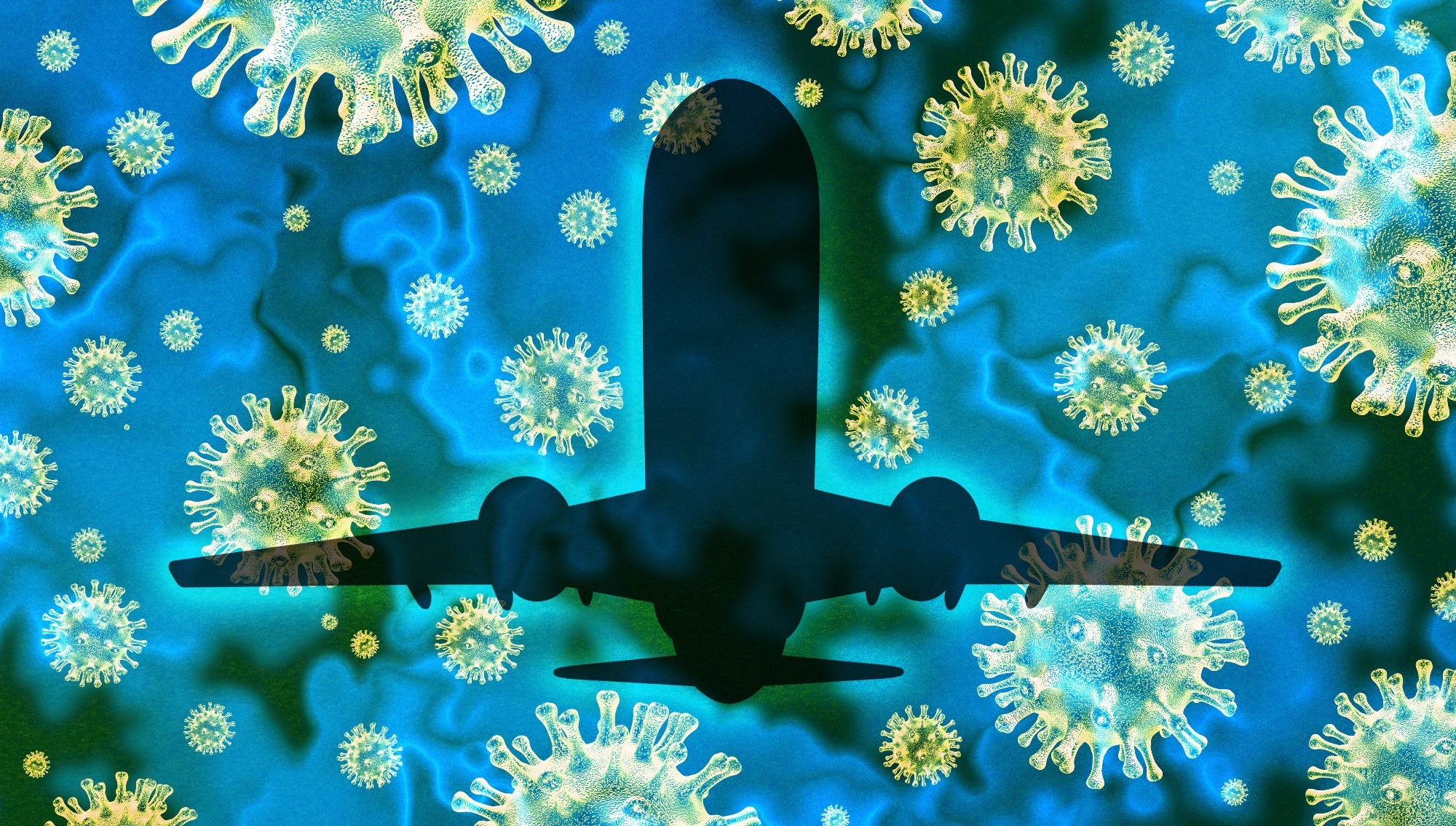 The study occurred when the UK was under strict COVID-19 restrictions and involved participants aged 18 years and above who had undertaken foreign travel and were living in the UK. The participants were recruited from YouGov's online research panel, an ESOMAR-accredited market research company. The survey was conducted online through the YouGov data portal, and the invitation to participate in the survey was sent through email.

The survey comprised 18 closed-ended questions, which consisted of questions associated with air traveling and sociodemographic topics. The questionnaire was designed by public health specialists, environmental microbiologists, and social scientists. Data on gender, age, employment status, social grade, marital status, and educational or professional qualification were also collected. In addition, Postcode was collected from the participants to determine their social grade and indices of multiple deprivations (IMD). Moreover, information on whether there was a child in the household, the social media platform they used in the previous month of the study, their travel history, and their COVID-19 infection status were also collected.

The results indicated that most of the participants had a good knowledge of the common COVID-19 symptoms, while the less common symptoms were not recognized by most of them. In addition, females and older participants were found to be better at recognizing symptoms. Adults with children also showed better recognition of symptoms than those without.

Out of the total percentage of participants who took part in the study, 27% showed strong concern about catching COVID-19, 56% showed some concern, and 17% showed no concern about catching the disease. Females and those with children were observed to show greater concern. Additionally, 1.3% of the participants were previously reported to test positive for COVID-19, while 10.3% believed they had been infected but did not undergo formal testing.

Furthermore, 23% of the participants reported boarding a flight while being ill, with most of them belonging to the younger age group and without children. Moreover, 21% of participants indicated that they would return to the UK on their scheduled flight despite experiencing potential COVID-19 symptoms, 27% indicated they were unsure, and 52% indicated that they would not. Individuals of the young age group were more likely to return to the UK irrespective of COVID-19 symptoms. Similar responses were obtained when people were asked if they would travel back with another person who was experiencing symptoms while they were not.

10.2% reported they would not undergo the 10-day quarantine, while 83% said they would. The younger generation was more likely to disobey the self-isolate guidance than the older generation. Additionally, 15.2% were observed to have flown since the beginning of the pandemic, with the younger generation and those belonging to the affluent social grades taking the highest number of flights. Among them, 47% reported feeling safe while taking the flight, while 13% reported that they did not. Moreover, 32% said face coverings were effective on the flight, 32% said they were ineffective, and 36% said they were partially effective. While 93% of individuals revealed they would wear face masks on the plane, 31% would do so only if it was mandatory. Among them, those in the 55 age group were found to wear face masks whether it was compulsory or not.

Therefore, the current study indicated that the lack of compliance among a particular section of air travelers and insufficient government policies and guidelines led to the entry and rapid spread of SARS-CoV-2 in the UK. Therefore, for future pandemics, emphasis must be given so that all individuals follow public health guidelines, hygiene, and quarantine measures to prevent the spread of infection. Furthermore, the disease symptoms should be explained, so everyone understands them, especially the young.

One significant limitation of the study is that it included only UK citizens. However, non-UK citizens with diverse cultural and socioeconomic barriers might also play a role in the risk of entry of SARS-CoV-2 in the UK.

Research Square publishes preliminary scientific reports that are not peer-reviewed and, therefore, should not be regarded as conclusive, guide clinical practice/health-related behavior, or treated as established information.