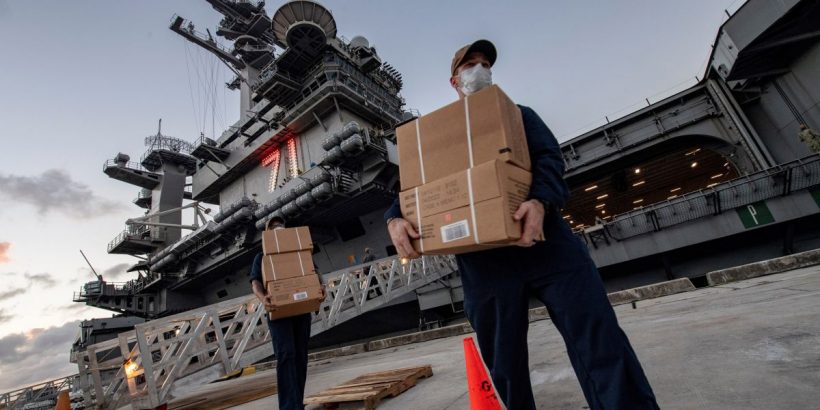 The story of an aircraft carrier beset by coronavirus reveals how quickly SARS-CoV-2 spreads in close quarters — and how typical procedures fail in a time of pandemic.

A new New York Times analysis into the case of the USS Theodore Roosevelt, a naval warship with nearly 5,000 crew aboard, illuminates how rapidly the disease spread, outpacing the Naval hierarchy’s ability to respond. The captain of the ship, Brett E. Crozier, wrote a desperate letter to other Naval personnel in the Pacific asking for help; he knew the letter would end his career, sources told the Times.

After the letter was published by the San Francisco Chronicle, Crozier was removed from his post by acting Navy secretary Thomas B. Modly. Video of Crozier getting a hero’s send-off by his crew went viral, and Modly flew to the ship — docked near Guam — and gave a speech calling the captain “stupid” and “naïve.” The resulting outcry led Modly himself to tender his resignation.

The virus likely came aboard the ship in Da Nang, Vietnam, where the Roosevelt made a port call on March 5. Some sailors spent a night in a hotel where two British nationals who later tested positive for the coronavirus also stayed, the Times reported. There were also military flights from Pacific bases onto the ship to deliver supplies in the following weeks, another potential source of viral transmission.

On March 24, the ship went into communications lockdown after three crew members tested positive for SARS-CoV-2, the scientific name for the new coronavirus. Those crew members were flown to Guam. The ship followed, docking near Guam on March 26. Navy officials debated their response, with Crozier arguing for a nearly complete evacuation of the ship and higher-ups arguing for keeping most crew aboard.

Crozier’s letter, sent on March 30, clearly explained the reason ships are so dangerous during the coronavirus pandemic. Sailors aboard the Roosevelt sleep in bunks two or three high, eat in communal mess halls and share bathrooms. Social distancing is not possible.

“[T]he only effective method to preserve an individual’s health is total isolation for 14+ days in accordance with the NAVADMIN [Naval Administrative message] (i.e. individual hotel/barracks rooms with separate heads],” meaning bathroom facilities, Crozier wrote. “Due to a warship’s inherent limitations of space, we are not doing this. The spread of the disease is ongoing and accelerating.”

The Captain’s situation was reminiscent of the Diamond Princess, the cruise ship that was quarantined near Yokohama Japan in February after coronavirus ran rampant among crew and passengers. Of the 3,711 passengers and crew aboard, 712 tested positive for the coronavirus, according to the CDC. An estimated 17.9% of those people were asymptomatic, highlighting another challenge of the coronavirus at sea: It’s impossible to tell by symptoms alone who is sick and spreading the disease. Compounding that, preliminary research has suggested that people with the virus might be most infectious when they have only mild symptoms, Live Science previously reported.

A study of the Diamond Princess’ transmission dynamics published online Feb. 29 in the journal Infectious Disease Modelling suggests that each person carrying the coronavirus could have infected around seven people (and up to 11) right before quarantine within rooms was implemented. This was higher than land-based estimates, which put the viral reproductive number at 5.7 in Wuhan before that city locked down, which means at that particular time each infected person was infecting about 5.7 others with the virus. On the Diamond Princess, crew members working in food service seem to have been a route for the virus to spread, one that continued after passengers were quarantined in their cabins, an investigation found. This was because passengers continued to have contact with crew delivering their food, allowing passengers to transmit virus to the crew and vice versa.

Aboard the Roosevelt, of course, sailors did not even have the luxury of private cabins. And according to the Times, the catastrophe aboard the Roosevelt may be a warning for the military: Sailors on three other carriers (the Ronald Reagan, the Carl Vinson and the Nimitz) have tested positive for the coronavirus.

The one-month trial gives you access to all of the educational site’s 9,000 activities in reading, science, math and art. Keep your child busy and learning while we are all stuck indoors.
View Deal