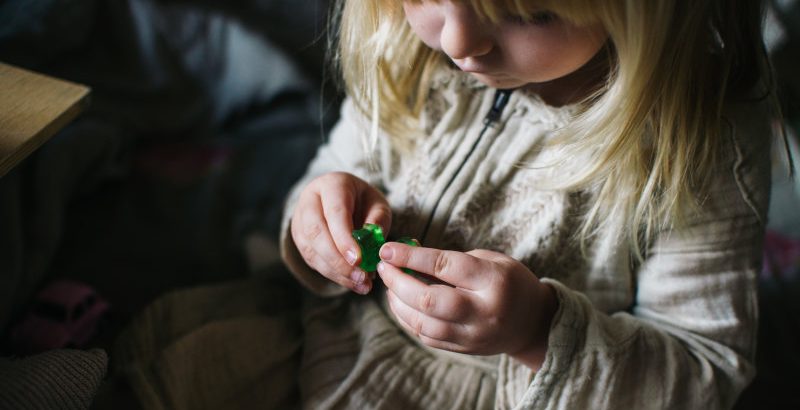 Sleep for many parents is the stuff of nightmares. The stresses of adult life fade into insignificance compared with a toddler who resists everything in our arsenal to lull them to sleep or who wakes for the umpteenth time night-after-night.

Exhausted and desperate, more parents are turning to melatonin gummies to help their children sleep and to save their own sanity. 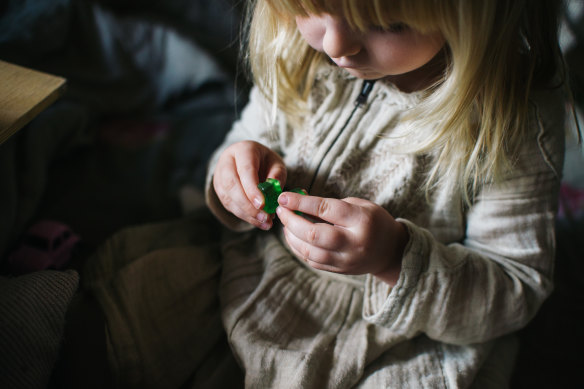 Melatonin gummies can help, but they are no magic bullet, experts warn.Credit:Getty

And why wouldn’t they? Melatonin, a hormone that is naturally secreted by the brain, helps our body to know what time it is (bedtime) and makes us feel sleepy.

As growing numbers of children are chewing gummies before bed (in the last decade, use has skyrocketed 650 per cent) there is an increasing array of rainbow-coloured products, adorned with cute cartoon animals, crescent moons and labels like “Nite, Nite”, “Sweet Dreams” and “Help them fall asleep naturally”.

Kids gobble the sweet, fruit-flavoured “supplements” like lollies and the parents, if they’re lucky, get a moment of respite and a sweetly sleeping babe. What a dream. What could possibly go wrong?

One yet-to-be-published study by Central Queensland University (CQU) researchers found, of 255 Australian parents, 70 per cent used melatonin to help their children sleep. Separate US research suggests, it is the second-most popular “natural” children’s product, behind multivitamins.

Melatonin can be effective in children with sleep disorders related to Attention Deficit Hyperactivity Disorder, autism, other developmental disabilities or visual impairment, but the TGA does not recommend melatonin for children otherwise.

The primary reasons are that the research is lacking, findings are inconsistent and the supplements are unregulated.

A report, published in June, found accidental melatonin overdose is increasingly common among children and, in 2021 in the US, five children required mechanical ventilation, and two died.

One 2017 study of 31 different brands found the amount of melatonin on the label rarely matched the amount in the gummies and 26 per cent were “contaminated” with serotonin, which can be harmful to children.

“If you’re on Facebook, parents say, ‘it’s amazing’,” says Sarah Blunden, a professor of Clinical Psychology and Head of Paediatric Sleep Research at CQU. “What I hear from all my parents that come in to see me is, ‘it’s natural’. And I answer them, ‘it’s not natural’… We do have natural melatonin, but what you’re getting in a bottle is not natural. It’s a chemical.”

Side effects of melatonin use include irritability, headaches, and it can even make some children aggressive, Blunden says.

Kate McLoughlin is the Chef de Mission of the 2024 Australian Paralympic Team. When her son was 8, he was prescribed melatonin to counter ADHD medication, which made it “incredibly difficult” for him to sleep. This led to intense nightmares, so they switched to lower-dose, slower-release gummies.

“There were no side effects and whilst some nights they worked better than others, they always calmed him down,” says McLoughlin, whose son is now 11. “We don’t use them anymore as his sleep has improved.”

Blunden doesn’t blame parents for giving it – trying to get young kids to sleep can be “a complete nightmare” – and it often helps.

But, given the lack of long-term research on developing brains – Blunden recalls a recent family she treated who were giving it to their three-month old – it ought to be a last resort. She is shocked it is being handed out like candy by doctors.

“In Australia, it’s not TGA approved, and it is rampantly prescribed by doctors and paediatricians. It staggers me.”

She adds that there have been concerns about how melatonin is “chemically intertwined” with puberty and mood-regulating hormones, including tryptophans, serotonin and dopamine.

“It interacts with a whole range of other stuff,” Blunden says. The research remains inconclusive although one 2021 study of adolescents with autism suggested long-term use did not affect puberty.

Research suggesting melatonin causes problems in puberty has only been in animals, says Chris Seton, a paediatric and adolescent sleep physician at the Woolcock Institute.

“You can’t translate rat research to humans,” he says, adding that its use is “no more problematic” in teenagers than kids of any other age.

Seton thinks a sensible use of melatonin is for jet lag (if parents set their clock to the timezone they are going to and then, on the day of flying, give melatonin one hour before bedtime in the destination timezone and for a couple of days on arrival, it can help). But, like Blunden, he says as a rule melatonin gummies should be a last resort.

Most of the families he sees have tried melatonin gummies: “If it did work well then all these kids wouldn’t be coming to see me, they’d be fixed.”

It is being overused, Seton says, it is replacing more effective approaches in children who do not have a physical sleep disorder, and it has become a symptom of an over-medicalised society.

This is because many parents, and doctors, are turning to melatonin to manage behavioural sleep issues.

“Because people view melatonin as the magic bullet, they won’t do the behavioural aspects of improving their [child’s] sleep,” he says. “So melatonin can not only be a neutral thing that doesn’t work, it can be a negative thing that stops people doing the other treatments that they should do that are a bit harder to do… negotiating all the behavioural stuff takes time.”

Help exists to identify the cause, decide if melatonin gummies might help, and explore alternative solutions at paediatric sleep clinics, like Woolcock’s, and via sleep psychologists.

“If you think it’s affecting your child’s health or your health, then it’s a problem,” Seton says, adding that, in toddlers, snoring, waking multiple times every night, and difficulty getting to sleep are all “red flags”.

Blunden would like to see more research, so experts can do a more effective cost benefit analysis, and weigh up the risks of giving melatonin versus the risks of what can happen when a child doesn’t sleep and parents are stressed and exhausted.

She would also like to see sleep education as part of prenatal classes, in part to address unrealistic expectations about what “normal” sleep looks like.

“It’s almost like a badge of honour to get your child to sleep,” she says. “And so [melatonin] becomes a quick fix.”

Herein lies the problem, says Seton. Helping our children settle and learn to sleep typically requires the kind of parenting for which there is no quick fix.

“There’s no magic bullet for keeping a three-year-old in their bed … Some things don’t have instant solutions.”

Make the most of your health, relationships, fitness and nutrition with our Live Well newsletter. Get it in your inbox every Monday.

Most Viewed in Lifestyle