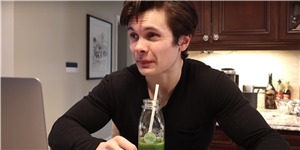 It sounds like a beginning of a bad joke: A bodybuilder walks into a juice shop and asks to try a 48-hour juice cleanse…

For YouTuber and bodybuilder Will Tennyson, the suggestion is an unfortunate reality. Tennyson tried a juice cleanse for two days, and it’s predictably tough for the junk food-loving buff dude.

Tennyson says he goes to the gym four times a week to combat his “massive appetite and stupid food challenges.” When he started feeling “blah” and sick from said diet, he decided to do something radical. Tennyson tried a curated, prepackaged cleanse from a local juice shop in Toronto. His starting weight was a buff 180 with an impressive daily gym routine.

Between dark green drinks and (naturally) sugary fruit drinks, Tennyson drinks six juices drinks per day during the cleanse. But after juice two on Day One, he says he is already sick of juices. And by drink five, Tennyson says the thought of food is making him angry— and he still has more than 24 hours to go.

“I would honestly kill a man for a slice of pizza right now,” he says out of frustration and lack of energy.

The juice cleanse only gave Tennyson a total of 500 calories daily, which is much lower than the recommended caloric intake for an adult man, let alone a bodybuilder. And the deficit takes a toll.

“This is like Yom Kippur but worse,” Tennyson says on Day Two. “My head is ringing. I’m starting to get angry for no reason at all. This cleanse may end violently. My large-ass nostrils are starting to pick up scents of food where there is absolutely no food around. I’m starting to believe there is a donut-scented candle that just follows me around everywhere I go.”

Clearly a juice cleanse is no joke, and many reputable nutritionists don’t recommend the practice due to its many proven downfalls.

“There are a lot of nutrients that you miss out on,” nutritonist Andy Bellatti tells Business Insider of cleanses. “When you juice a fruit or a vegetable, you completely get rid of all the fiber. Fiber has many health benefits. It helps to lower our blood pressure. It’s great for our heart health.”

Bellatti also says juicing fruits only leaves behind concentrated sugar without all the fiber and nutrition that makes fruits valuable.

“People don’t understand that your body is constantly detoxing,” Bellatti says. “The kidneys and liver are two organs that are in charge of detoxing the body. You don’t need to do anything else in terms of drinking any juice to help the body detox.”

At the end of his experience, Tennyson has lost six pounds and has a more lean physique. But he recognizes it isn’t sustainable weight loss.

Even so, Tennyson says he would actually recommend a juice cleanse, especially to those who feel like they need a reset. But he would not recommend drinking juice for more than three days.

Tennyson says, “I know it has only been two days, but this has felt like an eternity.”