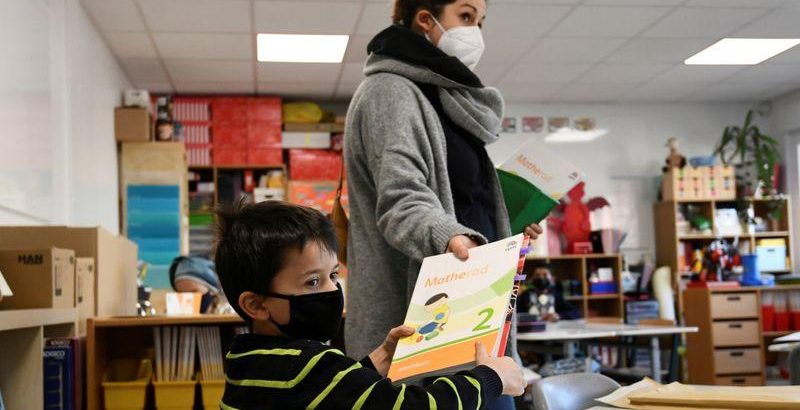 FILE PHOTO: A schoolchild participates in a lesson at Gustav-Falke elementary school, after it reopened according to first measures to lift the coronavirus disease (COVID-19) lockdown in Berlin, Germany, February 22, 2021. REUTERS/Annegret Hilse

BERLIN (Reuters) – Germany approved three COVID-19 tests for home use as part Health Minister Jens Spahn’s strategy for mass testing to help Europe’s biggest economy emerge from a lockdown that has been in place since mid-December.

The infection rate in Germany fell steadily in the first weeks of the year but has stagnated in recent days, adding to signs that it could be difficult for the country to ease restrictions when the lockdown is due to end on March 7.

The Federal Institute for Drugs and Medical Devices, Germany’s pharmaceutical regulator, on Wednesday approved antigen tests made by Healgen Scientific, Xiamen Boson Biotech and Hangzhou Laihe Biotech for use by people who are not medical professionals, according to its website.

Other countries are also banking on home tests to help limit the spread of the virus. In Austria, self-tests are already being used in schools, and they will be available to the public for free at pharmacies from next week.

In England, volunteers and police began knocking on people’s doors this month to hand out COVID-19 testing kits to try to halt the spread of a highly infectious variant that originated in South Africa.

In Germany, the number of confirmed coronavirus cases rose by 8,007 to 2,402,818, according to data from the Robert Koch Institute for infectious diseases on Wednesday.