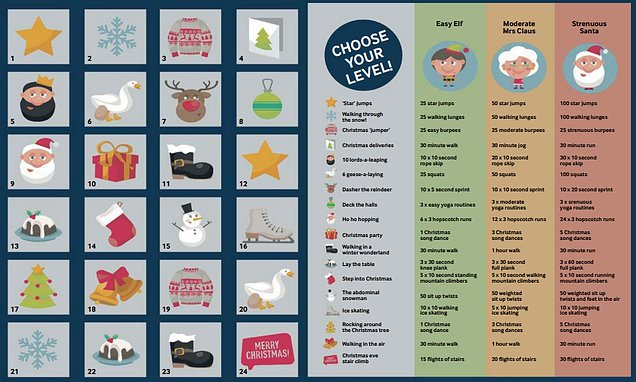 Well, swapping your sweet treats for an activity-a-day could be the key to avoiding the festive bulge.

With evidence to suggest people gain up to 2lbs (0.9kg) over Christmas, scientists wanted to see if festive-themed exercises in the run up the big day could help 107 inactive adults get off their bums.

Exercises such as ‘snowman sit-ups’ and ‘dasher the reindeer sprints’ were used as part of the advent calendar, created by researchers at Loughborough University. 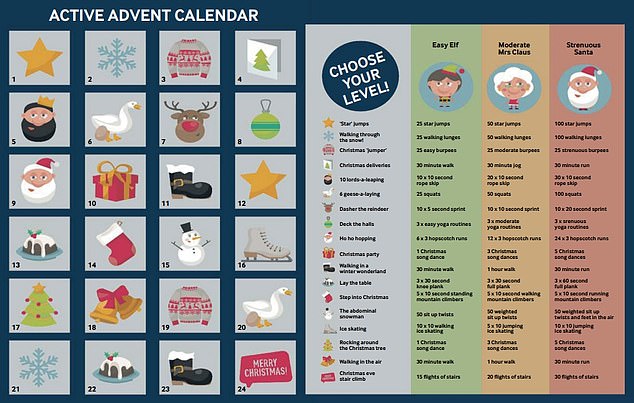 People taking part in the trial did about 21 more minutes of physical activity each week, compared to participants who were merely given a leaflet advising them on how to live a healthy life.

Physical activity, as well as diet, is hugely important for staying slim.

The NHS recommends at least 150 minutes of moderate aerobic activity, such as cycling or brisk walking, every week.

Experts said people might welcome public health campaigns to help them to be more physically active and less sedentary during the festive period.

Results of the pilot were published in the Christmas issue of The BMJ.

Because the sample size was so small, the researchers could not comment on its effectiveness.

But they said it was safe, inexpensive, could easily be done on a larger scale and could potentially change long-term behaviours towards physical activity. 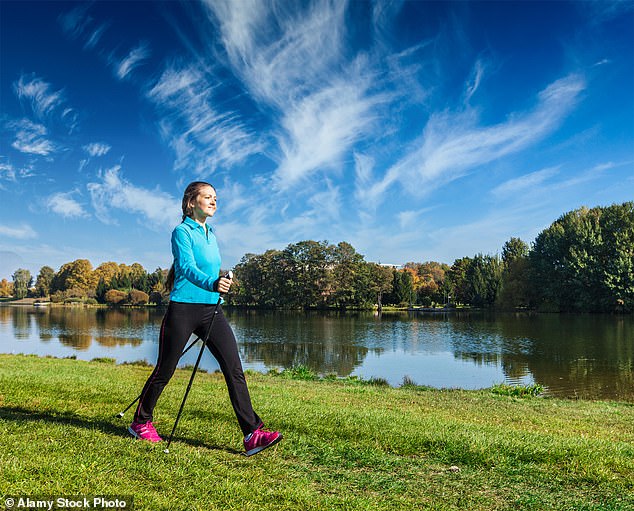 Another activity involved in the pilot was ‘Christmas deliveries’ which involved either a 30-minute walk, jog or run depending on your chosen difficulty level

The 107 inactive adults who took part were recruited from social media, workplaces, and community groups in November 2021.

Those taking part were emailed an activity each day between December 1 and December 24.

WHAT ARE FIVE SIMPLE STEPS TO STAYING ACTIVE?

*As recommended by Liverpool University researchers

1. Take the stairs instead of the lift or escalator wherever possible.

2. Walk to work, get off the bus a stop early or park away from the office so you have to walk in.

3. Move the printer or water cooler away from your desk so you have to get up regularly during the working day.

4. Do your weekly shop at the supermarket instead of shopping online.

5. Don’t spend the whole weekend on the sofa – mix up relaxing with activities like cleaning the house, shopping or going for a walk.

Participants were also allowed to choose their difficulty level each day.

Another activity involved in the pilot was ‘Christmas deliveries’ which involved either a 30-minute walk, jog or run depending on your chosen difficulty level.

Burpees were called ‘Christmas jumpers’, squats were known as ‘geese-a-laying’.

Those taking part in the activity advent, referred to as the intervention group, were compared with a control group, who were just given a ‘healthy living’ leaflet on December 1.

All participants were quizzed on how many minutes each week they spent doing moderate-vigorous exercise and how many days they performed muscle-strengthening exercises.

Around half of participants in both the intervention and control group were asked to wear an accelerometer – a gadget that tracks the volume and intensity of physical activity – on their wrist 24 hours a day for the duration of the study.

The intervention group were also asked to rate how much they enjoyed the advent calendar ideas and recount which activity at which intensity they completed each day.

By week three, participants in the trial group were recording 21 more minutes of activity each week.

The intervention group were also recording just over half-a-day more muscle-strengthening exercises per week than the control group. 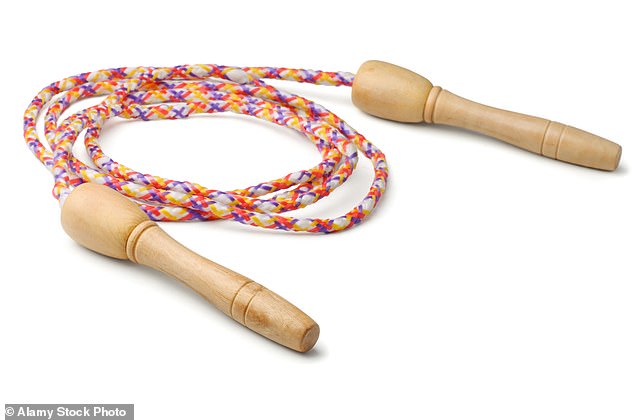 However, the data from the accelerometer showed little difference in the amount of activity time between those doing the advent exercises and those not.

Almost 90 per cent of those selected were women of white ethnicity with an average age of 46 years and 58 per cent of all participants were overweight or living with obesity.

‘The public were interested to engage in a Christmas themed physical activity intervention, which also reduced sedentary time and showed promise for increasing participation in physical activity,’ the authors wrote.

‘Enjoyment of, and adherence to the intervention shows that the public would welcome public health campaigns to help them become more physically active and less sedentary during the holiday season.’

Nearly seven in ten men are now overweight or obese – up from 58 per cent in 1993, public health survey reveals

Trying to lose weight? The doctor might not be much help! Researchers find GPs mostly tell patients to ‘eat less and do more’

Don’t fancy the gym? Don’t worry… just doing ONE MINUTE bursts of activity – like running for the bus – might help you live longer

HOW MUCH EXERCISE YOU NEED

To stay healthy, adults aged 19 to 64 should try to be active daily and should do:

A good rule is that 1 minute of vigorous activity provides the same health benefits as 2 minutes of moderate activity.

One way to do your recommended 150 minutes of weekly physical activity is to do 30 minutes on 5 days every week.

All adults should also break up long periods of sitting with light activity.