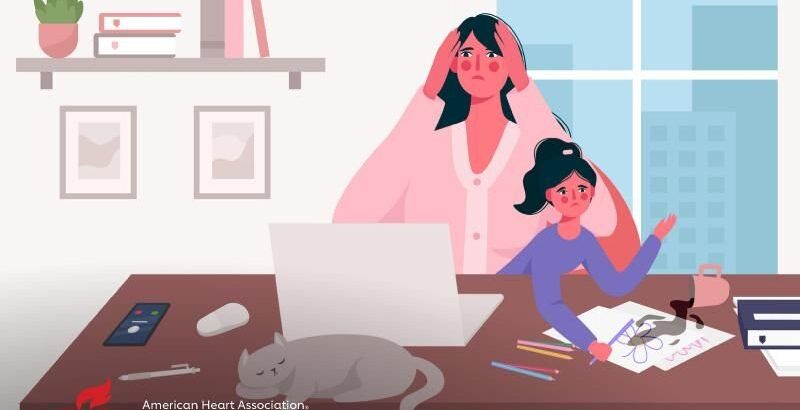 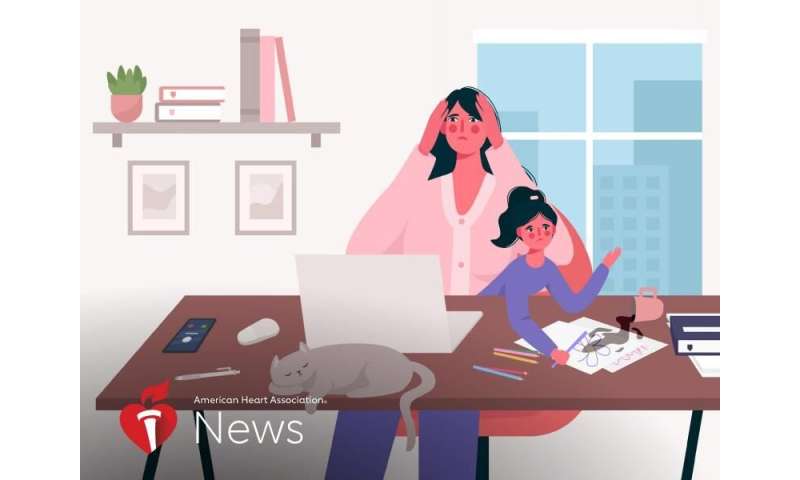 How a woman feels about her roles at home and at work during midlife can affect several factors that influence her heart health, new research shows.

The study, published Dec. 11 in the Journal of the American Heart Association, found women who felt more stressed at their jobs or in their roles as caregivers, mothers and spouses had greater odds of having high blood pressure, being overweight and not eating a healthy diet.

Conversely, those who felt their roles were more rewarding were substantially more likely to be physically active and to not smoke. And that can potentially help their heart health, said lead author Andrea Leigh Stewart. The research was part of her doctoral dissertation at the University of Pittsburgh Graduate School of Public Health.

The study analyzed whether the stress and reward of social roles for women between the ages of 42 and 61 would impact their ability to maintain good heart health, as measured by seven risk factors: body mass index, blood pressure, blood sugar, cholesterol levels, physical activity, diet and smoking. The measures are part of what the American Heart Association calls Life’s Simple 7.

But whether the stress and rewards influenced a woman’s heart-healthy behaviors or if those behaviors affected her feelings about her roles remains unclear.

“Since this was an observational study, we can’t tell which direction this relationship is going,” Stewart said. Even for women with healthy habits, researchers don’t know if less stress and higher satisfaction played a role. “Do women with more rewarding social roles feel more motivated to participate in regular physical activity? Or are the social roles themselves more physically active?”

Many women in midlife would benefit from greater social support and resources to cope with stress, she said. “Women shouldn’t have to take on so much of a burden that their physical health is put at risk.”

Midlife can be a critical time for health, especially in women.

“In addition to physical and mental changes, women may be taking care of both children and aging parents, and their relationships with their spouses and jobs may also be changing,” Stewart said. “What happens to a person during these years has direct consequences for their health and well-being as they progress into old age, when they become more likely to experience physical illness or disability.”

Managing the risk factors represented by those seven health metrics helps maintain more than good heart health – it also may improve brain health and potentially prevent or delay the onset of dementia, according to an AHA advisory in 2017.

“Research over the past several years has shown that what is healthy for the heart is healthy for the brain,” said Hannah Gardener, an epidemiologist and associate scientist in the department of neurology at the University of Miami. Gardener, who was not involved in the new study, has led prior research showing those who scored higher on the heart-healthy behaviors in Life’s Simple 7 exhibited better cognitive performance than those with fewer heart-healthy behaviors.

“This study provides some indication that the high-reward roles in our lives can buffer some of the negative health effects of stress,” Gardener said. “Rewarding roles are a really important avenue to think about because this is something that’s modifiable. For example, we can seek out more rewarding work opportunities that can counterbalance our stress.”

Doing so is more important now than ever, Gardener said. Changes to women’s roles and responsibilities brought on by quarantines and work-at-home arrangements during the COVID-19 pandemic can exacerbate stress, reduce social supports and limit opportunities for physical activity.