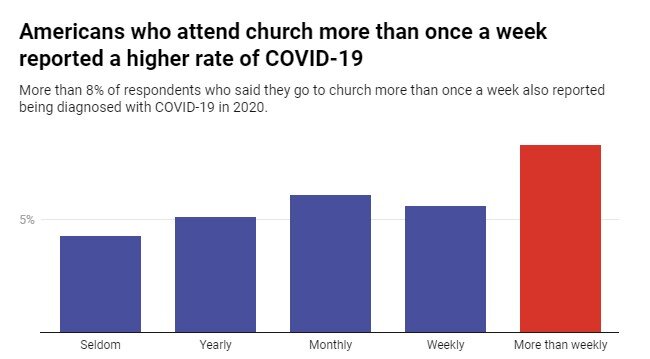 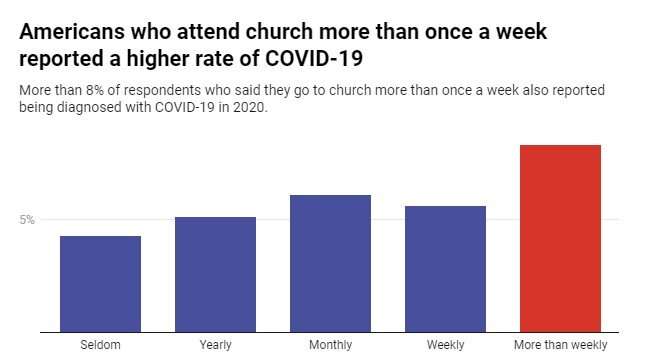 The lockdowns that almost every state went into in order to combat the spread of COVID-19 in the spring of 2020 interrupted nearly every aspect of Americans’ lives. Businesses were shuttered, schools closed and social groups stopped meeting as scientists rushed to understand the pathways through which the virus spread.

One of the most controversial parts of the lockdown strategy in the United States was the closure of churches across the country.

But as an analyst of religious data, I believe the latest evidence appears to point to the clear conclusion that there was a correlation between attending church and the spread of COVID-19.

Public health experts strongly urged churches to cease congregational meetings during the worst parts of the pandemic, noting that religious services were an ideal vector to spread the virus. They pointed to incidents such as that in March 2020 when a choir practice in a church resulted in 87% of attendees being infected with COVID-19, and two members losing their lives.

But the closures were met by a massive backlash among conservative Christians who believed that executive orders closing religious institutions were a clear violation of the First Amendment’s freedom of religion protection. Some places of worship simply ignored state closure orders. As the pandemic wore on and people tired of socially isolating, many churches, mosques and synagogues began to reopen.

Although this was bad news from a public health perspective, it meant social scientists were able to investigate whether churchgoing during the pandemic did indeed lead to a higher level of infection. And in March 2021, the Cooperative Election Study released the results of a survey it fielded in October of 2020. The annual survey of the American public saw a total of 61,000 respondents quizzed over a number of topics. 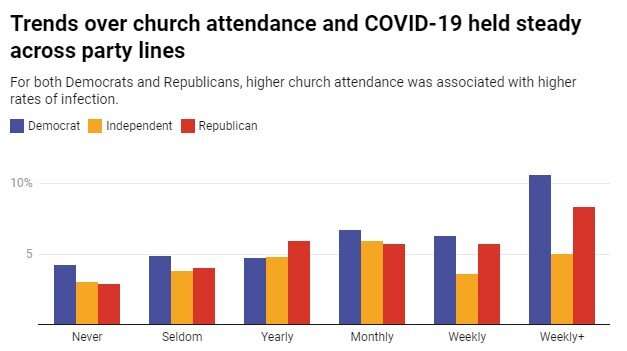 Alongside a question about their level of church attendance, respondents were asked if they had been diagnosed with COVID-19 during the past year. Because of the highly partisan nature of the response to the pandemic and the subsequent lockdowns, the sample was divided into Republicans, Democrats and independents.

The trend in the data is unmistakable—the more frequently someone goes to church, the more likely they were to report that they had been diagnosed with COVID-19 during the first seven months of the pandemic.

It’s worth pointing out that there’s not a large partisan gap in those reporting a positive COVID-19 test—in most cases the share of Democrats and Republicans who had been infected did not deviate by more than one percentage point. There’s ample evidence that Democrats took public health directives more seriously; however, that may have been offset by the fact that Democratic areas tend to have high population density. Urban areas were especially hard-hit in the early days of the pandemic.

The survey results do come with some caveats. It’s important to note that this is a survey of self-reported infections, without any independent verification. A concept in public opinion research called “social desirability bias” highlights the tendency of respondents to lie when they are asked a question that is sensitive in nature. As such, the number of people infected may be an underestimate. Also, the data was compiled before the largest spike in COVID-19 infections in early January 2021, and as a result the data captures only those who got infected earlier in the pandemic.

And while the focus here is on church attendance, it’s logical to conclude that individuals who felt comfortable going back to weekend worship were also more willing to engage in other social activities. It is therefore difficult to isolate whether church attendance was the vector that most likely spread the infection, or if a general disposition toward social gatherings drove up the likelihood of testing positive for COVID-19.