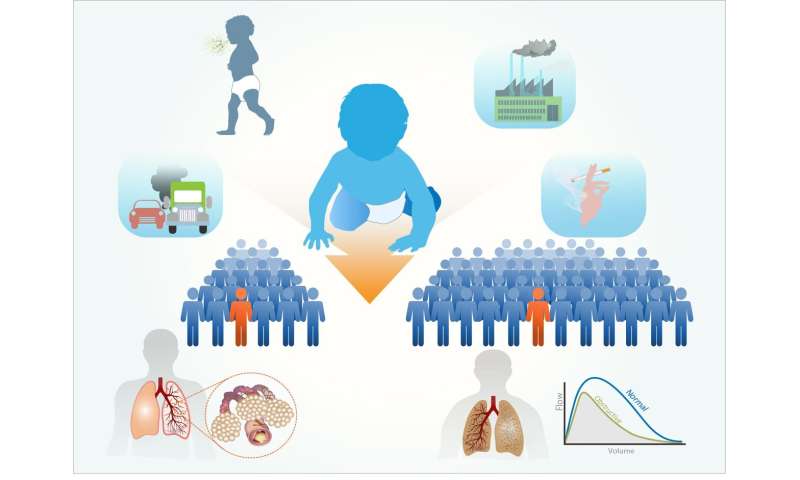 Early-life events, such as the exposure to air pollutants, increase the risk of chronic lung disease in young adulthood, according to new results by researchers at Karolinska Institutet, Sweden, published in the European Respiratory Journal and Thorax. The studies add to the growing evidence that chronic lung disease in adulthood can be traced back to childhood.

Chronic bronchitis and chronic obstructive pulmonary disease (COPD), with the hallmark features of phlegm and irreversible airflow limitation, respectively, are lung diseases known to affect adults with a history of long-term smoking.

“To our surprise, we found the prevalence of chronic bronchitis and irreversible airflow limitation to be rather high (5.5% and 2.0%, respectively), considering the young age of the study participants,” says senior author Erik Melen, professor and pediatrician, Department of Clinical Science and Education, Karolinska Institutet, Sodersjukhuset.

“Those diseases are usually diagnosed in patients older than 50 years of age,” says co-author Anders Linden, professor and pulmonologist, Institute of Environmental Medicine.

In the present studies, the researchers used data from birth up to age 24 years from the follow-up of the Swedish population-based birth cohort BAMSE (Swedish abbreviation for Child (Barn), Allergy, Milieu, Stockholm, Epidemiological), which includes 4,089 participants from the Stockholm area recruited 1994 to 1996.

Analyses performed by Ph.D. student Gang Wang showed that smoking as well as early-life air pollution exposures and childhood asthma are risk factors for chronic bronchitis, whereas breast feeding was identified as a protective factor.

In addition, the early-life risk factors for development of irreversible airflow limitation were recurrent lung infections, asthma, and exposure to air pollution.

“The levels of air pollutants in the current study mainly reflect local emissions from road traffic, which implies that this preventable risk factor may play an important role in the development of chronic lung disease in young adults,” says professor Erik Melen.

Given that air pollution levels in Stockholm are comparatively low by international standards, the current findings are important in a global context. And despite the age of the young participants, active smoking was linked to chronic bronchitis, which underlines the negative health effects from even a limited period of exposure to tobacco smoke.