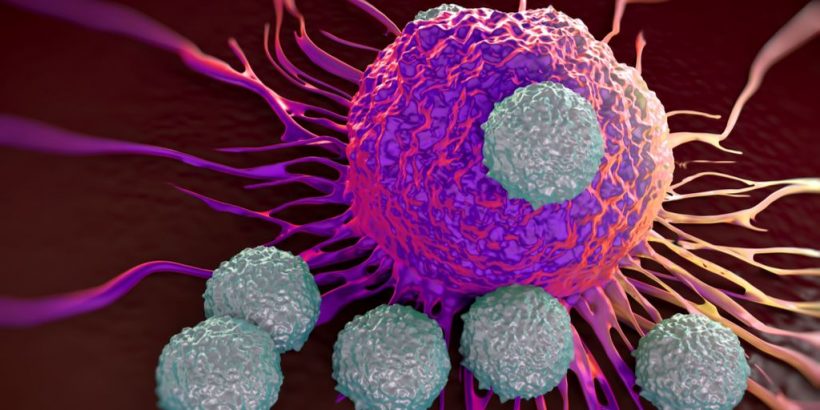 The drug, called BO-112, is in human trials and mimics the structure of a double-stranded RNA molecule, a type of genetic material found in some viruses. Viruses inject their RNA into cells during infection, but cells can spot this viral RNA using specific receptors, and call upon the immune system to intervene when viruses strike.

BO-112 takes advantage of this cellular defense mechanism — once injected inside a tumor, the drug helps to alert the body’s immune system to the cancer’s presence. To hide from the immune system, cancer cells often cloak themselves in disguises, and also stop signals that could alert the body of their location. But when treated with BO-112, tumors throw up red flags that the immune system can spot.

The drug, which has been tested in mice and a a few dozen people, could help amplify the effects of existing cancer treatments designed to rally the immune system, study author Dr. Anusha Kalbasi, an assistant professor of radiation oncology at the University of California, Los Angeles and member of the UCLA Jonsson Cancer Center, told Live Science in an email.

In other words, once BO-112 reveals the location of a tumor, other treatments could more easily target it. “I do think the power of BO-112 is in its ability to enable other immunotherapies to maximize their benefit,” Kalbasi said.

In a new study, published Oct. 14 in the journal Science Translational Medicine, Kalbasi and his colleagues tested BO-112 in lab dish experiments and a mouse model of melanoma, a kind of skin cancer. In a separate clinical trial, published the same day, 44 human patients took BO-112 with and without additional cancer treatments, so researchers could begin to analyze how safe and effective the drug is in people. The early results hint that BO-112 can make tough-to-treat tumors vulnerable to immunotherapy, but the team now needs to confirm that those results hold up in larger groups.

Cancer immunotherapy works by ramping up the body’s immune defense against tumors, but cancer cells use various tricks to resist these attacks.

For instance, an immunotherapy called “adoptive T cell therapy” involves extracting a patient’s immune cells, modifying them to better recognize specific tumors and then reintroducing them to the body, according to a statement. These T cells detect tumors by scanning for specific molecules on their surfaces, called antigens — but some tumors can slow or stop production of these antigens, or prevent them from being displayed on a cell’s surface, thanks to specific genetic mutations, making them effectively invisible to T cells.

In theory, forcing such tumors to build and present antigens on their surface would make them visible to T cells; Kalbasi and his colleagues tested this idea in several mouse studies.

They first engineered mouse tumor cells with mutations that would reduce the number of antigens on their surfaces. In lab dish studies, the mutant tumor cells could not be detected by T cells.

But when the team turned on a gene called NLRC5 in the engineered tumors, the cells generated antigens in spite of the other mutations they’d introduced. Activating this gene made the tumor cells visible to T cells, leaving the cancer open to attack. The same strategy worked when the team moved from lab dishes to actual lab mice; however, for the same approach to work in humans, scientists would need to somehow turn on the NLRC5 gene in a patient’s tumor cells.

To achieve the same result more practically, the team turned to BO-112. Similar to NLRC5, the drug makes cancer cells produce antigens; rather than switching on a specific gene, the drug instead tricks the tumor into reacting as if it’s being infected by a virus.

Without an injection of BO-112, the lab mice’s tumors did not succumb to adoptive T cell therapy, because the T cells could not detect the tumors in the first place. However, after the injection, the T cell treatment suddenly worked, Kalbasi said.

“When we added BO-112, the tumors either decreased in size or stopped growing for a period of time,” he said.

From mice to humans

However, in mice with large tumors, the cancer eventually began to grow again, Kalbasi noted. In mice with small tumors, the combinatory treatment was more effective, as the tumors shrunk more dramatically in size and sometimes disappeared altogether, he said.

To probe whether B0-112 works in human patients as it does in mice, another group of researchers conducted a small clinical trial, sponsored by the pharmaceutical company Highlight Therapeutics. Most of the patients handled the treatment well, although three of the 44 participants experienced a severe reaction, including lung inflammation and a significant drop in platelet levels, which are important for blood clotting, according to the report.

Of the 44 patients, 28 patients who did not experience these side effects received injections of B0-112 along with existing immunotherapy drugs, called nivolumab and pembrolizumab. These treatments “remove the brakes off the body’s T cells” so they can target tumors more effectively, Kalbasi said. In the clinical trial, BO-112 made tumors more sensitive to these two drugs; after eight to 12 weeks of treatment, 10 patients with metastatic cancer reached “stable disease,” meaning their tumors had stopped growing, while the tumors of three other patients actually began to shrink.

That said, “the number of patients is too low to draw a formal conclusion about the responses because the main objective of this first in-human clinical trial was safety,” the authors wrote. However, these early results hint that BO-112 could be an effective strategy to take down tumors that are resistant to immunotherapy, they noted.

“Every cell type has a different capacity to sense double-stranded RNA,” the molecule that BO-112 mimics, Kalbasi added. “So we will be watching carefully to learn what factors in each patient may predict a better response to BO-112,” since some cancers might be more sensitive to the treatment than others. Given that BO-112 is currently administered as a direct injection into tumors, initial trials will likely focus on cancer types with “superficially accessible” tumors, such as melanoma, lymphoma, breast cancer and bladder cancer, said Dr. Joshua Brody, director of the Lymphoma Immunotherapy Program at the Icahn School of Medicine at Mount Sinai, who was not involved in the study.

“The exciting opportunity presented by these two studies, both in the lab and in patients, is that we have medicines that can improve antigen presentation and thereby make immunotherapies — which would otherwise fail — become effective in inducing cancer remissions,” Brody told Live Science in an email.