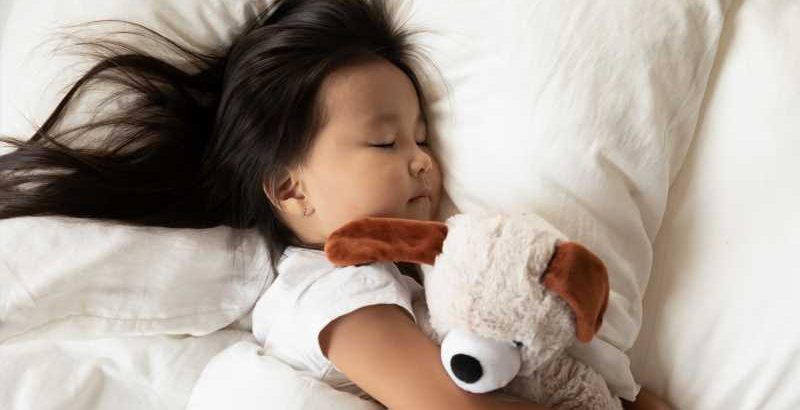 When we think of kids and sleep problems, anyone who’s ever had children will recall, with varying degrees of nostalgia, just how ridiculously hard it is to convince your baby or toddler to close their damn eyes! There’s an NSFW classic children’s book — and yes, there’s a point where these two terms are no longer mutually exclusive, that point being about 38 minutes past bedtime — called Go the F*** to Sleep (here performed in a YouTube video by Samuel L. Jackson, himself a father) that speaks to the sleep-deprived heart of every parent pushed over the edge by kids who never got the memo about how much sleep they supposedly require.

Somehow, we all struggle through this universal ordeal, and finally on one glorious day we even get a full night’s sleep ourselves. Yippee! It’s all downhill from here until the teen years start, right? Ha ha ha … not hardly. Sleep issues aren’t necessarily limited to the first few years of life, and Dr. Lindsay Elton, board-certified pediatric neurologist at Child Neurology Consultants of Austin, says that all the upheaval of the past year seems to be seriously messing with the sleep schedules of school-aged kids.

Why kids are having a hard time getting to sleep

Having their school lives go all topsy-turvy, switching from classroom to online learning and (maybe) back again, is one factor Dr. Elton sees as contributing to the sleep troubles many kids are having these days. She also acknowledges that the uncertainty and fear the pandemic brought to all of us has taken its toll on kids as well. Oh, and now that it’s spring, we’ve got daylight saving time to deal with, too. No matter which side you stand on in the great DST debate, Elton says, “When we ‘spring forward’ an hour, it can impact some kids more than others, particularly younger kids who are used to darkness outside when they shut their eyes.”

As well as pandemic-related and seasonal factors, there may well be some other stress-inducing stuff going on with your kids. Elton mentions anxiety over grades and drama with friends, saying these are issues likely to be faced by teens as well as younger kids. Maybe even more likely … but good luck getting your teens to cooperate with any type of sleep schedule you’d like to set. With the older ones, as well as the little kids, perhaps one of the best things you as a parent can do is try to set a good example by getting enough sleep yourself. As Elton says, “if parents are having a hard time relaxing and sleeping, kids often see this and may also struggle.”

You've got to stick to a schedule

For your kids, and your entire household, Elton says her “first and most important tip is to stick to a regular schedule.” Whether your kids are attending virtual school or are back in a classroom, she says you should have them establish a bedtime routine. This “wind-down ritual,” she says, is something that should be followed every day, even on weekends, although she does allow that it can be relaxed a bit on non-school nights. Still, she advises, it’s ” best not to vary it too much.”

Waking up at the same time every day, Elton says, is also important. Sleeping in, she tells us, “can have a negative impact on falling asleep at night.” Not to mention, she says it’s not really a good look for kids (or grown-ups) to roll out of bed right before those Zoom cameras start rolling. While virtual schooling may lead to kids having more time to sleep, most online classes do track student participation by making students keep their cameras on. Not too many schools go so far as to adopt virtual dress codes, but still, it’s probably not a good idea to get used to attending class in PJs since that will make it all the harder to transition back to non-virtual schooling.

It might help if you wear them out first

Now here’s a tip seemingly right out of the Dog Whisperer’s playbook: Dr. Elton says to “make sure your child is getting enough physical activity during the day to tire them out.” Hey, maybe you could even have your dog and your child wear each other out, kill two birds and all that. (Well, hopefully no actual birds will be harmed in the endeavor.) Elton advises having your child run around outside, go for a bike ride, or take a virtual dance class, although there are a number of other sports and activities you could try if they fit your kid’s personality better such as martial arts, playing catch, or (more multitasking!) even some physically active chores around the house, as long as these are safe and you’re around to supervise.

In fact, getting a little fresh air and exercise is something the whole family could benefit from. Elton suggests you go on family walks or bike rides (assuming the kiddos are still young enough to cooperate without dying of embarrassment) to take advantage of these lighter later evenings we’re now having.

Say no to screen time

The one thing that you should NOT do is to allow the kids to have extra TV or computer time if they’re having trouble sleeping. If your kids are spending all day online in a virtual classroom, Elton says you should definitely take steps to limit their screen time since “they don’t really need any extra screen time at night.” She also points out the fact that blue light from tablets, phones, and computer screens can actually decrease production of the sleep-inducing hormone melatonin. So what activities should the kids engage in after you’ve switched off the electronics, taken away the phones, and pulled the plug on any subsequent protesting? She suggests puzzles, books, art projects or board games — and yes, you may have to get involved yourself in order to facilitate such pursuits.

In fact, the best thing you can do, for your kids and for your own sake, is to put down the remote, turn off your phone, put on your pajamas and be a good ready-for-bed role model. Dr. Elton says that “children look up to parents above anyone else for clues on how to act,” and explains that “if you are relaxed in the evening and ready to settle down, they will be, too.” Or so we can only hope (unless they miss this memo, too)!