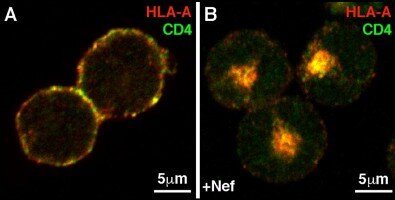 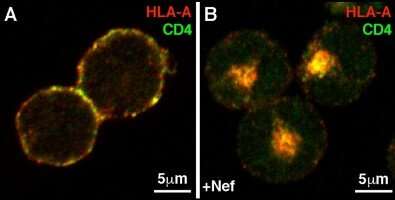 The discovery of a potential “Achilles heel” in Nef, the protein that is crucial to HIV virulence and its capacity to trigger AIDS, paves the way for the development of a new class of drugs against the virus. Researchers have succeeded in demonstrating a structure that binds this protein to another called AP-2 and regulates endocytosis, the process by which cells take in substances such as nutrients or pathogens by engulfing them in a vesicle.

As a result, it is increasingly clear how Nef manages to subvert human cells’ defense mechanisms, enabling HIV to replicate and bringing the symptoms of AIDS closer.

“Researchers have succeeded in obtaining the three-dimensional structure between Nef-CD4 and AP-2, showing the contact surfaces and making possible other studies designed to yield a molecule that occupies this space so as to prevent the effects of the protein from advancing. This ‘photograph’ can serve as the basis for the development of other anti-HIV therapies,” Silva told Agência FAPESP.

With more than 15 years of experience in the field, Silva was invited by NSMB to comment on a study described in the article “Structural basis of CD4 downregulation by HIV-1 Nef,” published in the same issue of the journal and with Yonghwa Kwon, a researcher at the University of Massachusetts (U.S.) as first author.

“Notably, the study by Kwon et al. provides the structural basis for the cooperative assembly of the AP-2–Nef–CD4 tripartite complex and shows that Nef directly bridges CD4 and AP-2. The study also reveals a structural relationship between Nef-mediated downregulation of CD4 and Nef’s antagonism of major histocompatibility complex I (MHC-I)”, the two Brazilians write in their NSMB article.

According to Silva, Nef was known to be crucial to the advancing effects of HIV as AIDS progresses. In addition, the protein can continue to be produced by the organism of patients in treatment or whose viral load remains too small to be detected. “This has been linked to co-morbidities of the infection. Nef is important, and no drugs exist to target it,” he said.

Since the discovery that AIDS is caused by HIV almost 40 years ago, scientists have learned a great deal about the intricate mechanisms by which the virus attacks the immune system, invading and controlling cells, but they have not yet found a way to block Nef directly. They know Nef is a multifunctional protein with a complex mechanism. It is not part of the structure of HIV, but modifies cells to allow the virus to replicate.

Several classes of antiretroviral drugs act on the immune system to block different stages of the HIV multiplication cycle, reduce viral load, and even halt the development of the disease. The most common antiretrovirals include reverse transcriptase inhibitors (nucleoside and non-nucleoside), which disrupt the virus’s use of reverse transcriptase to copy its genetic material and multiply inside defense cells. They also include protease and integrase inhibitors, which hobble viral replication and cell invasion respectively, and entry inhibitors, which stop the virus from invading defense cells by blocking receptors such as CCR5.

All these drugs have led to remarkable progress in terms of reducing AIDS morbidity and mortality, but viral resistance and the drugs’ side effects require a non-stop search for new ways of combating the virus.

Some 38 million people were living with the virus worldwide in 2019, including 1.8 million children aged 14 or less, according to the Joint United Nations Program on HIV and AIDS (UNAIDS), which also says 67% had access to antiretroviral therapy. In Brazil, the Health Ministry’s statistics show about 866,000 people with HIV in 2019.

Silva and his research group at FMRP-USP published a study early this year showing how Nef uses another cellular protein, AP-1G2, and the link between the two pathways. The study was supported by FAPESP.

The group analyzed the effects of Nef on host cell endomembranes, describing the mechanisms by which it uses AP-1G2 and sends CD4 to lysosomes (cell organelles containing enzymes that break down proteins and other molecules). This removes them from the cell surface and helps viral release from cells to spread the infection.

CD4 is the receptor used by HIV to invade cells. If it remains on the cell surface, viral release is blocked: hence its removal by Nef from infected cells. “We pointed to the common point between these two pathways,” Silva said. “In order to send CD4 and MHC-I to lysosomes, Nef hijacks a third cell protein common to both pathways. These findings can help other groups show exactly how Nef interacts with the third protein to identify a novel target, just as was done with AP-2.”