Corneal diseases often require a transplant using corneal tissue from a donor. Now, researchers from Osaka University have developed a novel method that could be used to generate corneal tissue in a lab more easily. In a new study published in Stem Cell Reports, they show how culturing eye cells derived from human induced pluripotent stem cells (hiPSCs) on specific proteins helped purify corneal epithelial cells (iCECs), which they then used to manufacture iCEC sheets that could be used for corneal therapy.

hiPSCs have the potential to produce any cell of the body in any number. However, tissue development using hiPSCs still mimics embryonic development, which means that when hiPSCs are directed to develop into tissues that consist of different cell types, the result is a mix of these cells. Unfortunately, this means that specific parts of organs, like the cornea of the eye, are inherently difficult to make from hiPSCs because the eye consists of corneal, neuronal, retinal and several other cells. Until today, despite the progress in regenerative medicine using hiPSCs, robust methods that enable the production and purification of corneas from hiPSCs have been lacking.

“The cornea is an extremely important part of the eye that helps us see clearly. Unfortunately, damage to the cornea, such as from injury or inflammation, is very difficult to treat,” says corresponding author of the study Ryuhei Hayashi. “The goal of our study was to develop a novel method to generate corneal sheets for therapeutic purposes without expensive equipment such as a cell sorter machine.” 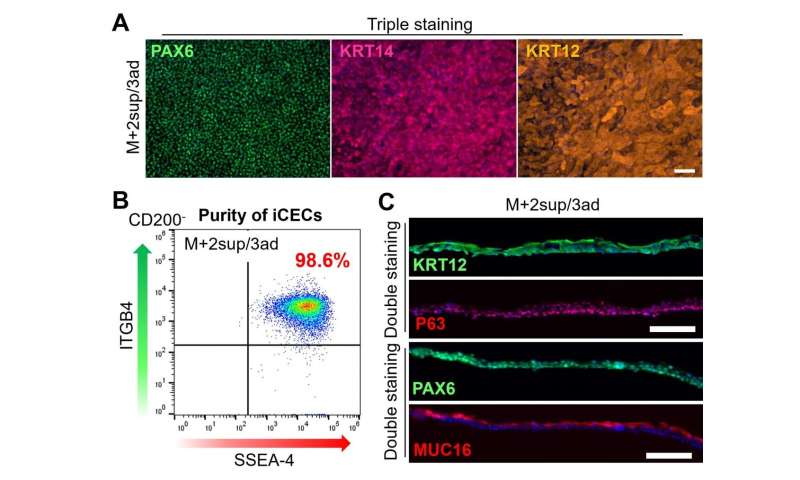 To achieve their goal, the researchers generated eye cells from hiPSCs and cultured them on five different types of the protein laminin, which occur naturally in the human body including the eye. They found that iCECs had a strong propensity to adhere to three of the five, while non-CECs preferred to bind to one specific type of laminin, called LN211. The researchers then found that the difference between the various eye cells originates from differences in the production of integrins, a family of proteins on the surface of cells that links them to proteins outside cells, such as laminins. One of the laminin proteins, called LN332, even promoted the proliferation in addition to the specific binding of iCECs, allowing iCECs to outcompete non-CECs, and thereby increase their purity.

“While LN332 appeared to be the optimal substrate for iCEC growth, it was not sufficient to achieve the high purity that is required for the production of cell sheets for corneal therapy,” says lead author of the study Shun Shibata.

The researchers thus turned to magnetic-activated cell sorting (MACS), which allows the separation of cell populations using a magnetic field after coating specific surface proteins of cells with antibodies that carry magnetic nanoparticles. By first removing cells that produce the protein CD200 and then selecting for the cells that produce the cell surface marker SSEA-4 among the CD200- population, the researchers were able to separate most iCECs from non-CECs. To achieve high purity in iCECs, the researchers cultured these cells on LN221 and then on LN332 substrates, to further remove non-CECs and enable the adhesion and growth of iCECs only, respectively. The result was a highly purified corneal cell sheet.