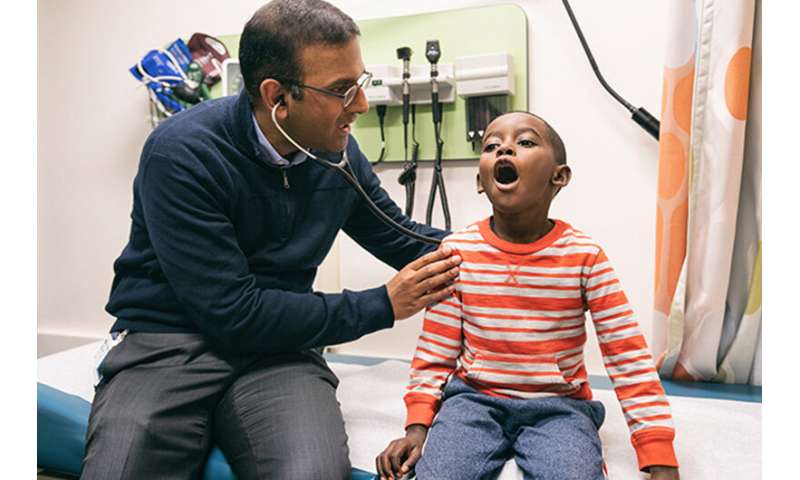 When Lamarcus Jean visits the Hematology Clinic at Dana-Farber/Boston Children’s Cancer and Blood Disorders Center, he makes himself right at home. The 6-year-old, whom his mom, Stephanie, describes as “wise beyond his years,” has been a patient here since he was born.

Lamarcus has sickle cell disease, an inherited blood disorder caused by a mutation in the gene for hemoglobin, the oxygen-carrying molecule in red blood cells. Before birth, almost all hemoglobin is expressed in a fetal form. After birth, the production of fetal hemoglobin shuts off and adult hemoglobin turns on. In children with sickle cell, that’s when the mutation manifests. The altered hemoglobin, called hemoglobin S, distorts red blood cells into a crescent or sickle shape. The misshapen cells get stuck inside small blood vessels, preventing them from delivering oxygen to the rest of the body. For a child with sickle cell, this manifests as severe, debilitating pain episodes, and ultimately leads to life-threatening complications, including severe infections, strokes, and organ failure.

Every year, approximately 300,000 babies are born with sickle cell disease. When Stephanie learned that Lamarcus had tested positive for sickle cell, she couldn’t stop crying. “Then I thought, okay, instead of crying, I now have to put myself in a situation to deal with it, and since that day, I’ve never cried again.”

Stephanie credits her resilience to Lamarcus’s doctor of six years, Vijay Sankaran, MD, Ph.D., interim chief of the Division of Hematology/Oncology and a physician at Dana-Farber/Boston Children’s. Sankaran devotes his research to investigating the mechanisms that cause blood disorders, such as sickle cell, the ultimate goal being the development of new, more effective therapies.

“Dr. Sankaran gives me strength to deal with sickle cell,” Stephanie says. “He gives me hope.”

It had been known through long-standing clinical observations that increased fetal hemoglobin levels could ameliorate symptoms. This finding led Platt and Nathan to develop hydroxyurea, a drug that stimulates the production of fetal hemoglobin, even in adult red blood cells. It is now part of the standard of care.

“There had been work performed by a group in Chicago in which administration of a drug called 5-azacytidine could stimulate fetal hemoglobin production in red blood cells,” says Nathan. “We knew fetal hemoglobin in sufficient amounts prevents sickle hemoglobin from causing the shape change and blood vessel obstruction of sickle cell anemia, but we thought 5-azacytidine would be much too toxic. So we decided to try the much safer hydroxyurea. It worked!”

Nathan and Platt laid the groundwork for Sankaran. He worked alongside Stuart Orkin, MD, to identify a gene called BCL11A, which controls what is termed “the fetal-to-adult hemoglobin switch,” occurring in everyone shortly after birth. BCL11A codes for a transcription factor that dampens the production of fetal hemoglobin. Turning down BCL11A leads to more fetal hemoglobin, which reduces the proportion of sickled cells and reduces symptoms in patients. The discovery paved the way for future treatments, including an ongoing gene therapy clinical trial that involves silencing BCL11A and has produced promising results.

Still, questions remain unanswered. The upstream mechanisms underlying the developmental expression of BCL11A and hemoglobin switching have not been entirely understood.

“Unless we understand all of the parts that are involved, I would argue we don’t necessarily know the best pathway to treatment,” says Sankaran.

His recent study published in Nature Genetics, led by Anindita Basak in Sankaran’s laboratory, revealed that in earlier stages of blood development, a protein called LIN28B acts as an upstream regulator, binding directly to the messenger RNA encoding BCL11A, preventing its translation to a protein.

“What we’re showing here is how the switch is regulated,” says Sankaran, who is the senior author on the paper. “It turns out, there is one factor—LIN28B—that binds to the BCL11A transcript, preventing the protein from being produced earlier in development. LIN28B goes away in adulthood, and therefore, BCL11A can be well produced.”

Hydroxyurea is currently keeping most of Lamarcus’s symptoms at bay; however, some patients, including Lamarcus, continue to have symptoms. His mom, Stephanie, knows he could potentially develop more problems as he grows older. For now, only a hematopoietic stem cell transplant is curative. She’s optimistic there will be other options, such as gene therapy or small molecule drugs, in the near future.