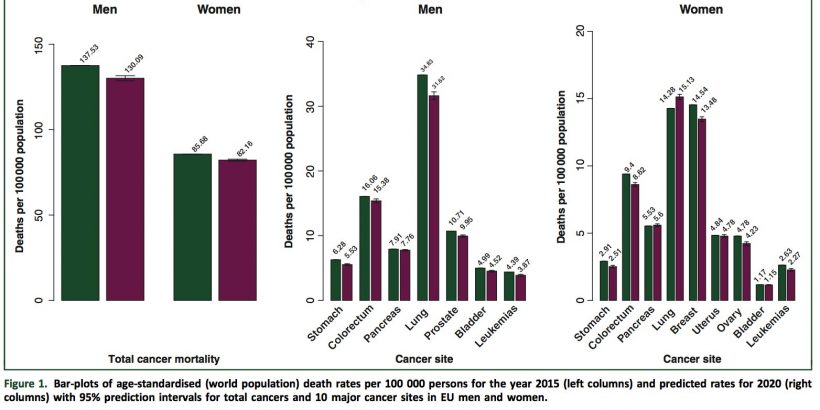 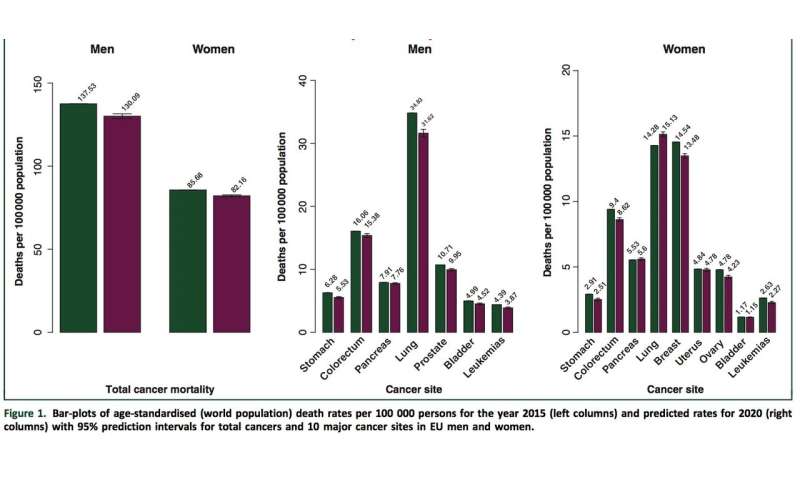 Death rates from prostate cancer are predicted to fall in 2020 in the EU, largely due to better diagnosis and treatment, according to new research published in the leading cancer journal Annals of Oncology today.

In the latest predictions for cancer deaths in the EU for 2020, researchers led by Carlo La Vecchia (MD), Professor at the School of Medicine, University of Milan (Italy), show that since 2015 there has been a 7% reduction in deaths from prostate cancer, with a predicted age standardised rate for 2020 of 10 men per 100,000 of the population. A total of 78,800 men are predicted to die from the disease this year.

Poland is the only EU country where death rates from prostate cancer are not falling; instead the researchers predict a rise of 18% since 2015: an age standardised death rate of 15 per 100,000 men, with 6,100 men predicted die from it by the end of 2020.

Prof La Vecchia said: “Poland started with the lowest death rate from prostate cancer between 1970 to 1974, but then rates increased up to the year 2000, stabilised for a while and then rose again up to 2020. So Polish prostate cancer death rates are now the highest predicted. This is difficult to explain. It is possible that the recent relatively high rates are due to delayed adoption of modern diagnosis and treatment.

“Across the EU as a whole, the key message from these prostate cancer death rates is to adopt up-to-date surgery and radiotherapy techniques, together with newer androgen deprivation therapy. This may have a relevant impact on prostate cancer mortality even in the absence of cure, since a proportion of elderly men may survive long enough to die from other causes. The prostate specific antigen test, PSA, may also play a role, but it is difficult to quantify this at present. It has major impact on incidence, but an unquantified impact on death rates.”

The researchers looked at cancer death rates in the EU 28 Member States as a whole and also in the six largest countries—France, Germany, Italy, Poland, Spain and the UK—for all cancers, and, individually, for stomach, intestines, pancreas, lung, breast, uterus (including cervix), ovary, prostate, bladder and leukaemias for men and women. This is the tenth consecutive year the researchers have published these predictions. Prof La Vecchia and his colleagues collected data on deaths from the World Health Organization from 1970 to 2016. 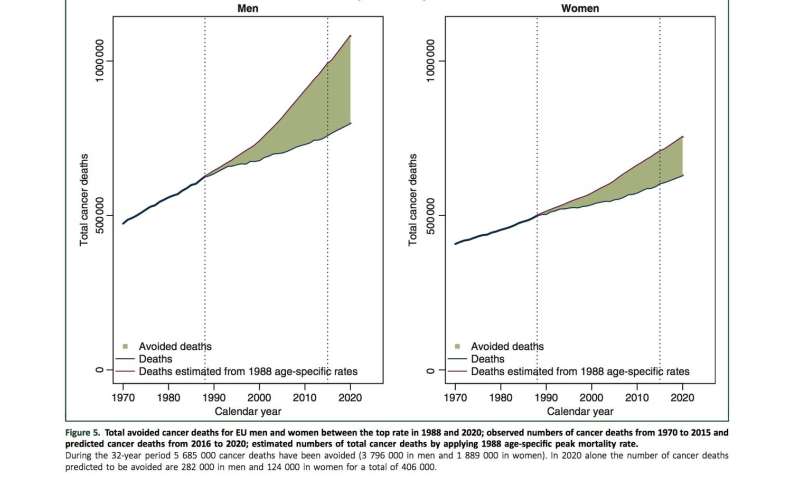 Prof La Vecchia said: “Overall cancer death rates in Poland are predicted to be 28% higher than the EU average for men and 21% for women. This gap between central-eastern and western Europe is due to patterns in tobacco consumption, but also to a slower adoption of up-to-date prevention, disease management and treatment.

“In the EU as a whole, cancer death rates for men are falling. More than half of this is due to declines in death rates from tobacco-related cancers. These include not only lung cancer, which accounts for over a third of the decline, but also cancers such as head and neck and bladder cancers. In other words, it is due to fewer European men smoking, which started a few decades ago.”

Prof La Vecchia said: “Death rates from lung cancer in women have been increasing persistently in the EU over the past decade, although the rate of increase is now slowing. Between 2010 and 2020 female lung cancer rates in the EU increased from about 13 to over 15 per 100,000. In the absence of effective intervention on tobacco smoking in women, the overall rate will probably reach 16 or 17 per 100,000 in 2030 and only level off in the subsequent decade.”

Co-author, Dr. Eva Negri, a senior researcher at the University of Milan, said: “There are some differences between countries in female lung cancer death rates. For instance, French and Spanish rates are rising more than British or Italian ones. This again reflects smoking habits in different generations of women in various countries and underlines the importance of convincing women to give up smoking, not only in Poland or the UK, which now have the highest rates, but also in France or Spain, which still have relatively low overall rates. This will help to control the persistent epidemic of lung and other tobacco-related cancers in women.

“Tobacco remains the main cause of cancer mortality in Europe, accounting for around 20% of total predicted cancer deaths; the marked decline in the deaths in men compared to women reflects the differences in past smoking habits between the two sexes.”