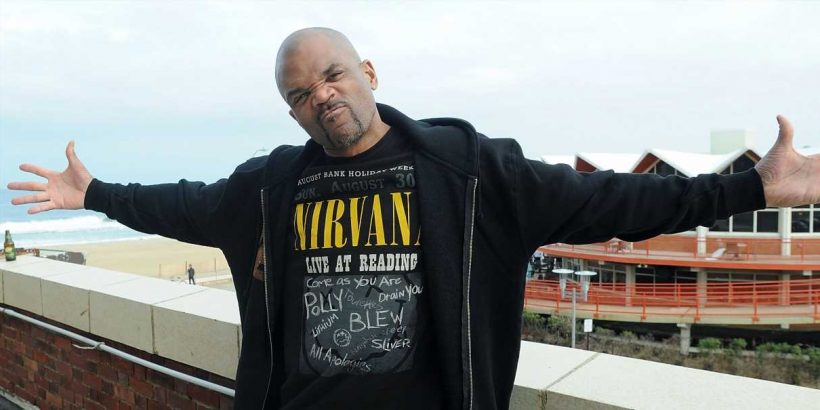 May is Mental Health Awareness Month. For too long, men have been silent about mental health and it’s literally killing us. We can change that. Our Healthy Mind, Healthy Body series shines a light on mental health issues that everyone should be talking about. Darryl “D.M.C” McDaniels is a rapper, comic book artist, and founding member of pioneering hip-hop trio Run-DMC. Here, he shares how he overcame a battle with addiction and discovered the life-saving values of therapy.

It wasn’t until I went to seek help that I finally understood I had a problem.

For 25 or so years, everybody told me to go to rehab. But I was the functional alcoholic. I was never late. I never got in a car accident. I never threw up on people, never got into a public intoxication incident. There was never tragedy on the outside. Those are the signs that tell world you’re messed up. But I always said, “Man, I can handle this.”

Once Run-DMC hit the big time — when “Walk This Way” dropped and the Adidas deal happened — these funny feelings came over me. When I first started writing rhymes, I wasn’t trying to write hit records. I was a shy Catholic school kid, just writing to express myself. As soon as a company said, “Yo D, we need a hit record,” my thought pattern completely changed. I felt the only way I could get rid of the pressure was to drink. Some people drink one 40 of Olde English, or maybe two or three, in a day. I was drinking a case a day. Literally. I put a refrigerator in the back of my truck so I didn’t have to stop at the grocery store to buy them.

“Any time I felt something I considered abnormal, I just reached for the bottle.”

Then Jam Master Jay got shot and killed in 2001. I never accepted or faced my emotions about that. That New Year’s Eve, DJ Hurricane of The Beastie Boys invited me to Las Vegas — one of the worst places I possibly could have gone. I was sitting in the suite of the hotel, and I had just drank a fifth of Rémy Martin, by myself. I sat there in this room alone, drinking a bottle that maybe 30 people could share. I looked at the bottle, and something in my head said, “D, you can’t get higher than this. If you keep drinking, you’re gonna kill yourself.”

But I still didn’t truly realize it was a “problem” until my first day of rehab, after my wife told me, “You are killing yourself. You are commiting suicide.”

I was admitted to the intake room, and to my left was a guy in a straight jacket. To my right, there was another person just knocked out. It started reminding me of One Flew Over the Cuckoo’s Nest. I went to my first session and they had the “11 Characteristics of an Addictive Personality” written up on the blackboard. I realized I had all of them.

Therapy is the most gangster thing anybody can do for themselves. Going to therapy is the most powerful move that you can make that will help you heal, solve, or alleviate the stress and struggles of the battles with depression.

In therapy, I was diagnosed with suppressing my feelings.

During my first session, my therapist asked, “Darryl, during your entire journey with Run-DMC, was there ever a time Run or Jay or anybody at the record label did anything to make you angry?”

And I confidently said, “No.”

My therapist took his glasses off. You know how therapists have the little notepad with the pen? He politely put the notepad down, looked me straight in my eyes, and said, “You’re a goddamn, motherfuckin’ liar.” Those words went to my soul. I immediately opened up.

It’s not a selfish thing to express your feelings. I realized — and I know this is going to rhyme, but I am one of the greatest rappers ever — if you don’t admit how you feel, whether good or bad, you will never heal.

“If you don’t admit how you feel, whether good or bad, you will never heal.”

I found out I was adopted at 35 years old. Imagine that. Run and Jay would say, “Suck it up.” They couldn’t understand how it feels to find out at age 35, out of nowhere — all my cousins knew, all my teachers knew, all the doctors knew, all the nuns knew — that you were adopted.

So for people to look at me and say, “You’re DMC. You’re lifestyles of the rich and the famous. That shit don’t mean nothing.” All of a sudden everyone who was close to me became the enemy, and I isolated myself.

That’s one of the worst things you can do if you have a mental issue. When I was traveling with Run-DMC, I would ask the manager, “What hotel you in?” If they said the Hilton, I would go to the Marriott. Then I’m at the Marriott alone, sitting there thinking I’m the only person in the world going through this. The next step after that is thinking about drinking the poison, about shooting yourself in the head, about jumping off the roof.

Even if you have no idea what it means to be anorexic, or have anxiety, or be an alcoholic or a drug addict, or have OCD, the coolest thing you can say is, “If there is anything I can do to help you, please let me know.” If you remove the guilt and shame, you remove the pain. I tell everyone, “You never have to be ashamed of the way you feel.”

Hip hop is about keeping it real. Telling the truth. Once I started telling my story, I realized I was doing a lot of interviews for the black community. Because a lot of black men — men in general — fight the stigma that admitting you have a problem is a sign of weakness. A lot of men, they’re fronting. They’re hiding the truth. They lie. They take substances. They act tough. They’re violent. They talk a lot to hide the fact that they are going through something.

Admitting that you have a mental health issue is not being soft. It’s the hardest, most powerful thing you can do for yourself. I want people to be courageous enough to say, “If I have to go away for three months to get right, that’s what I have to do.”

“Admitting that you have a mental health issue is not being soft.”

A couple of weeks ago, Kevin Love came out and said he was hurting. He had to leave for a while. Everyone said he was soft, he was a punk, he ain’t rough like Lebron. But he was brave enough to realize motherfuckers, I have anxiety. I had a panic attack.

I want people to get help. I did it. I’m not a genius. I’m not a rocket scientist. All I am is a living, breathing example that anyone can defeat whatever it is that they’re battling.

Most of all, I want to keep talking about it. When you break your calf, you talk about it until the cast is off and the healing is done. I want people to talk about mental health in the same way.

This essay is based on an interview conducted by Vinnie Mancuso. It has been edited for length and clarity.

Share your own moment of #HowIGotHelp and let your voice inspire other men. For more information on how to get help for anxiety, depression, and other mental health issues, please check out our list of resources. If you would like to locate treatment services in your area, call the Substance Abuse and Mental Health Services Administration Treatment Referral Helpline at 1-800-662-HELP (4357).