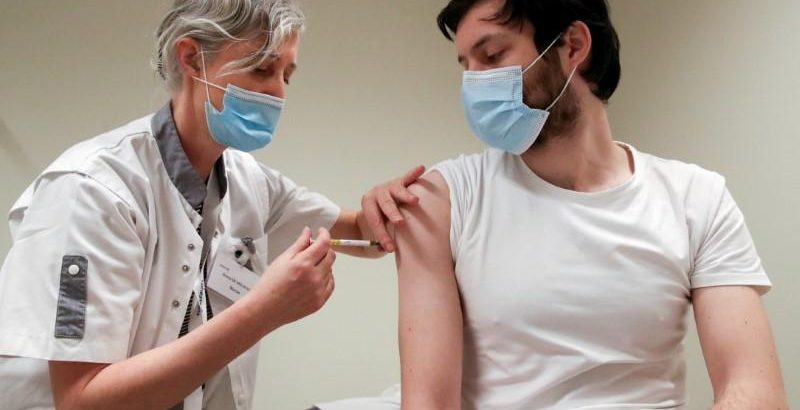 (Reuters) – CureVac shares fell by as much as 52% on Thursday after the German biotech’s COVID-19 vaccine proved only 47% effective in an initial trial, denting investor confidence in its ability to take on established rivals.

The disappointing efficacy of the shot known as CVnCoV emerged from an interim analysis in a study of about 40,000 volunteers in Europe and Latin America, with CureVac saying on Wednesday that new variants had proved a headwind.

Late-stage trials of BioNTech/Pfizer and Moderna vaccines, which like CureVac’s are based on mRNA technology, had efficacy rates of well above 90% but took place when the original version of the coronavirus was dominant.

Data on their products have, however, so far suggested only somewhat weaker protection against new variants.

“This could cast doubt on competitiveness of its mRNA platform,” Jefferies said in a research note on CureVac’s study.

CureVac shares were down 44% at 1005 GMT in Germany, trading at their lowest in more than seven months and wiping more than 6 billion euros off the company’s market value.

Public health representatives across the globe are pushing for a fast deployment of available vaccines to counter highly contagious mutations of COVID-19 such as the Delta variant that first emerged in India.

The Jefferies analyst said CureVac’s readout was in stark contrast with results announced by Novavax this week, showing that its experimental COVID-19 vaccine was more than 90% effective, including against a variety of concerning variants of the coronavirus in a U.S.-based clinical trial.

Yet, CureVac’s efficacy rate was similar to Sinovac’s vaccine which the World Health Organization said was 51% effective in preventing symptomatic disease, taking it one step closer to be deployed in low and middle income countries under the COVAX platform. The UN body gave the go ahead for the shot earlier this month.

Franz-Werner Haas, CureVac’s chief executive, said in an interview with the New York Times that the company still plans to apply for approval from the European Medicines Agency (EMA).

Under CureVac’s only major supply deal for the product tested in the trial, the European Union in November secured up to 405 million doses of the vaccine, of which 180 million are optional.

In a bet on CureVac’s technology, Britain in February placed a conditional 50 million dose order on yet-to-be-developed vaccines that build on the product tested in the trial.

After the interim results, the European Commission said it would need to wait for final results and the assessment of the EU drugs regulator before taking any step, a spokeswoman for the EU executive told a news conference on Thursday.