Researchers have measured the galectin-3 levels in the sera of hospitalized patients with coronavirus disease 2019 (COVID-19). They found initial high levels indicate patients will become severely ill, suggesting it could be used as a predictor of severe disease. 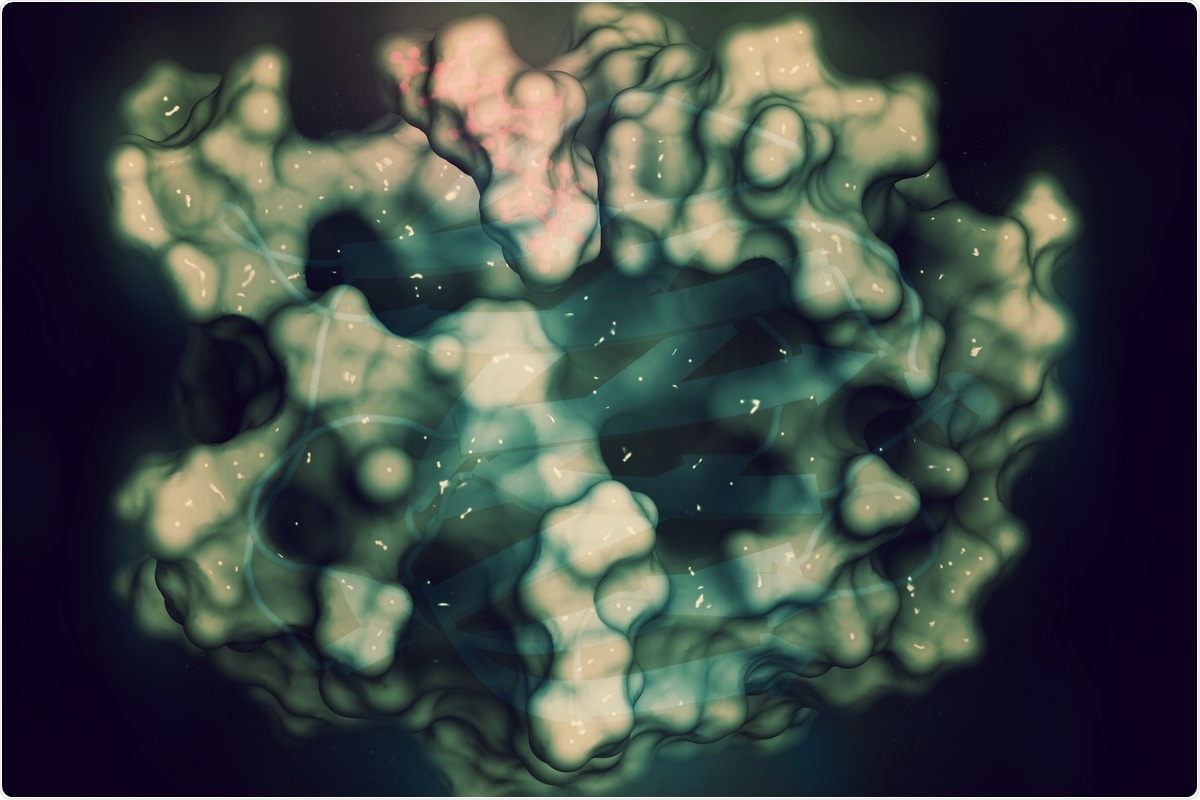 As the COVID-19 pandemic continues to claim more lives, with many patients becoming severely ill, biomarkers that can predict disease severity will help better treat such patients. Patients with severe disease show a hyperinflammatory response with high levels of cytokines and chemokines. This can lead to acute respiratory distress syndrome (ARDS), failure of multiple organs, and ultimately death.

Infection by the severe acute respiratory syndrome coronavirus 2 (SARS-CoV-2), the causative agent of the COVID-19 pandemic, is reported to not only result in acute inflammation in the lungs but has also been associated with pulmonary fibrosis in some severe instances.

Galectin-3, a 29-35 kDa b-galactoside binding lectin, promotes the release of interleukin 6 (IL-6), tumor necrosis factor a (TNF-a), and other cytokines. High levels of galectin-3 are known to promote neutrophil infiltration and increase viral infection by increasing inflammatory response in hosts. Galectin-3 is also a potential biomarker for the diagnosis or prognosis of inflammatory and fibrotic diseases.

Since inflammation and fibrosis are usually seen in severely ill COVID-19 patients, and circulating galectin-3 levels have been associated with disease severity in ARDS patients, it may serve as a biomarker for predicting the course of COVID-19.

To investigate this possibility, researchers studied the levels of serum galectin-3 in 156 COVID-19 patients. They hypothesized that levels of galectin-3 upon hospital admission could identify patients who would become severely ill. They published their results in a paper on the medRxiv* preprint server.

Of the patients the team studied, 68.6% were males and in 94 patients, the lungs were affected more than 50%. About 35% of the patients, mostly male, were severely ill, and 21 patients died. In the critical patients, the researchers found that inflammatory markers, ferritin, D-dimer, and C-reactive protein were high at hospital admission. 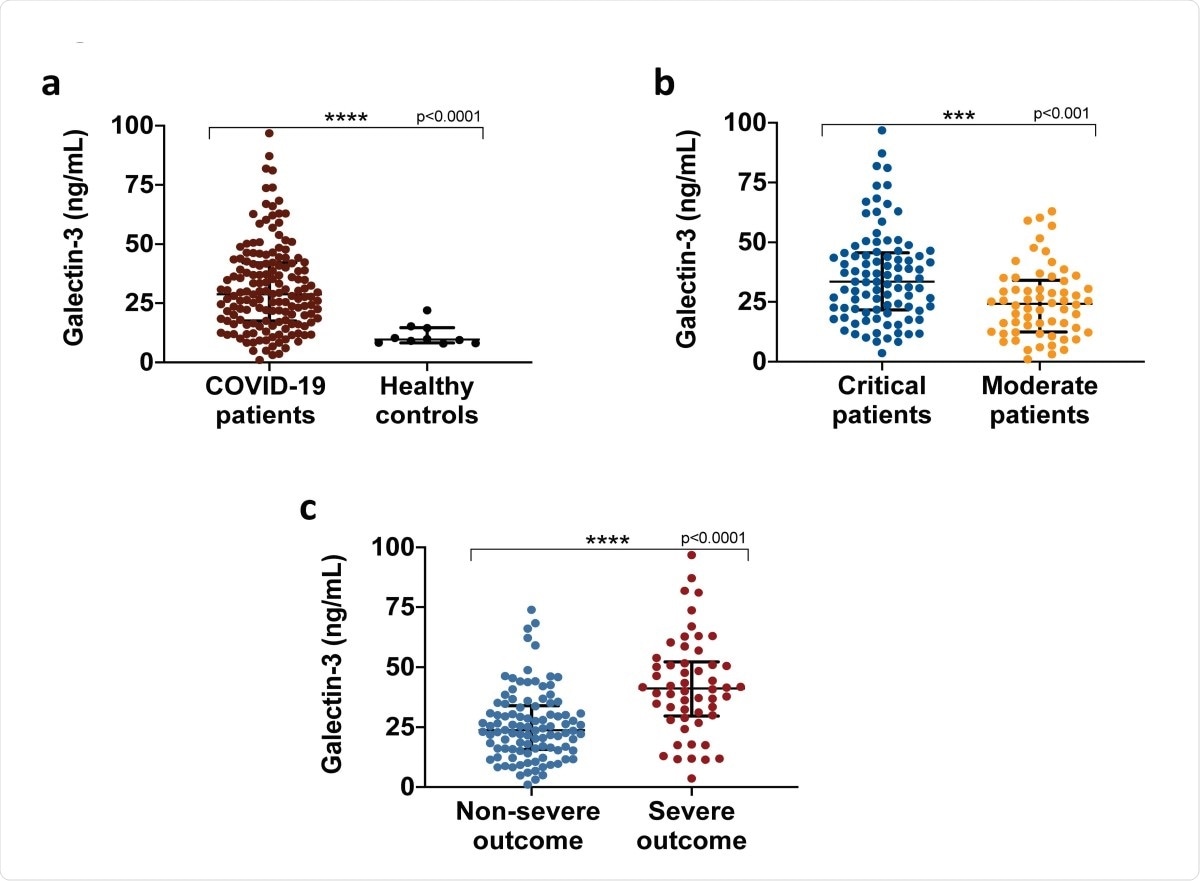 Based on their results, the authors write that galectin-3 levels of more than 30.99 ng/mL indicate severe disease. Thus, the galectin-3 levels were not only able to predict adverse outcomes but also identify patients who were moderately ill initially but became severely ill later on.

The authors also found higher initial levels of C-reactive protein in patients who were severely ill or progressed to severe disease. These proteins are a biomarker for acute inflammation. However, galectin-3 levels were better predictors of severe disease, especially in moderately ill patients.

Since ARDS is characterized by lung damage caused by severe inflammation, the high levels of galectin-3 may indicate it plays a role in the physiological processes of the disease. Galectin-3 plays an important role in inflammatory response syndrome by activating the release of cytokines, which have been implicated in the death of COVID-19 patients. “Galectin-3 was not only able to classify a severe outcome in critical patients, but, more importantly, was able to identify severe outcomes in moderate patients,” write the authors.

Galectin-3 is also associated with neutrophils, immune cells that play a critical role in activating the immune systems against infections. Neutrophils also play a role in cytokine release, associated with severe disease.

The authors also found a negative correlation between galectin-3 levels and albumin levels. Albumin is another inflammatory biomarker whose production is decreased with higher levels of IL-6. When C-reactive protein, albumin, and galectin-3 were used together, COVID-19 severity predictions were very accurate.

The authors propose testing for galectin-3 also, along with C-reactive protein and albumin, during the initial panel of tests of COVID-19 patients, helping identify patients who will progress to severe disease. However, further testing on different populations and larger sample sizes will be needed before a definitive recommendation is made. Galectin-3 inhibition is also reported to reduce IL-6 and TNF-a in vitro, so may also be a potential target for reducing the hyperinflammatory phase and lung fibrosis in COVID-19.

Lakshmi Supriya got her BSc in Industrial Chemistry from IIT Kharagpur (India) and a Ph.D. in Polymer Science and Engineering from Virginia Tech (USA).