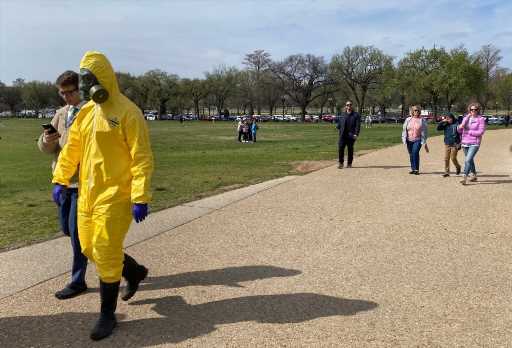 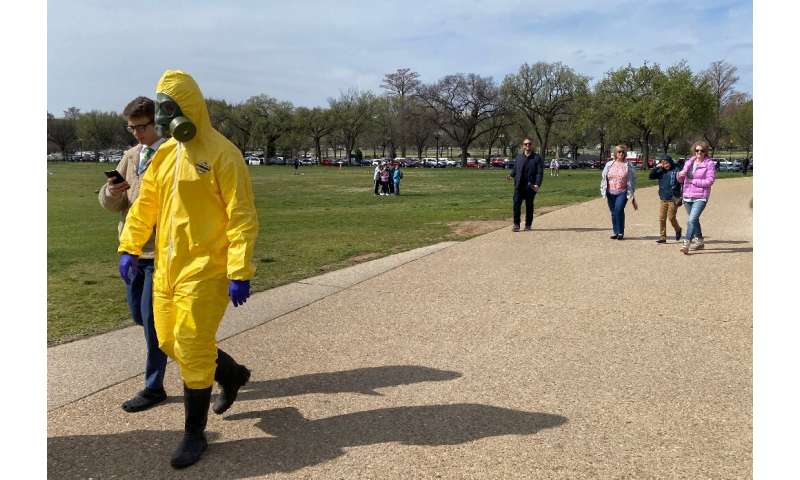 Coronavirus deaths soared across the United States and Europe on Sunday despite heightened restrictions as hospitals scrambled to find ventilators.

Germany and Greece became the latest countries to tighten curtailments on movement as the fast-spreading virus kept nearly a billion people indoors and intensified fears of a global recession unlike any experienced for decades.

“This is going to be the greatest crisis domestically since the Great Depression,” of the 1930s, said Mayor Bill de Blasio as he warned New York’s hospitals were days away from running out of essential equipment.

The virus—which has upended lives, closing businesses and schools—has killed more than 13,000 people and infected over 300,000 around the world, with the epicentre now in Europe after shifting from China where the illness first emerged late last year.

The US recorded more than 100 deaths in 24 hours to take its toll to 390, according to a running tally by Johns Hopkins University.

Italy’s world-topping toll from the pandemic approached 5,500 Sunday as the Mediterranean country reported another 651 deaths, a day after it overtook China for the highest number of fatalities.

Greece imposed a national lockdown and Germany banned public gatherings of more than two people. Chancellor Angela Merkel began quarantining at home after being treated by a doctor who has since tested positive for the virus.

But lockdown measures in Italy have done little to stem the outbreak and New Yorkers were finding it difficult to put a stop to fun in the city that never sleeps on a spring weekend. 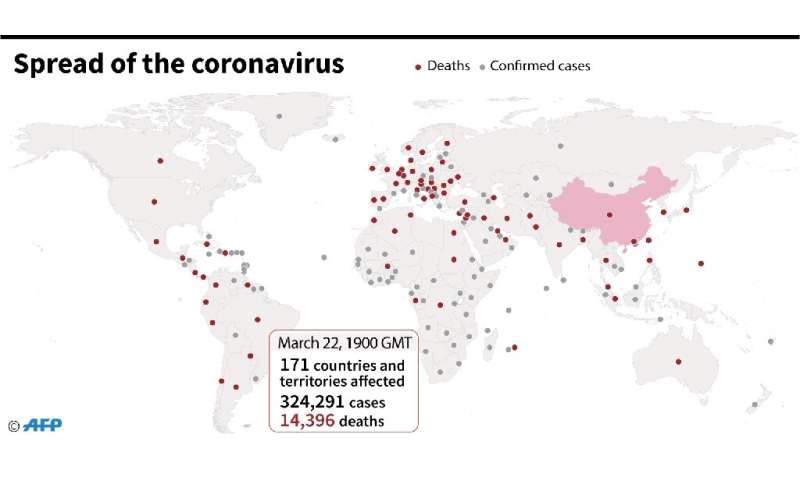 “I don’t know what they’re not understanding,” said Governor Andrew Cuomo, complaining that parks were still full of people not respecting social-distancing orders.

“It’s insensitive, it’s arrogant, it’s self-destructive, it’s disrespectful to other people and it has to stop. This is not a joke,” he pleaded.

Police patrolled the deserted streets of Rome, while checks were carried out on beaches after local officials complained people were defying orders to catch some time in the sun.

In his weekly prayer, streamed online to avoid attracting crowds, the Pope urged all Italians to follow isolation measures.

“Let us do the things that the government asks us to do for the good of us all,” Pope Francis said.

Spain’s prime minister said he would ask parliament to extend a 15-day state of emergency, which bars people from leaving home unless absolutely essential, until April 11.

The country recorded close to 400 new fatalities on Sunday, bringing the total to 1,720, suggesting the lockdown was failing to be effective. Opera star Placido Domingo said he had tested positive. 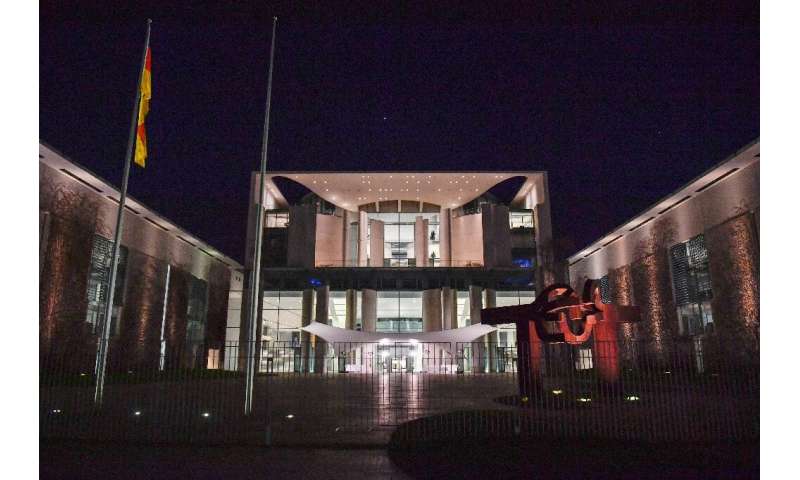 Residents across France—where the death toll jumped to 562—remained shut in their homes. A curfew was imposed in some regions and the mayor of Paris called for even more drastic confinement measures in a city under lockdown.

“We are only a matter of weeks—two or three—behind Italy,” he said.

Pubs, restaurants, theatres and leisure centres are already closed across the country, and the government said it could give police, public health and immigration officers extra powers to contain the outbreak.

In the US, where Rand Paul became the first US senator to test positive, Congress and the government were working on agreeing twin packages to inject more than $5 trillion into the economy.

Several European countries have already announced their own stimulus packages to stave off economic collapse. 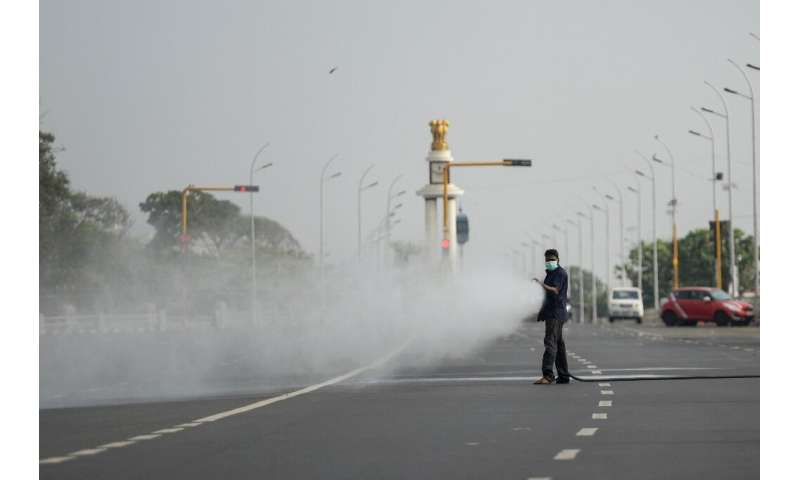 More than a third of Americans are under various phases of lockdown, including in New York, Chicago and Los Angeles.

Mayor de Blasio said New York was 10 days away from widespread shortages of ventilators. He pleaded with President Donald Trump to mobilise the military to increase production and distribution.

As the pandemic overwhelms hospitals, doctors across the world are having to quickly prioritize patients based on their chances of survival, inflicting a huge moral burden.

“We go into medicine to heal people. Not to make choices about who can live,” said Philippe Devos, an anaesthesiologist in Liege, Belgium.

While the number of cases in China—which reported its first local infection in four days on Sunday—has slumped dramatically since the crisis began, there are fears in Asia of “imported” cases from other hotspots like Europe.

Thailand reported its highest daily rise in cases, taking its total to nearly 600, while Singapore, Hong Kong and Malaysia have also reported a spike after numbers had plateaued earlier.

Australia has shut its borders to foreigners and non-residents and Pakistan has suspended international flights. 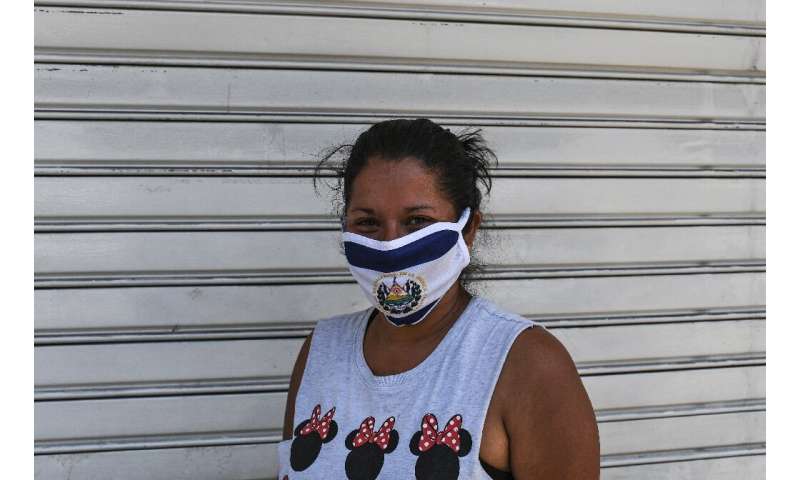 Across Africa, where healthcare systems are limited and social distancing measures are difficult in crowded cities, the new coronavirus has infected more than 1,200.

The Middle East also remains on high alert, where Iran—which suffered a major outbreak—reported 129 deaths on Sunday. It has so far refused to restrict movements.

While the elderly and those with pre-existing medical conditions are the hardest hit by the virus, the WHO has warned that young people are also vulnerable.