Scientists warned in 2017 that a SARS-like virus could escape a lab set up that year in Wuhan, China, to study some of the most dangerous pathogens in the world.

Now, a SARS-like coronavirus has infected more than 600 there, spread to at least 10 other countries and killed 18 in Wuhan and nearby provinces.

China installed the first of a planned five to seven biolabs designed for maximum safety in Wuhan in 2017, for the purpose of studying the most high-risk pathogens, including the Ebola and the SARS viruses.

Tim Trevan, a Maryland biosafety consultant, told Nature that year, when the lab was on the cusp of opening, that he worried that China’s culture could make the institute unsafe because ‘structures where everyone feels free to speak up and openness of information are important.’

In fact, the SARS virus had ‘escaped’ multiple times from a lab in Beijing, according to the Nature article.

The Wuhan National Biosafety Laboratory is located about 20 miles away from the Huanan Seafood Market and some have wondered if the outbreak’s epicenter is coincidental, but the scientific community currently believes that the virus mutated through and jumped to people through animal-human contact at the market.

But, ‘at this point there’s no reason to harbor suspicions’ that the facility had anything to do with the outbreak, besides being responsible for the crucial genome sequencing that lets doctors diagnose it, Rutgers University microbiologist Dr Richard Ebright told DailyMail.com. 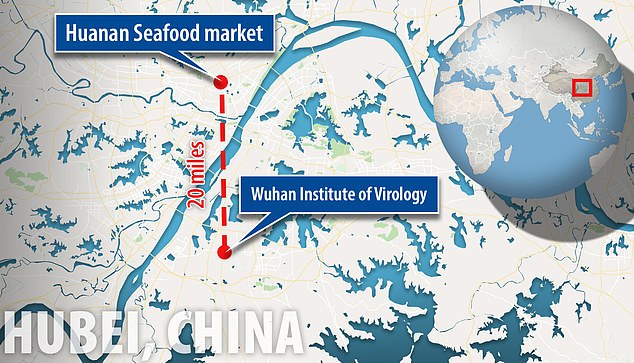 China’s highest-grade lab for studying viruses is located in Wuhan, the same city at the center of the current coronavirus outbreak

The Wuhan National Biosafety Laboratory, housed at the Wuhan Institute of Virology, was set up in the hopes of helping China contribute research on the world’s most dangerous viruses.

Constructed in 2015, the lab was still undergoing safety testing, but near ready to open in 2017.

It was the first ever lab in the country designed to meet biosafetey-level-4 (BSL-4) standards – the highest biohazard level, meaning that it would be qualified to handle the most dangerous pathogens.

BSL-4 labs have to be equipped with airtight hazmat suits or special ‘cabinet’ work spaces that confine viruses and bacteria that can be transmitted through the air to sealed boxes that scientists reach into using attached high-grade gloves.

There are about 54 BSL-4 labs worldwide.

Upon opening, it planned to first take up a project that required only BSL-3 precautions to be in place: a tickborne virus that causes Crimean-Congo hemorrhagic fever.

It’s as highly fatal disease, killing 10 to 40 percent of those it infects.

SARS, too, is a BSL-3 virus. According to Nature’s interview with the lab’s director, Yuan Zhimin, the Wuhan National Biosafety Laboratory planned to study the SARS virus.

In January 2018, the lab was operational ‘for global experiments on BSL-4 pathogens,’ wrote Guizhen Wu in the journal Biosafety and Health.

After a SARS virus escaped in a ‘leak’ from another lab in 2004, Chinese officials worked to improve safety, but also to expand the country’s capacity to continue to study the very viruses its lab had let out. 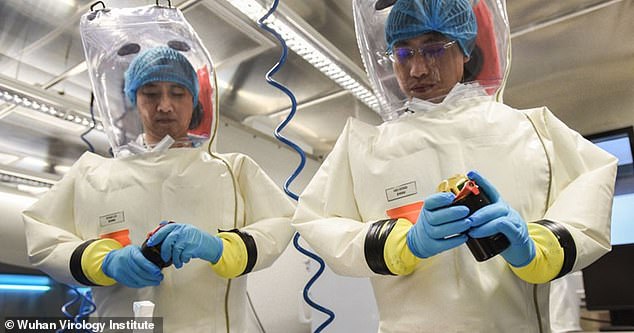 Scientists at the Wuhan Virology Institute wear high-grade hazmat suits. On the institute’s grounds is the Wuhan Biosafety Laboratory, which is designated to study the most dangerous pathogens, including viruses like Ebola and SARS 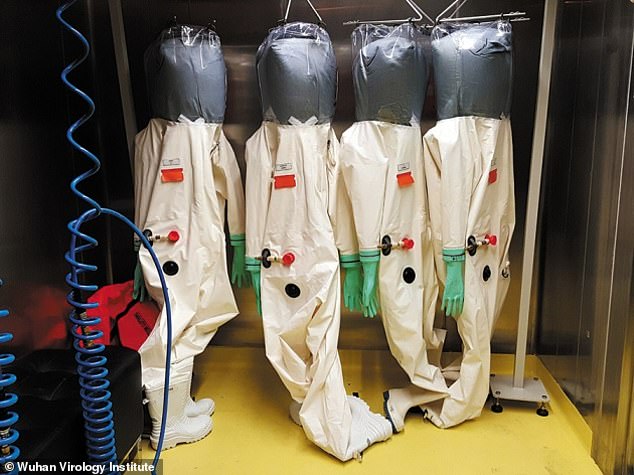 These Hazmat suits are intended to protect scientists from easily transmitted viruses, like those that can be caught by breathing in, while working at the Wuhan lab

‘After a laboratory leak incident of SARS in 2004, the former Ministry of Health of China initiated the construction of preservation laboratories for high-level pathogens such as SARS, coronavirus, and pandemic influenza virus,’ wrote Guizhen Wu.

It’s not clear what or where those labs were.

The Wuhan lab is also equipped for animal research.

In 2017, the scientists who spoke to Nature acknowledge the opportunity this presents for the development of vaccines and treatments.

Regulations for animal research – especially that conducted on primates – are much looser in China than in the US and other Western countries, meaning these studies are less costly and face fewer barriers that could limit or slow them.

But that was also cause for concern for Trevan.

Studying the behavior of a virus like 209-nCoV and developing treatments or vaccines for it requires infecting these research monkeys, an important step before human testing.

Monkeys are unpredictable though, warned Ebright.

‘They can run, they can scratch they can bite,’ he said, and the viruses they carry would go where their feet, nails and teeth do.

THE NEW CORONAVIRUS IN CHINA TIMELINE

The WHO China Country Office was informed of cases of pneumonia of unknown cause detected in Wuhan City, Hubei Province of China. Around 27 suspected cases were reported in the month of December.

A seafood market was closed for environmental sanitation and disinfection after being closely linked with the patients.

A Chinese woman in Thailand was the first confirmed case of the mystery virus outside of China. The 61-year-old was quarantined on January 8, but has since returned home in a stable condition after having treatment, the Thai Health Ministry said.

The WHO told hospitals around the globe to prepare, in the ‘possible’ event of the infection spreading.

A man in Tokyo is confirmed to have tested positive for the disease after travelling to the Chinese city of Wuhan.

A second death, a 69-year-old man, was reported by officials at Wuhan Municipal Health Commission. He died in the early hours of January 15 at Jinyintan Hospital in Wuhan city having first been admitted to hospital on December 31.

Thailand announces it has detected a second case. The 74-year-old woman had been quarantined since her arrival on Monday. She lived in Wuhan.

Scientists at Imperial College London fear up to 4,500 patients in Wuhan may have caught the virus. A report said if cases are this high, substantial human to human transmission can’t be ruled out.

Four more cases have been identified in a viral pneumonia outbreak in Wuhan, bringing the total to 45 in the city alone.

China reported 17 more cases of pneumonia caused by a new coronavirus strain had been found in Wuhan. It takes the city’s total to 62, including two deaths, and the global total to 65.

All of the cases to this point involved people either living in Wuhan or who have travelled to the city.

Public Health England and Britain’s chief medical officer said they would not be introducing screenings at UK airports at this point.

China reported a sharp rise in the number of people infected with a new coronavirus over the weekend, including 136 more cases in Wuhan city, taking its total to 198.

The outbreak spread across China; five cases in Beijing, 14 in Guangdong, and one in Shanghai.

South Korea confirmed its first case – a 35-year-old woman arriving at Seoul’s Incheon airport tested positive for the virus. She had been in Wuhan the week prior. This took the total cases outside China to four.

Details were not revealed about the third death.

Chinese President Xi Jinping said saving lives was a top priority, adding that information about the disease was being released in a ‘timely manner’.

The WHO announced it would hold an emergency meeting to debate whether the outbreak should be declared an international public health emergency.

On this day, the death toll rose to six.

The fourth person had died on January 19, an 89-year-old man who developed symptoms, including severe breathing difficulties, on January 13.

Authorities also said 15 medical workers in the city were included in the confirmed cases. There is also one other suspected case. Of the infected staff, one was in critical condition.

The first American – a man in his 30s – was confirmed to have the new coronavirus outside Seattle in Washington state.

Washington officials said he was in ‘good’ condition but was in isolation and being closely monitored at Providence Regional Medical Center – Everett, near his home in Snahomish County.

The CDC announced that all passengers arriving to Wuhan from direct or connecting flights would be re-ticketed and rerouted through the three airports with screening already set up and two additional airports, Chicago O’Hare and Hartsfield-Jackson Atlanta.

A Brisbane man is being held in isolation over fears he may have contracted the deadly coronavirus while in Wuhan.

Queensland’s chief medical officer Dr Jeannette Young confirmed the man has been tested for the illness when he presented with flu-like symptoms after returning home. The results are still unknown.

Australia began screening passengers arriving from a Chinese city in a bid to stop the spread, Brendan Murphy, the chief medical officer for the Australian government, said.

The Philippines also announced that it was investigating its first potential case of the coronavirus. A five-year-old child arrived in the country on January 12 from Wuhan and has since been hospitalised with flu symptoms.

Taiwan reported its first confirmed case. Health officials announced the woman, thought to be around 50 years old, worked in Wuhan. She is currently in hospital receiving treatment, according to local media.

Stock markets in China and Hong Kong dipped today amid fears tourists will refrain from travelling. But shares in firms which make surgical face masks have surged.