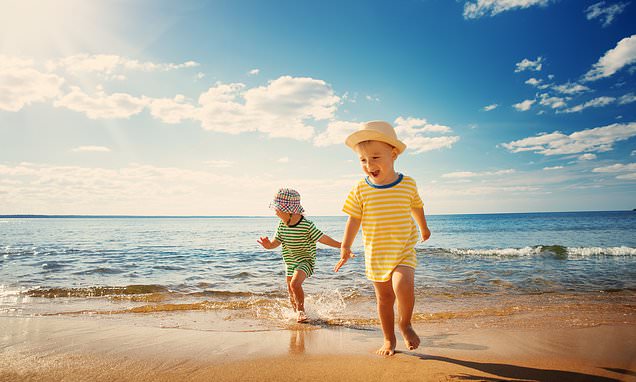 Oh we DO like to be beside the seaside! Children who visit the beach grow up to be happier adults, study claims

Giving children memorable experiences of the seaside might make them happier as adults, a study claims.

Such spaces include lakes and rivers, as well as beaches. 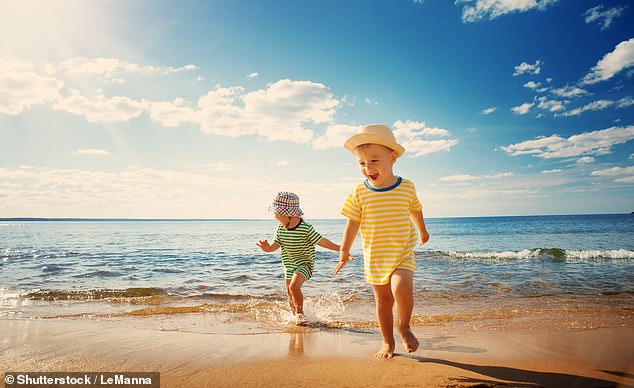 Children who went on beach and lake holidays grow up to be happier adults, a study claims

Children who enjoy spending time in nature end up being outdoorsy as adults, the researchers believe.

This has ‘beneficial consequences’ for their wellbeing, according to the team.

A plethora of studies have shown that people who spend more time outdoors are happier and less stressed.

Being in nature usually means exercising more, which has been shown to improve mental health because it causes the body to release ‘feel-good’ hormones.

The study asked more than 15,000 people across 18 countries about their childhood holidays and asked them to rate their happiness as adults.

Countries where participants came from included the UK, the US and Australia.

Questions included ones about their current well-being, how regularly they visit different natural environments and why they go to them, including if their childhood experiences influenced them.

Participants were also asked how accessible blue spaces were to them as children, whether their parents were comfortable with them playing there and how often they visited them.

The trend was seen across all the 18 countries studied, including land-locked Czech Republic.

This indicated spending times at lakes or rivers was just as beneficial as being by the sea, the researchers said.

‘Our findings suggest that building familiarity and confidence in and around blue spaces during childhood may stimulate an inherent joy of nature,’ she added.

‘[It may also] encourage people to seek out recreational nature experiences, with beneficial consequences for adult mental health.’

The study, which used data collected between 2017 and 2018, was published in the Journal of Environmental Psychology.

Revealed: The benefits of nature

Child Mind Institute, a US charity devoted to children’s mental health, has drawn up a list of befits of getting kids outdoors more.

It says kids who play outside are smarter, happier, more attentive, and less anxious than kids who spend more time indoors.

‘While it’s unclear how exactly the cognitive functioning and mood improvements occur, there are a few things we do know about why nature is good for kids’ minds.’

The way that kids play in nature has a lot less structure than most types of indoor play.

There are infinite ways to interact with outdoor environments, from the backyard to the park to the local hiking trail or lake, and letting your child choose how he treats nature means he has the power to control his own actions.

It promotes creativity and imagination

This unstructured style of play also allows kids to interact meaningfully with their surroundings.

They can think more freely, design their own activities, and approach the world in inventive ways.

Living things die if mistreated or not taken care of properly, and entrusting a child to take care of the living parts of their environment means they’ll learn what happens when they forget to water a plant, or pull a flower out by its roots.

Nature may seem less stimulating than your son’s violent video game, but in reality, it activates more senses—you can see, hear, smell, and touch outdoor environments.

‘As the young spend less and less of their lives in natural surroundings, their senses narrow,’ said Richard Louv, author of the book Last Child in the Woods: Saving Our Children From Nature-Deficit Disorder.

‘This reduces the richness of human experience.

It gets kids moving

Most ways of interacting with nature involve more exercise than sitting on the couch.

Your kid doesn’t have to be joining the local soccer team or riding a bike through the park—even a walk will get her blood pumping.

Not only is exercise good for kids’ bodies, but it seems to make them more focused, which is especially beneficial for kids with ADHD.

It makes them think

Louv said nature creates a unique sense of wonder for kids that no other environment can provide.

The phenomena that occur naturally in backyards and parks everyday make kids ask questions about the earth and the life that it supports.

It reduces stress and fatigue

According to the Attention Restoration Theory, urban environments require what’s called directed attention, which forces us to ignore distractions and exhausts our brains.

In natural environments, we practice an effortless type of attention known as soft fascination that creates feelings of pleasure, not fatigue.