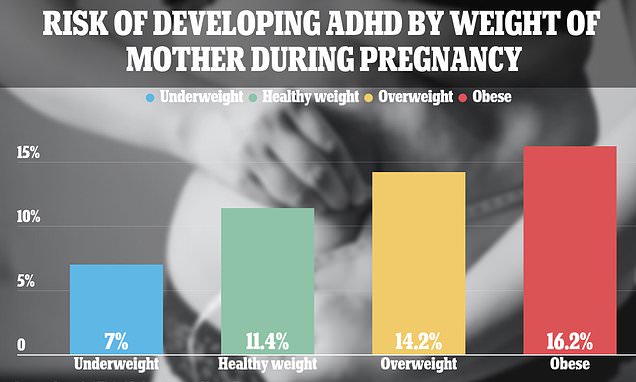 Children born from obese pregnant women are TWICE as likely to suffer from ADHD, study finds

Expecting mothers who are obese are putting their children at an increased risk of suffering from attention deficit hyperactive disorder (ADHD), a new study finds.

Researchers at MútuaTerrassa University Hospital in Barcelona, Spain, found that women who suffer obesity – whether related to pregnancy-induced diabetes or because of rapid weight gain early in the first trimester – are more likely to have a child with ADHD.

Children born from obese mothers were twice as likely to develop ADHD. Researchers note that nearly one third of women are obese at their first doctors visit related to the pregnancy, and half of women who suffer from gestational diabetes.

Rates of ADHD among American youth have increased in recent years. While no studies have directly tied that phenomena to the nation’s growing obesity crisis, it is possible that the two situations are linked. 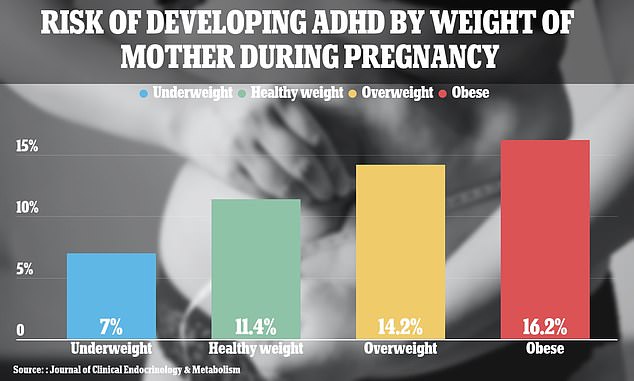 ‘Our study found pregnant women with obesity and gestational diabetes had children with long-term mental health disorders such as ADHD,’ Veronica Perea, a researcher who also works at the hospital, said.

‘We did not find this association when these women gained a healthy amount of weight during pregnancy.’

The researchers, who published their findings Thursday in the Journal of Clinical Endocrinology & Metabolism, gathered data from 1,036 women who were born with gestational diabetes.

The common condition occurs when a woman suffers a form of type 1 diabetes while they are pregnant.

It is caused by the body being unable to produce enough insulin for the body while the mother is expecting.

Symptoms typically appear at an early age and become more noticeable as a child grows. These can also include:

Most cases are diagnosed between six and 12 years old. Adults can also suffer, but there is less research into this.

ADHD’s exact cause is unclear but is thought to involve genetic mutations that affect a person’s brain function and structure.

Premature babies and those with epilepsy or brain damage are more at risk.

A combination of medication and therapy is usually recommended to relieve symptoms and make day-to-day life easier.

Women who were obese before pregnancy, or already pre-diabetic, are at an increased risk of developing the condition.

In a majority of cases, the diabetes is temporary and resolves shortly after the mother gives birth.

Of the study population, 13 percent of the children born from mothers with the form of diabetes were eventually diagnosed with ADHD.

Those born from mothers who were overweight had a 14.2 percent chance of developing the condition, and 16.2 percent of children of obese mothers would eventually develop the condition.

They were classified based on the standard body mass index scale, where a score of 18 or under is underweight, 19 to 24 is a healthy weight, 25 to 20 is overweight and 31 and higher is obese.

Women who gained excess weight at the start of their pregnancy bore the risk, while mothers whose weight increased the typical amount for someone of their size did not see any increased risk.

Researchers are not sure of the mechanism, but urge doctors to make sure expecting mothers know how to manage their weight during pregnancy.

‘It’s important for clinicians to counsel their patients on the importance of healthy weight gain during pregnancy,’ Perea said.

Rates of ADHD are surging in the U.S., and while there are multiple theories why, there is no concrete explanation.

The number of American children suffering from the condition jumped 30 percent from 2011 to 2019. Rates of it are also much higher in the U.S. that they are in peer nations when adjusting for population.

Some fear that this could be a result of a world with increased distractions triggering the disease in more children.

Others think the inflated rate in the U.S. could be a result of over-medicalization, and that some children who are just more energetic at school are being saddled with a diagnosis for a condition they do not have.

Experts have also linked ADHD to America’s unusually high obesity rate, though the mechanism for why obese mothers are more likely to produce children suffering from the disease has not yet been determined.

The Centers for Disease Control and Prevention (CDC) reports that more than 40 percent of American adults are suffering from obesity, and more than 70 percent are overweight.