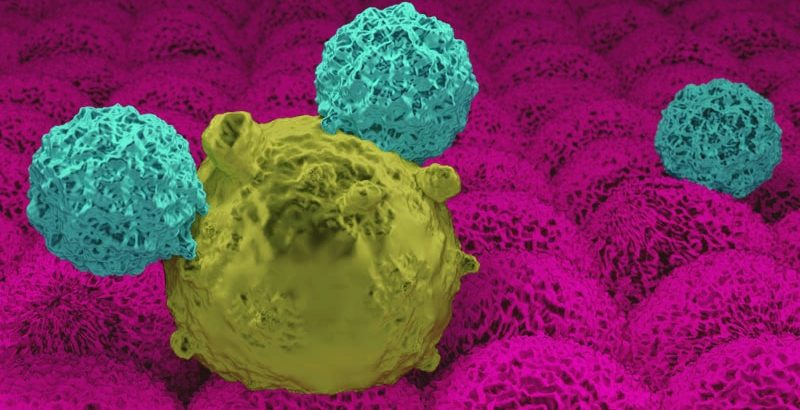 Patients undergoing chimeric antigen receptor (CAR) T-cell therapy who develop potentially serious neurotoxicity from the therapy show elevated plasma levels of neurofilament light chain (NfL) prior to the treatment, suggesting a possibly important predictor of risk for the side effect.

“This is the first study to show NfL levels are elevated even before CAR T treatment is given,” first author Omar H. Butt, MD, PhD, of the Siteman Cancer Center at Barnes-Jewish Hospital and Washington University in St. Louis, said in an interview.

“While unlikely to be the sole driver of [the neurotoxicity], neural injury reflected by NfL may aid in identifying a high-risk subset of patients undergoing cellular therapy,” the authors concluded in the study, published in JAMA Oncology.

CAR T-cell therapy has gained favor for virtually revolutionizing the treatment of some leukemias and lymphomas, however, as many as 40%-60% of patients develop the neurotoxicity side effect, called immune effector cell–associated neurotoxicity syndrome (ICANS), which, though usually low grade, in more severe cases can cause substantial morbidity and even mortality.

Hence, “the early identification of patients at risk for ICANS is critical for preemptive management,” the authors noted.

NfL, an established marker of neuroaxonal injury in neurodegenerative diseases including multiple sclerosis and Alzheimer’s disease, has been shown in previous studies to be elevated following the development of ICANS and up to 5 days prior to its peak symptoms.

Of those developing any-grade ICANS, baseline elevations of NfL prior to the CAR T-cell treatment, were significantly higher, compared with those who did not develop ICANs (mean 87.6 pg/mL vs. 29.4 pg/mL, P < .001), with no significant differences between the low-grade (1 and 2) and higher-grade (3 or higher) ICANS groups.

Notably, baseline NfL levels were associated with ICANS severity, but did not correlate with other factors including demographic, oncologic history, nononcologic neurologic history, or history of exposure to neurotoxic therapies.

However, Butt added, “it is important to note that our study was insufficiently powered to examine those relationships in earnest. Therefore, [a correlation between NfL and those factors] remains possible,” he said.

The elevated NfL levels observed prior to the development of ICANS remained high across the study’s seven time points, up to day 30 post infusion.

Interest in NfL Levels on the Rise

NfL assessment is currently only clinically validated in amyotrophic lateral sclerosis, where it is used to assess neuroaxonal health and integrity. However, testing is available as interest and evidence of NfL’s potential role in other settings grows.

Meanwhile, Butt and associates are themselves developing an assay to predict the development of ICANS, which will likely include NfL, if the role is validated in further studies.

“Future studies will explore validating NfL for ICANS and additional indications,” he said.

ICANS symptoms can range from headaches and confusion to seizures or strokes in more severe cases.

The current gold standard for treatment includes early intervention with high-dose steroids and careful monitoring, but there is reluctance to use such therapies because of concerns about their blunting the anticancer effects of the CAR T cells.

Importantly, if validated, elevations in NfL could signal the need for more precautionary measures with CAR T-cell therapy, Butt noted.

“Our data suggests patients with high NfL levels at baseline would benefit most from perhaps closer monitoring with frequent checks and possible early intervention at the first sign of symptoms, a period of time when it may be hard to distinguish ICANS from other causes of confusion, such as delirium,” he explained.

Commenting on the study, Sattva S. Neelapu, MD, a professor and deputy chair of the department of lymphoma and myeloma at the University of Texas MD Anderson Cancer Center, Houston, agreed that the findings have potentially important implications.

“I think this is a very intriguing and novel finding that needs to be investigated further prospectively in a larger cohort and across different CAR T products in patients with lymphoma, leukemia, and myeloma,” Neelapu said in an interview.

The NfL elevations observed even before CAR T-cell therapy among those who went on to develop ICANS are notable, he added.

“This is the surprising finding in the study,” Neelapu said. “It raises the question whether neurologic injury is caused by prior therapies that these patients received or whether it is an age-related phenomenon, as we do see higher incidence and severity of ICANS in older patients or some other mechanisms.”

A key caveat, however, is that even if a risk is identified, options to prevent ICANS are currently limited, Neelapu noted.

“I think it is too early to implement this into clinical practice,” he said. In addition to needing further validation, “assessing NfL levels would be useful when there is an effective prophylactic or therapeutic strategy – both of which also need to be investigated.”

Butt and colleagues are developing a clinical assay for ICANS and reported a provisional patent pending on the use of plasma NfL as a predictive biomarker for ICANS. The study received support from the Washington University in St. Louis, the Paula and Rodger O. Riney Fund, the Daniel J. Brennan MD Fund, the Fred Simmons and Olga Mohan Fund; the National Cancer Institute, the National Multiple Sclerosis Society, and the National Institute of Neurological Disorders and Stroke. Neelapu reported conflicts of interest with numerous pharmaceutical companies.