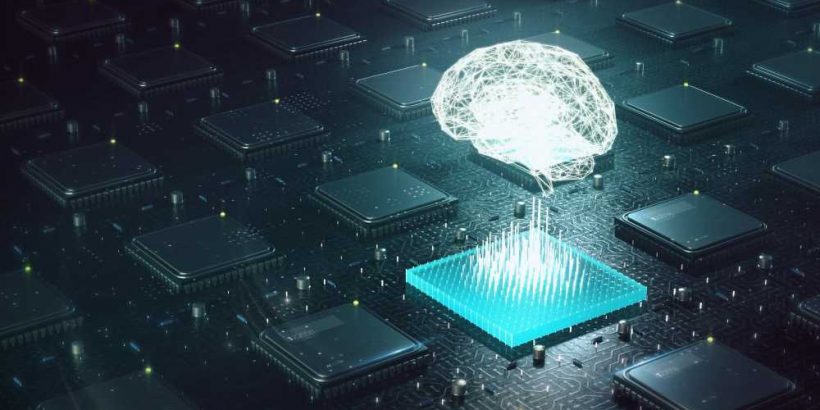 In a recent study published in the Nature Medicine journal, researchers assessed the efficacy of the machine learning model in the prediction of mental health crises.

The timely recognition of individuals at risk of mental health deterioration has been reported to improve disease outcomes. However, manually reviewing patient records to identify such individuals is impractical due to the high number of mental health problems prevalent in society.

In the present study, researchers developed a machine learning model that utilized electronic health records of individuals to surveil them for any risk of a mental health crisis for a duration of 28 days.

The team developed a predictive tool to help healthcare workers streamline caseload priorities while enabling professional intervention that could reduce the risk of a crisis. This was achieved by aligning the prediction target with the service-oriented approach in order to define a crisis as a symptom onset that needed the intervention of healthcare resources. The team generated a dataset that included crisis events that were registered whenever a patient urgently required mental health crisis services, including inpatient admission, emergency assessment of the patient, home treatment assessment, or admission to the hospital.

Furthermore, the prediction target was defined as the beginning of a mental health crisis episode, comprising one or more crisis events that were preceded by a minimum of one whole stable week with no occurrence of any crisis event. Accordingly, the team configured the machine learning model to forecast the onset of the first crisis event in an episode within the duration of the following 28 days. 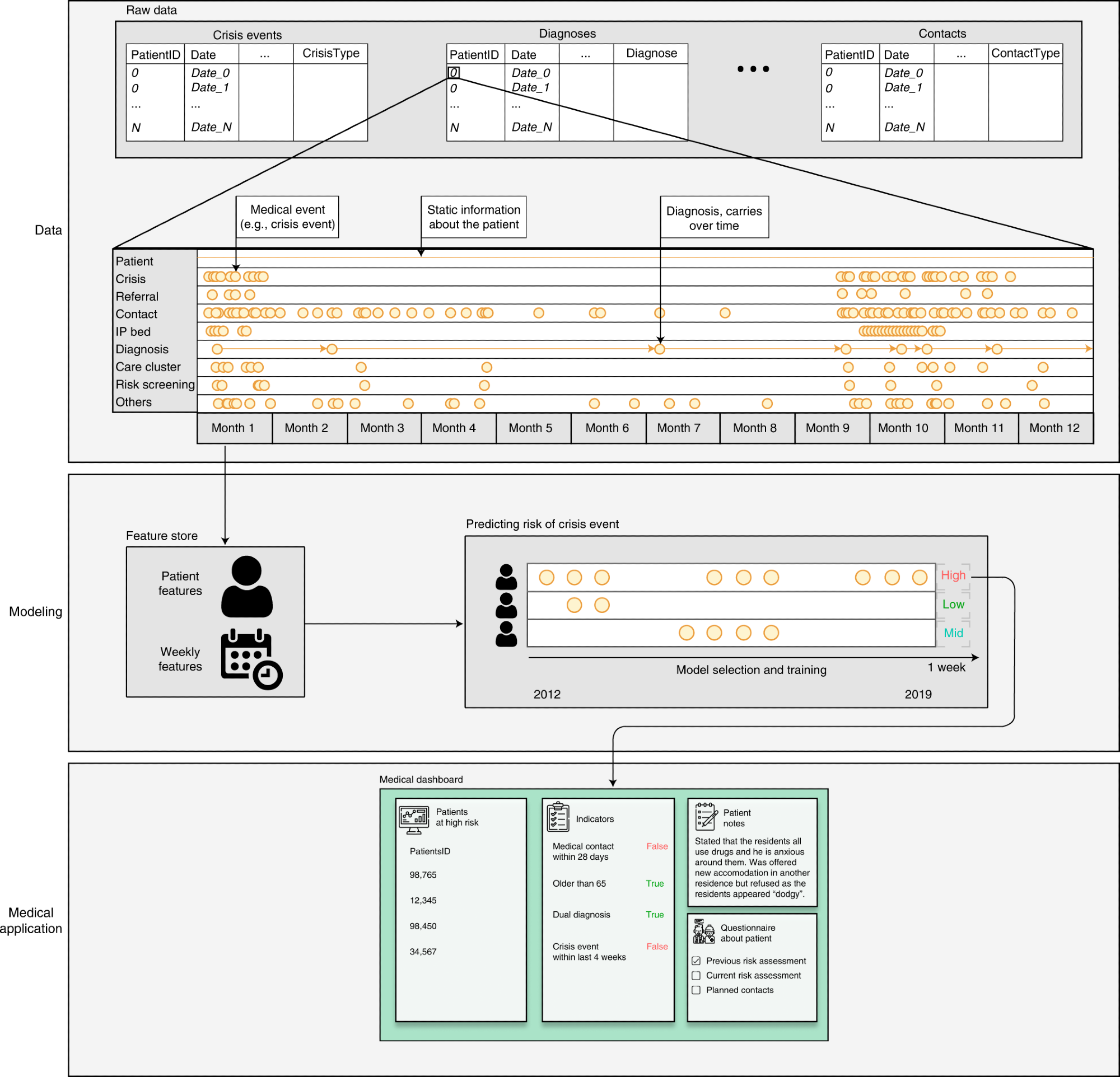 Time series of events are represented with the timestamps and event characteristics in different SQL tables in the hospital’s database. These tables are processed and converted into features for the modeling task. Models are trained, tuned and selected based on the data for the period 2012–2019. The system predicts the risk of crisis onset within the next 28 days (whereby the algorithm is queried every week for every patient). The patients with the highest predicted risk are displayed on the dashboard delivered to clinicians alongside key indicators, patient notes and a questionnaire form about each patient, which the clinician fills out. The icons in this figure were made by Freepik from www.flaticon.com. IP, inpatient.

The team designed the machine learning model such that it allowed queries every week to determine the risk of each patient experiencing a mental health crisis episode in the next 28 days. The model was built by extracting information belonging to three categories: (1) static or semi-static patient data, including information such as sex, age, and International Classification of Diseases 10 (ICD-10)-coded diagnoses; (2) assessments and interactions available with the hospital (3) variables that represented the time duration since the registered events. The model generated a predicted risk score (PRS) between 0 and 1 for each subject.

Machine learning techniques such as decision trees, ensembles, probabilistic, and deep learning-based classifiers were tested. The team subsequently benchmarked the XGBoost (eXtreme gradient boosting) model against two baseline factors, namely the clinical-practice- diagnosis-based baseline model. In addition, the prediction model's performance was evaluated among patients diagnosed with mental health disorders categorized according to the first level of the ICD-10.

Furthermore, the team conducted a prospective study in which machine learning models predicted mental crisis events that were delivered every two weeks to practicing clinicians. This was conducted by querying the model to organize patients in descending order according to the patient’s PRS. 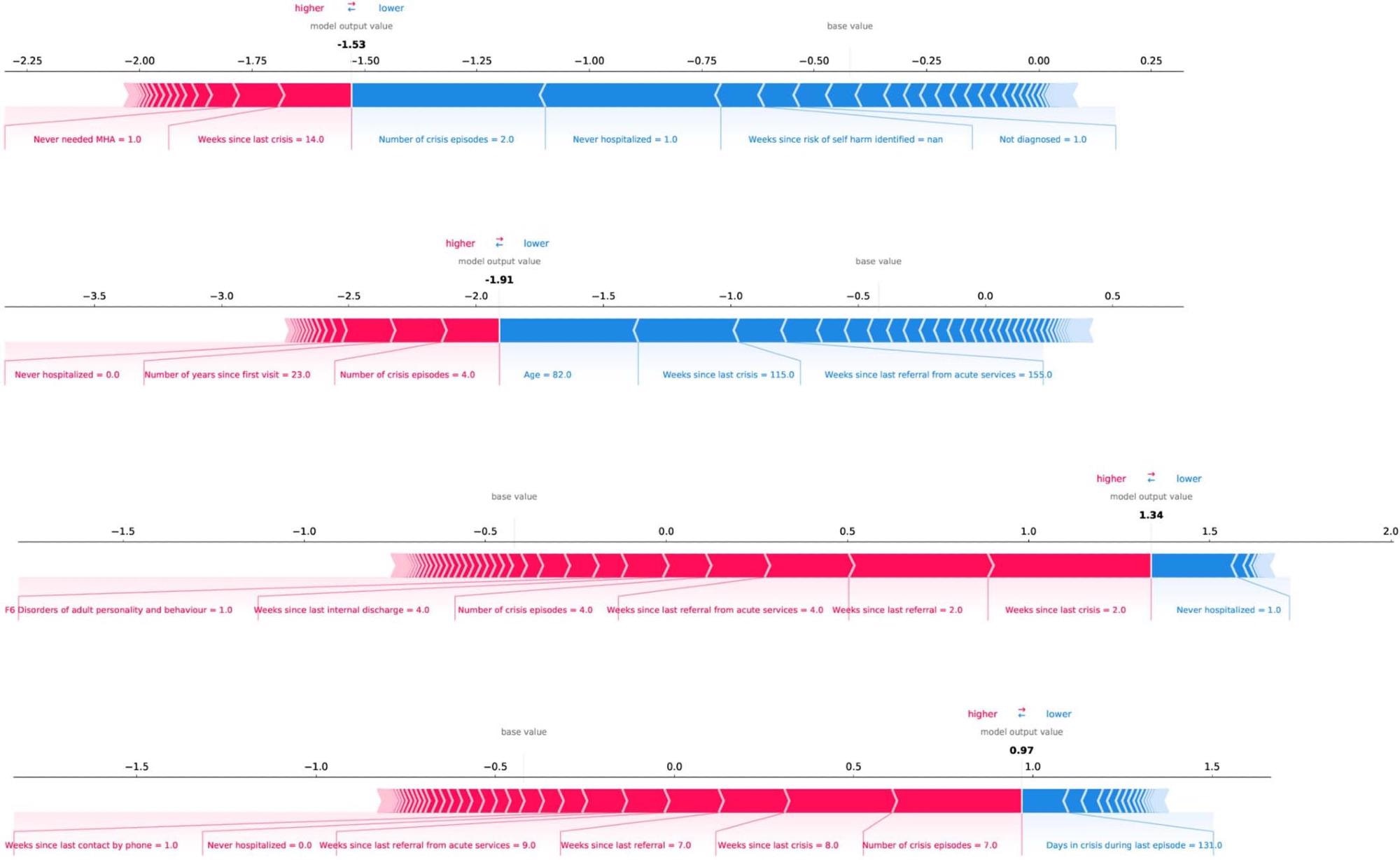 The study cohort included 5,816,586 records that were obtained from 17,122 individual patients aged between 16 and 102 years in the period between September 2012 and November 2018. Patients in the group were diagnosed with numerous disorders, including mood, organic, neurotic, psychotic, and personality disorders. The data set also included 60,388 crisis episodes, with an average of 24 crisis events per episode.

The study shows that machine learning can provide a foundation for facilitating better resource allocation in mental healthcare. Researchers believe the present study can motivate mental health providers to shift from reactive care to preventative care.