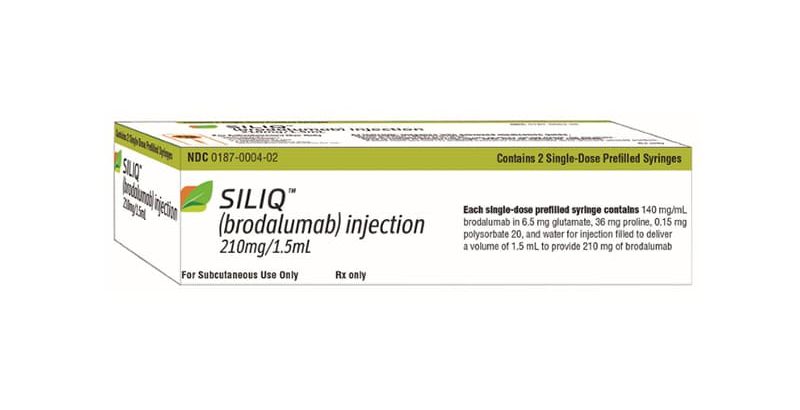 An analysis of postmarketing suicide data shows that the risk of suicide associated with brodalumab use is similar to that of other biologics prescribed for psoriasis.

The Food and Drug Administration approved brodalumab (Siliq) in 2017 for treatment of moderate to severe plaque psoriasis with a boxed warning for suicidal ideation and behavior and an associated Risk Evaluation and Mitigation Strategies (REMS) program indicating an increased risk of suicidality.

Half a decade later, “the available worldwide data do not support the notion that brodalumab has a unique risk of increased suicides,” senior investigator John Koo, MD, and coinvestigators at the University of California, San Francisco, wrote in a preproof article in JAAD International, noting that postmarketing data are “often considered a better reflection of real-world outcomes than clinical trials.”

The researchers extracted data through the end of 2021 on the number of completed suicides for brodalumab and 10 other biologics approved for psoriasis from the FDA’s Adverse Events Reporting System (FAERS), an international publicly available database. The researchers included suicide data on the biologics for all indications.

The authors contacted pharmaceutical companies to determine the total number of patients prescribed each drug, securing mostly “best estimates” data on 5 of the 11 biologics available for psoriasis. The researchers then calculated the number of completed suicides per total number of prescribed patients.

For brodalumab, across 20,871 total prescriptions, there was only one verifiable suicide. It occurred in a Japanese man with terminal cancer and no nearby relatives 36 days after his first dose. The suicide rate for brodalumab was similar to that of ixekizumab, secukinumab, infliximab, and adalimumab.

“Brodalumab is a very efficacious agent and may have the fastest onset of action, yet its usage is minimal compared to the other agents because of this ‘black box’ warning…despite the fact that it’s the least expensive of any biologic,” Koo, professor of dermatology and director of the Psoriasis and Skin Treatment Center, University of California, San Francisco, said in an interview.

Koo, who is board-certified in both dermatology and psychiatry, said he believes the boxed warning was never warranted. All three of the verified completed suicides that occurred during clinical trials of brodalumab for psoriasis were in people who had underlying psychiatric disorders or significant stressors, such as going to jail in one case, and depression and significant isolation in another, he said.

(An analysis of psychiatric adverse events during the psoriasis clinical trials, involving more than 4,000 patients, was published online Oct. 4, 2017, in the Journal of the American Academy of Dermatology.)

George Han, MD, PhD, associate professor and director of research and teledermatology at the Zucker School of Medicine at Hofstra/Northwell, New Hyde Park, N.Y., who was not involved in the research, said the new data is reassuring.

“We sometimes put it into context [in thinking and counseling about risk] that in the trials for brodalumab, the number of suicide attempts [versus completed suicides] was not an outlier,” he said. “But it’s hard to know what to make of that, so this piece of knowledge that the postmarketing data show there’s no safety signal should give people a lot of reassurance.”

Han said he has used the medication, a fully human anti-interleukin 17 receptor A monoclonal antibody, in many patients who “have not done so well on other biologics and it’s been a lifesaver…a couple who have switched over have maintained the longest level of clearance they’ve had with anything. It’s quite striking.”

The efficacy stems at least partly from its mechanism of blocking all cytokines in the IL-17 family — including those involved in the “feedback loops that perpetuate psoriasis” — rather than just one as other biologics do, Han said.

Usage of the drug has been hindered by the black box warning and REMS program, not only because of the extra steps required and hesitation potentially evoked, but because samples are not available, and because the “formulary access is not what it could have been otherwise,” he noted.

The Siliq REMS patient enrollment form requires patients to pledge awareness of the fact that suicidal thoughts and behaviors have occurred in treated patients and that they should seek medical attention if they experience suicidal thoughts or new or worsening depression, anxiety, or other mood changes. Prescribers must be certified with the program and must pledge on each enrollment form that they have counseled their patients.

The box warning states that there is no established causal association between treatment with brodalumab and increased risk for suicidal ideation and behaviors (SIB).

Individuals with psoriasis are an “already vulnerable population” who have been shown in reviews and meta-analyses to have a higher prevalence of depression and a higher risk of SIB than those without the disease, Koo and colleagues wrote in a narrative review published in Cutis.

Regardless of therapy, they wrote in the review, dermatologists should assess for any history of depression and SIB, and evaluate for signs and symptoms of current depression and SIB, referring patients as necessary to primary care or mental health care.

In the psoriasis trials, brodalumab treatment appeared to improve symptoms of depression and anxiety — a finding consistent with the effects reported for other biologic therapies, they wrote.

Siliq is marketed by Valeant Pharmaceuticals.

Koo disclosed that he is an adviser/consultant/speaker for numerous pharmaceutical companies, but not those that were involved in the development of brodalumab. Han said he has relationships with numerous companies, including those that have developed brodalumab and other biologic agents used for psoriasis. The authors declared funding sources as none.